It's a rainy day on the mountain, and a deserved day of rest for out orchard workers. They've been going straight out for two weeks. Most of the apples are going for processing this year, because of so much scab.

I am struggling a bit right now with the dreaded fibro, which has raised its ugly head and decided that it would affect my legs more than usual. It doesn't take much walking to start my legs burning and I even found as I tried to sleep last night that because of sore points, I couldn't get comfortable at all. Oh well, I've been here before. I just hope this doesn't last too long, and that it doesn't get any worse. At least I can still accomplish daily chores even if they do take me longer. One step forward, two steps back.

On to other things.....Sadie and I have been enjoying the new bird feeder I hung in the window. The goldfinch discovered it and have become used to me moving about. Sometimes I startle them, but most of the time I can move, and they will continue to feed. 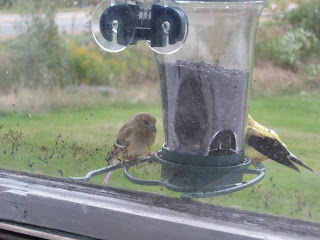 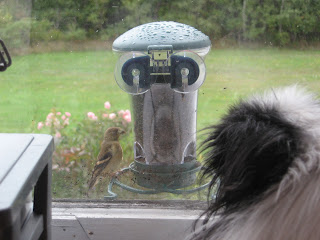 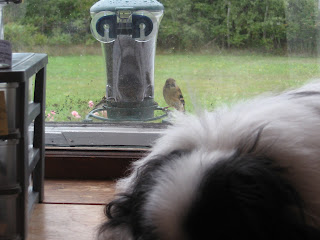 Who's watching who?
We had a lovely day last Sunday. My eldest granddaughter made a decision to be baptised, and though the day threatened rain, it held off and all went well. She has made an important decision in her young life. Though I realize it is not for everyone, in our family it is a special step, taken after much thought. The Baptism took place at a lake near us, and friends and family joined together to witness it. 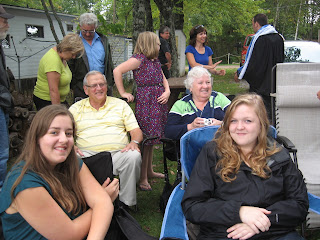 Two of Rae's friends (foreground), Other grandparents, and Lindsay 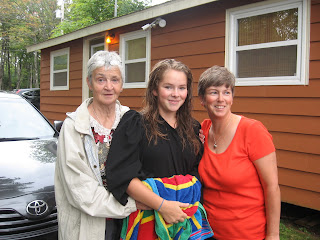 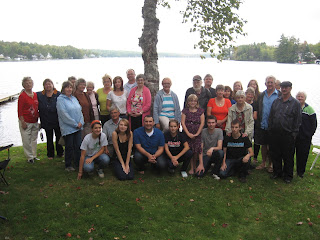 My very special young friends. Love them.
That's it for today.
﻿
Posted by Bonnie at 9:25 AM 2 comments:

I can start posting again. It has been exactly two weeks since the cataract was removed, and I am really doing fine. I had to be very good the first week. One of the things I was not supposed to do was bend over.

Well, I hadn't realized how much I do that requires bending over. A lot of the things I need in the kitchen are in the lower cupboards; getting something from the lower shelves in the fridge; picking up something I dropped; all manner of things.

And then there's Sadie. Her food dish is on the floor, she herself is close to the floor, so that when she wants out, and has to get her leash on, you guessed it, I bend over. So, for the first week, I wished that Sadie was a Saint Bernard, and tried to remember to bend my knees and look straight out, and not down.

Now bending my knees shouldn't be a real problem, for most folk, but having the dreaded fibromyalgia meant that after the first 20 times or so, my legs started to burn a little. Anyhow, I got through it, and the second week went much better, when the Dr. said I could go back to normal activity, and drive the car, and bend over. Hurray!

I only missed one choir practice and one church service, as I have an assistant who took over for me. She's a sweetheart. I did attend church, and it felt very strange sitting in the pew.

That reminds me. I had better wrap this up for now, because it is choir practice night, and I have a job to do.
Posted by Bonnie at 6:55 PM 1 comment:

Eye operation was a success, however I am finding it difficult to spend any time on the computer. It seems one eye is battling the other, or something, and the result is squinting and a headache. So for the time being, I won't be blogging. Hopefully, as the eye heals, I'll be able to catch up on my blog reading, which I miss very much. Thanks for all your kind comments.
Posted by Bonnie at 1:50 PM 2 comments:

I started taking the eye drops necessary before the cataract operation, that is coming up on Thursday.
Two different kinds, four times a day. Most people I have spoken to, say that anyone they know who has had a cataract removed, have been thrilled with the results. That's encouraging.
But....that is not what I was going to write about.

I spotted a big squirrel on the lawn yesterday, so I quickly grabbed the camera and took a picture through the window. It was not the usual little red squirrel. I'll show you. 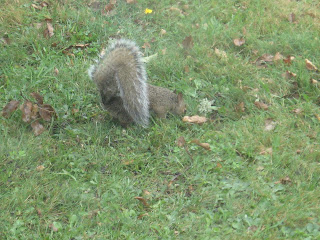 I think this is an Eastern Grey Squirrel 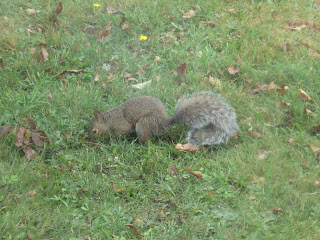 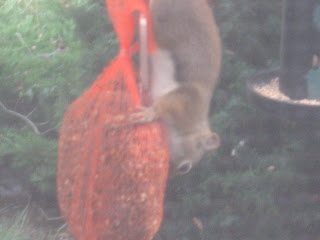 This is the red squirrel that is usually around 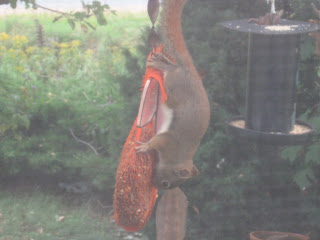 I can't remember seeing a grey squirrel in all the time I've been in NS, but then......I can't remember what I was going to write about.....
I've done some felting lately.....
﻿ 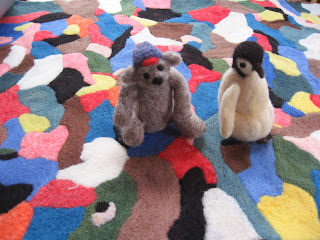 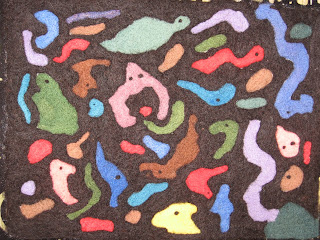 That wasn't what I was going to write about either.
Sadie says, forget it.
I said, I already did.
Nap time 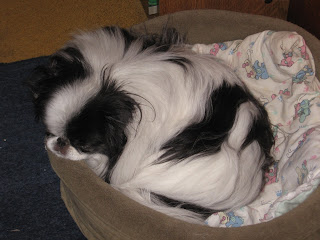