I have a few pictures to show of our changing weather, but I have been thinking a little about our church choir.  It is getting close to our annual meeting at church, and the nomination committee has been busy. The reason I mention the choir, is that as I thought of each one, I realized that besides being in the choir, they are also on or head a committee, sometimes two, or have another position such as bulletin editor, or Food Bank person. They are a great group of people who volunteer their time in a number of ways. That may change, when the nomination committee finishes their job, but from past experience, it won't change much. 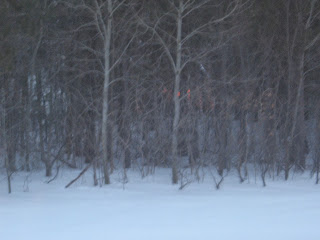 This is the end of last week,
and 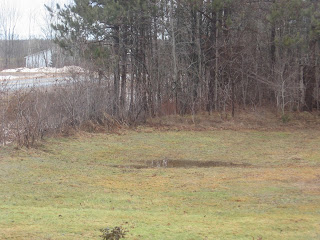 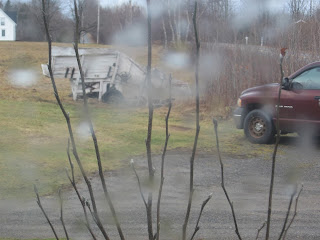 there is still some snow where it has been plowed into a pile
but the ground is soggy because of heavy rainfall on the
weekend.
Needless to say there is a bit of a pond in my basement, and it
will take a while for it to dry up. More rain is expected tonight
I think, or tomorrow.
The sump pump is earning its keep. 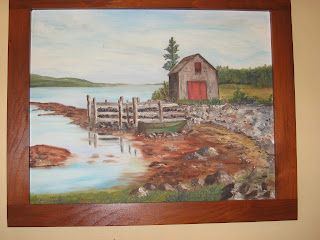 This is a painting I did back in 1983 of Birchtown Bay,
and Shelburne Harbour, in Birchtown NS
where we lived for three years.
This scene could be seen from our dining room window.
I reminds me of my basement floor the way the water hugs the beach. I
have some water areas and some dry areas.


Sadie and I took a little walk around the property, picking up things that had blown around in the past wind. I'm sure I missed some things. I was surprised that there were some things still standing, like the little shed out front. The wind blew very hard, and I thought perhaps I would end up in Kansas.
I realize how little walking I do, because when I came in, I hurt all over. I like to blame that on the weather, but I know it's the fibro acting up. You would think that going up and down steps each day to the basement and the bedroom would count for some activity, but apparently not. I sit to do my painting and crafts or at my laptop, but I have to get up and walk around after a while to walk off the aches. I know sometimes I sit too long at one thing, especially painting, but I sure know it when I move. I just remembered that I need to go and tidy up my bird food and containers. I just left it when I came in from outside.
Last night, just at dusk, there were six deer in our backyard. They were there for about 10-15 minutes at least, munching apples on the ground around the 2 apple trees, and also eating a few of the young branches. I couldn't get a picture because it was so dark, and eventually something startled them and they headed back to the wooded area.﻿
Posted by Bonnie at 3:31 PM 5 comments:

Yes, I can hardly believe my eyes, but I'm pretty sure that right up there, up there above the trees is blue sky, and wait, yes, there is hardly any wind. A little respite from the past days of cloud and snow and cold, cold, cold.

Not that it isn't cold out now, but it is not as cold. The great pile of snow has gone down quite a bit, and best of all the road is bare. There are 'warmer' days ahead, well relatively warmer.

Poor Sadie, has had a terrible time trying to find a place to do her 'business'. Walking on ice is definitely not her favourite thing.

Normalcy has returned, after the Christmas/New Years celebration, and it is back to routine, which I welcome.

Our Pastor and wife have a new addition to their family. A daughter was born on January 31st. So wonderful. The little one was oohed and awed over, by her church family last Sunday. It will be so nice watching her grow, as we did their first daughter. It is going to be fun! Can you imagine it? A two year old and a baby........

I am having a hard time settling into one thing, since Christmas. I have painted some bookmarks, done some writing, needle felting, and reading. I have also been playing my uke. Love it! My young fellow has started back at piano lessons, and pleasantly surprised me by showing how he had worked very hard over the holidays learning to read the notes and know their names.

I have a little squirrel invading my bird feeders, and am not too pleased, but it can't be helped, just so long as it doesn't GET IN THE HOUSE! Pheasant have also paid a visit a few times, during the worst of the days past. I haven't seen them in a while.

Appointment with my doctor, has been cancelled three times, due to weather, and now he's sick. I am not all that disappointed, but felt bad for his secretary who had to make all the calls and change appointment dates. I wouldn't want her job, but she told me, most people are understanding.

Would you believe I took my camera and didn't take one picture. Well that's what happened. Tsk. Tsk.

It was just so great to see Heather and Rupert, and Rupert's mum. Even the weather behaved well, and actually the roads weren't too bad. The wind was blowing and so there were a few places where snow was blowing over the road, but all in all, not too bad. The worst roads are the ones closest to home, especially the one that runs in front of this house.

The sun shone after the day began with snow showers, off the bay, as the saying goes. I just love the showers off the bay....... Dawn did the driving, and was cautious, which pleased her mother very much. You just never know when you are going to find ice. Some drivers, however, seem to throw safety into the backseat and drive like fools. They are the ones that you expect to see in the ditch, just around the curve.

We spent just a few minutes with the sheep, because it was really, really cold. My, I wish this freezing weather would ease up. I think it is going to be even colder tomorrow.

Icicles hanging from the roof eaves 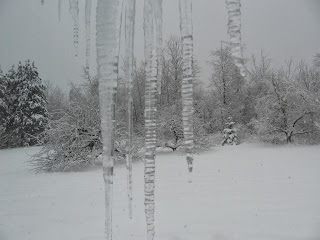 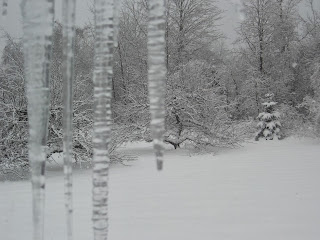 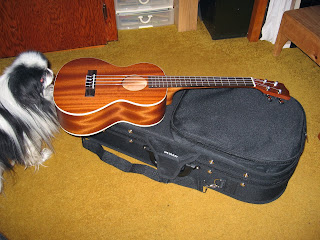 And this is my gift from Heather, Rupert and Dawn - A Ukulele!!!!!!!
LOVE IT! LOVE IT! LOVE IT!
And it has it own case!!!!
It was a marvelous surprise.
So my day was lovely, and I am thankful and blessed.
Thank you Dawn, Rae, Lindsay, Heather and Rupert.﻿