I have never been 'into' a big celebration for New Years, not since our early years in the air force when there were lots of young couples getting together to celebrate. As the years moved on, past the time when our daughters wanted and tried so hard to stay up past midnight, and most times failed, on to the post air force period and into the farming phase, and the captain, not being very social, our New Years Eve was spent watching the TV and the Canadian Air Farce.

I sit here today, thankful that a dear plumber came and fixed our water pump. Not till you don't have it, do you miss being able to go to the tap and turn it on. Some fixtures were replaced, but there is still the possibility that dirt will again get into the system. New pipes need to be put on, but that is a job for spring.

I will be on the road tomorrow, heading to Ironwood to see Heather. Dawn and the girls and I will make the trip. The captain does not do Family. It will be great to see Heather.

I have managed to take down the trees, but the decorations are sitting on the chair and piano bench, awaiting the time they will be put away, and that won't be today. The first order of business is laundry, since I now have water.

I am not in the greatest of moods today. There are a number of reasons why, I suppose, but where the start of a new year should be something to look forward to, there are some things that I do not look forward to. Perhaps that is just because I need to take one day at a time. I also need to stop comparing my life with others. I'm sure someone famous or infamous said you have to play with the cards you are dealt.

That being said, I am glad that we will be getting back to normal activities, like choir practice and Bible Study, and my little piano student coming for lessons. The dear little guy gave Sadie a toy for Christmas. It was sweet of him.

There are some things that don't take into consideration that this is a holiday period. It could be snow storms that throw lots of folk into the darkness, with no power for days, the people who work on the downed power lines, those who organize the ones who work on the lines, the snowplow drivers, who didn't get to spend Christmas with their families,and last but not least, water pumps decide to quit....affecting me personally.....

Oh yes. My water pump decided to not shut off when it should, and so we had to flip the switch off. Hopefully, I will have a plumber come tomorrow morning, and find out what is wrong. It has been interesting to not have running water, but not really that bad. We always have water jugs on hand, in case the power goes out, and so we had water. Dear daughter lives down the road, and so we could get more when needed. It is amazing how often one goes to the tap to get a drink of water. I hope that tomorrow I shall be able to go back to using the tap.

We finally had a church service, yesterday. It was so nice to see everyone again. My dear, fantastic choir did themselves proud. Having missed two Sundays, we decided to do three songs yesterday, since they were all Christmas songs. This choir is not very big. When all are present there are nine members. Yesterday we had seven. They sang the specials beautifully, one after another, like a mini cantata, and did a wonderful job. I was so pleased with them. They are a very special group of people, and I love them dearly.

Now the year is quickly coming to a close, and a new one soon to begin. I do not make resolutions, so will not be making a list. I think I will soon take down the Christmas tree. (That will be when I think I have enough energy). I decorated for Christmas over a period of two weeks. Now I'm thinking it will take me that long to get things put away.

There is still ice on the trees, and a lot of the birches around are drooping right to the ground. I wonder if the past two weeks are an indication of the winter yet to come. 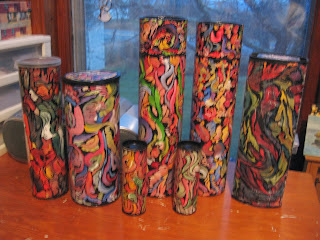 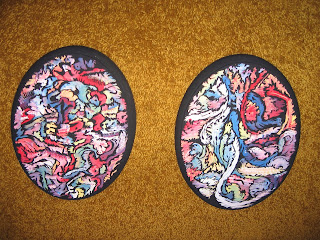 Some of the things I have painted and gave as gifts 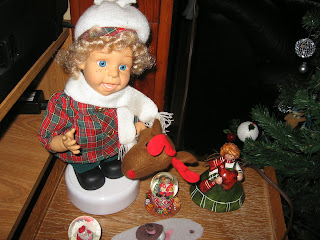 I just think this little guy is cute. Have had him a long time


Wishing everyone a Happy New Year from Sadie and I. 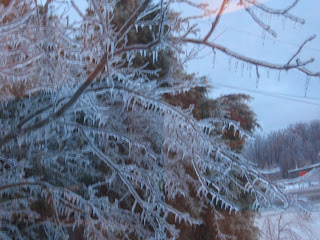 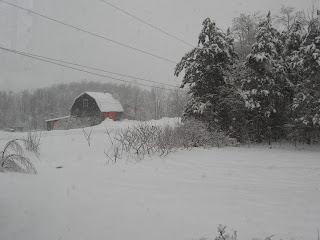 Quiet and lovely
I am waiting for my girls to arrive for presents and Christmas goodies. We survived quite handily a power outage on the past Monday. The Youth Christmas presentation was cancelled on Sunday evening, and even though the power was out on Monday, they decided to go ahead. Everyone was asked to brings flashlights and other battery run torches, and the service was on. It was most beautiful! The Young People really did a wonderful job, and it was very meaningful. We had a gathering time after the service with refreshments which was also lit by lanterns. Sorry, no coffee, which I sorely needed. As I was chatting with a dear friend, I spotted something quite peculiar. Then I realized that Rudolph had joined us. I knew it was him, by his bright red nose, and his prancing across the floor. He disappeared just as fast as he had arrived, but it was so nice of him to drop by.
﻿
Because we had missed two weeks of services, we also had a short Christmas Eve Service, then it was home for many, to spend time with families, gathered to celebrate.

I appreciate so much, all my blogging friends, whose blogs make my day. It is so nice to see the similarities and the differences in other places in the blogisphere. They are such wonderful, interesting people.

And so to my blog readers, Sadie and I wish you a very wonderful Christmas, and may you be filled with the love, joy and peace of this special time of year. 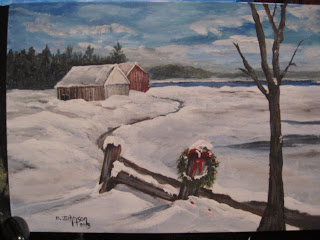 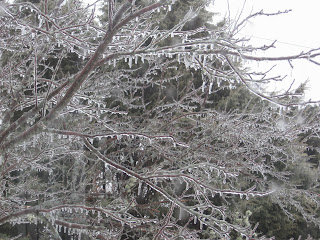 Freezing rain, building up on branches 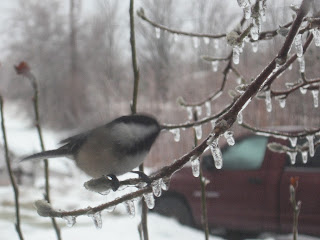 I changed my feeder station, because there was so much
snow, I couldn't get to them where they were before. 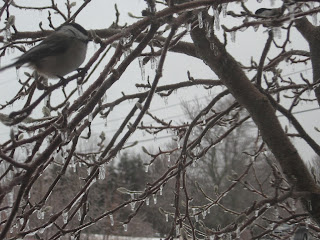 For the 2nd week in a row, we have cancelled our Worship Service. Last week it was a snow storm, one of two, and this week, it is the freezing rain. This system of bad weather stretches from my old hometown, Windsor, Ontario, to the Atlantic Provinces. Some of us are getting just a lot of rain, others, freezing rain, and yet others, snow. Any way you look at it, it is not a great day to be on the roads.
It certainly doesn't seem a lot like Christmas for me, since the Church Services are what really holds the message of Christmas, the celebration of  Christmas Joy and Peace. Without them the experience of this season is left wanting.
Christmas music, which speaks to my heart, is not the same when one is alone. It is with the church family, and our little choir, where the real Spirit of Christmas speaks. I am missing this experience very much. I also miss giving and receiving Christmas Hugs.
Listening to the news, and there are lots of warnings of bad roads, flight cancellations, power outages, and downed trees on wires. A few cars are travelling our road, but not many, and this is supposed to keep up all day, with snow and ice pellets to come. My goodness, I sound like the weather reporter. 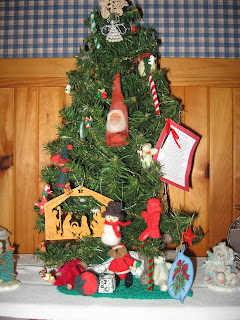 My very little Christmas Tree
with some homemade ornaments 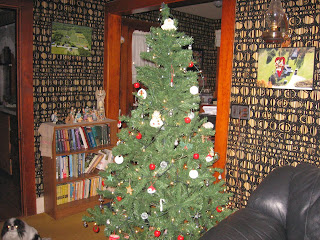 Sadie looks a bit spooky in this shot
﻿

A big storm is heading our way.
It is supposed to hit us on Sunday.
But much to my dismay,
We had showers off the bay, today!
The skiers are shouting hooray,
Drivers couldn't find their way.
It's too cold for kids to play.
So I just want to say,
In my warm house I'll stay!
Posted by Bonnie at 7:03 PM 10 comments:

Ah, today I made cookies, a new recipe that I got from the internet, and proceeded to follow it......almost.

Dear readers, I am not known for my prowess in the kitchen, and I fear that as hard as I try, I will never ever be adept at cooking, any kind of cooking.

Tomorrow, perhaps, I will make the same cookies over again, and see what happens when I include a whole cup of butter as opposed to the 1/2 cup I put in today, and then wondered why the dough could not be rolled out.

Solution....pick up dough with a spoon, squeeze in hand and lay carefully on pan. Voila..15 minutes later I have something that could be called a cookie, that didn't taste too bad, but were definitely not what I had intended. It took me until I finished and was cleaning up to notice the recipe and see just what I had done wrong.
Doingg!

I said to myself, "Self, pay more attention to what you are doing."
Self said, "Why? This is the real me."

Later - - - -
Well, I said that the cookies didn't taste too bad, and that's true, however, after having cooled, I found that they were a little crunchy, even hard, dare I say, and so I have created a new Christmas cookie --


Christmas Rocks
Just think of the uses: They could be used to weigh down the toes of your Christmas stockings,
they could be sucked on like candy until soft enough to eat, perhaps if painted black they could be used as weirdly shaped hockey pucks on the backyard rink, or I could paint them and they could be used as paper weights.........
I am not sure I want to attempt this recipe again tomorrow. I'll see how I'm feeling.
I was going to put the tree up today, but cooking must have taken a lot out of me. I went upstairs to get the tree, and saw the bed, and said to myself, "Put the tree up, or have a nap?' I really wanted to put the tree up, but Self thought the bed looked so cozy, and Self and I had a bit of a lay down.
Perhaps I will put the tree up tomorrow, rather than making cookies.
I get so angry when I make stupid mistakes, as with the cookies. All of my friends are great cooks, and can spend a whole day baking yummy things. Aren't all moms and grammys supposed to be good cooks?
And now, I am tired again. It has been really cold all day, and the roads were not very good, especially up here on the mountain. I'm glad I spent the afternoon ruining a cookie recipe, rather than going out on the road. ﻿
Posted by Bonnie at 7:20 PM 10 comments: