The last day of February is trying to pretend that it belongs to a beautiful month. I'm not buying it, even though I do appreciate the sun and the blue sky. February, you have been a hard month, and I am not sad to see you go. I will welcome March, even though the days will still be cold, we are creeping closer to Spring, which will officially arrive on March 20th I believe.

I have been keeping my days full, doing a variety of things. I still have not finished the new painting, but it is coming along, slowly.


Pictures below are of a few of my rocks, and I have set some of my latest felted bears among them.﻿ 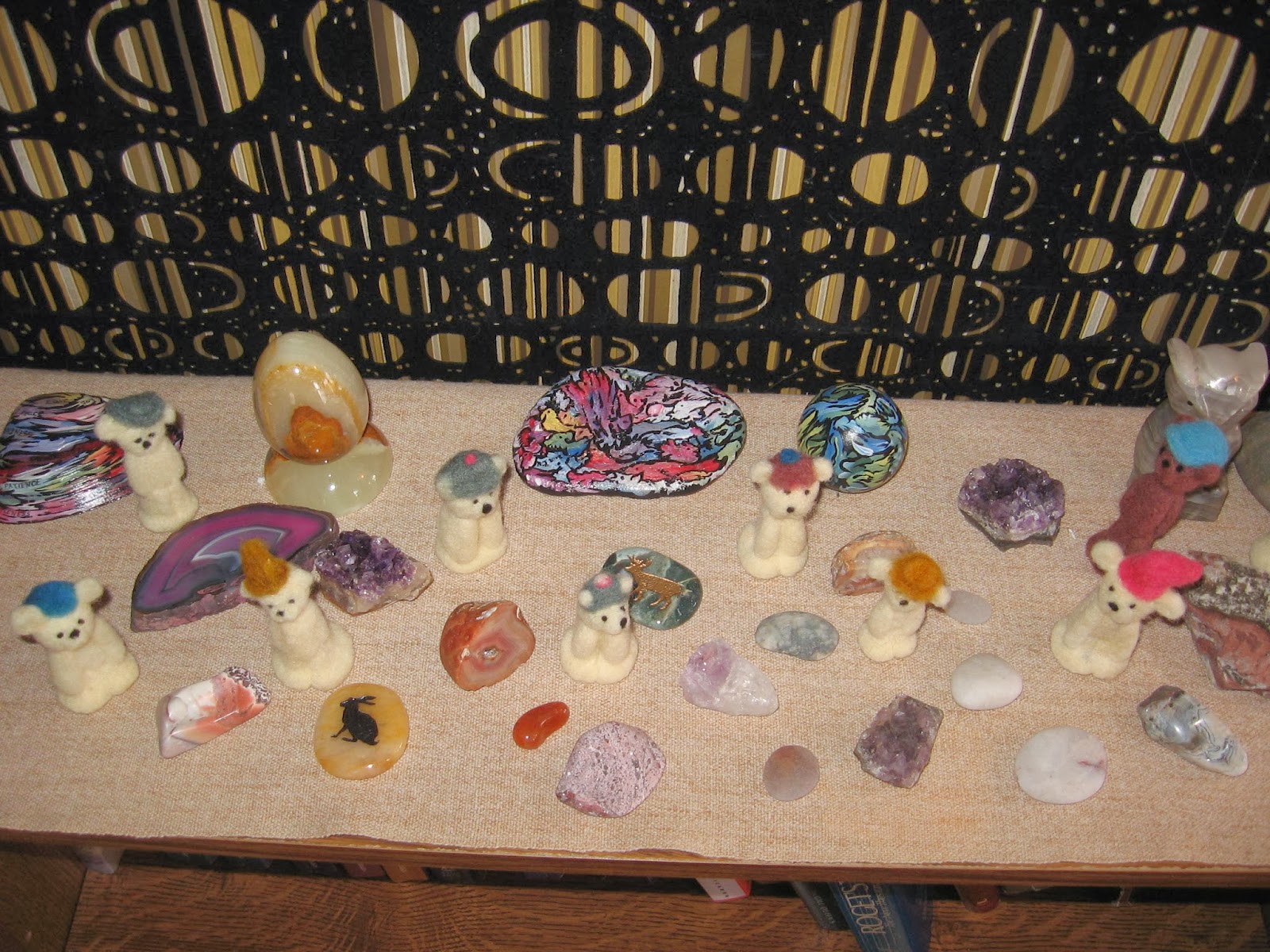 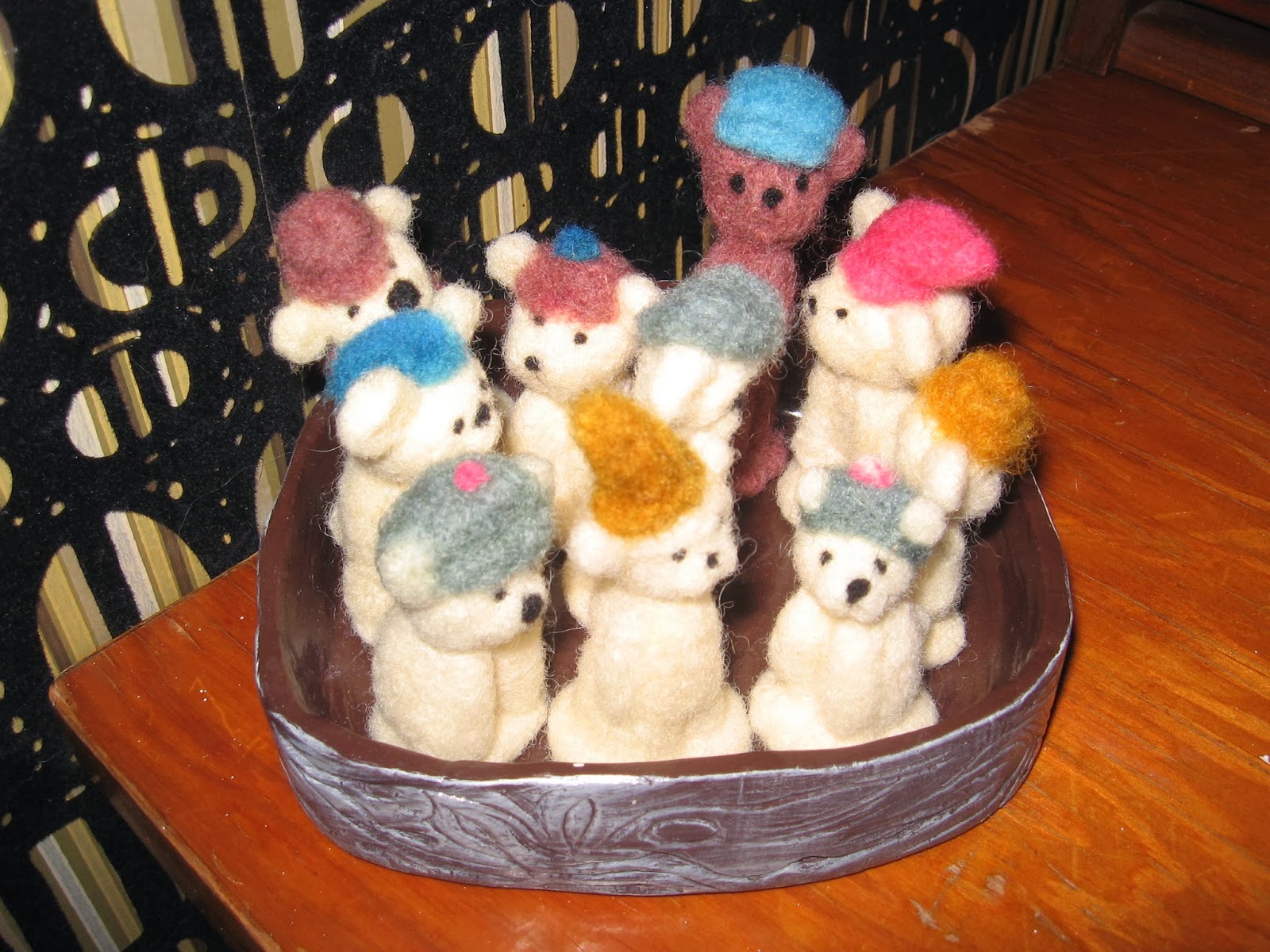 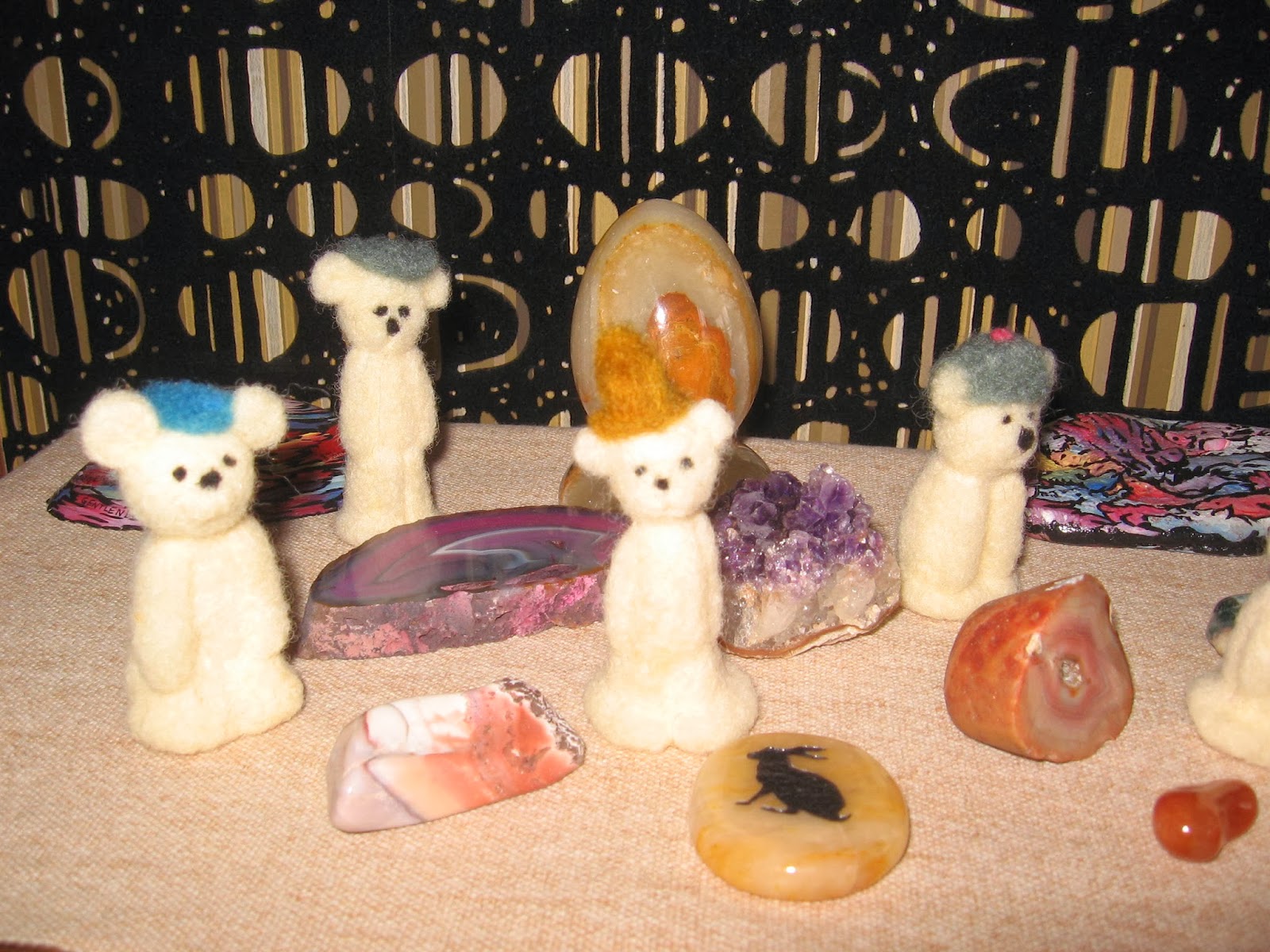 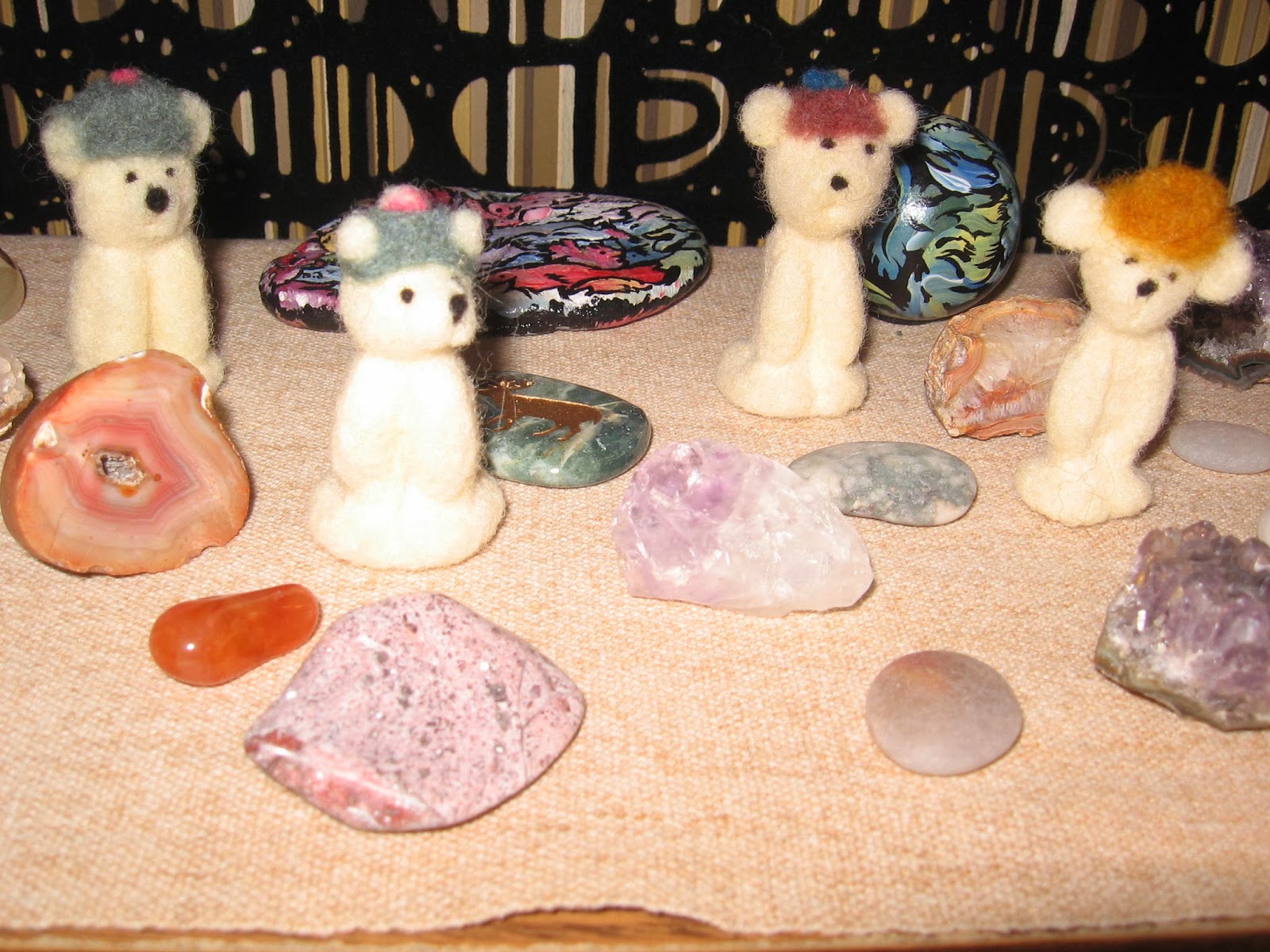 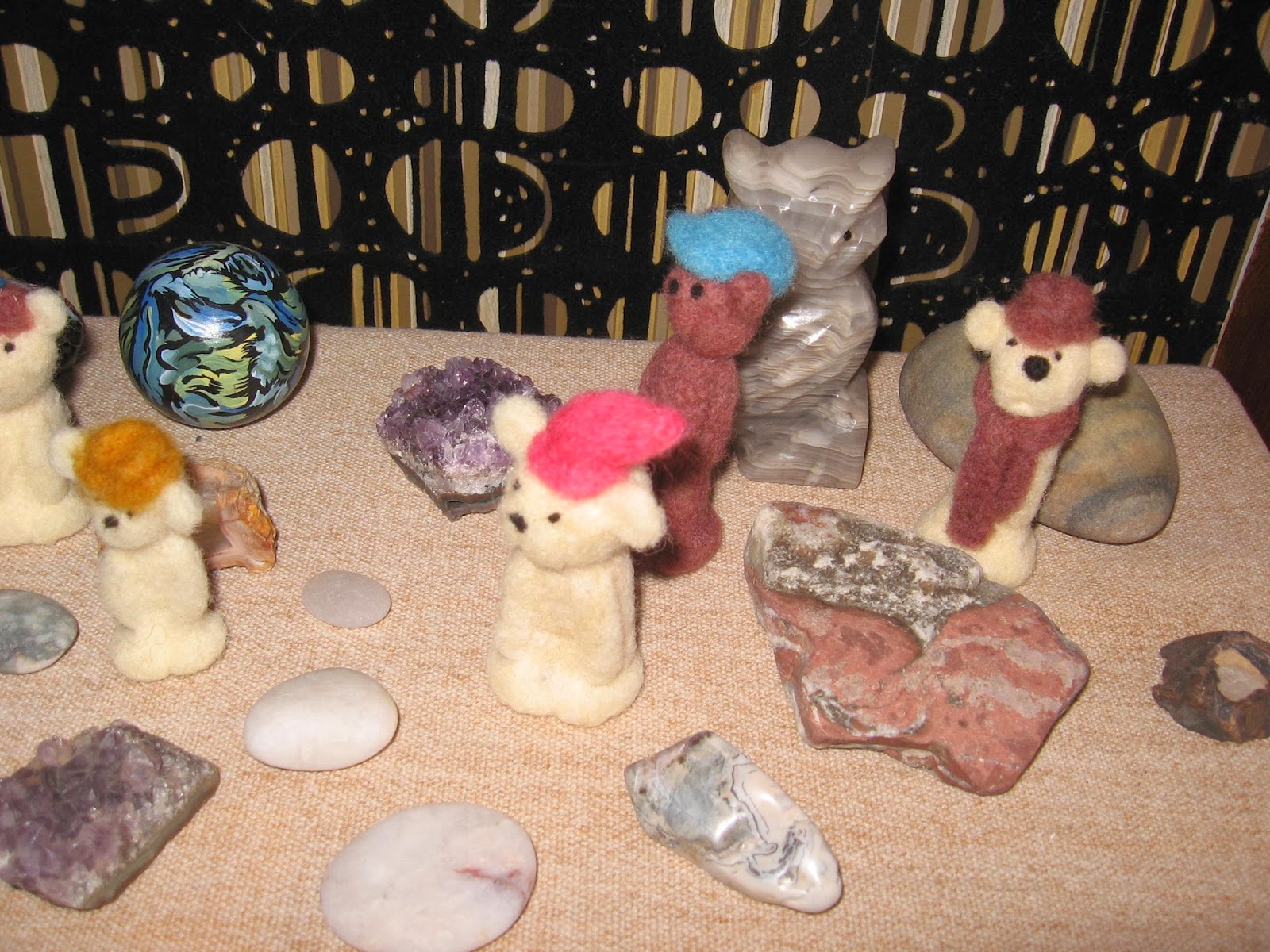 I must still be a child at heart. I like making and looking at these little bears. Each one comes out different, even though I start out the same.


And of course, another picture of Sir Scoundrel the Squirrel. He is still driving me "nuts". 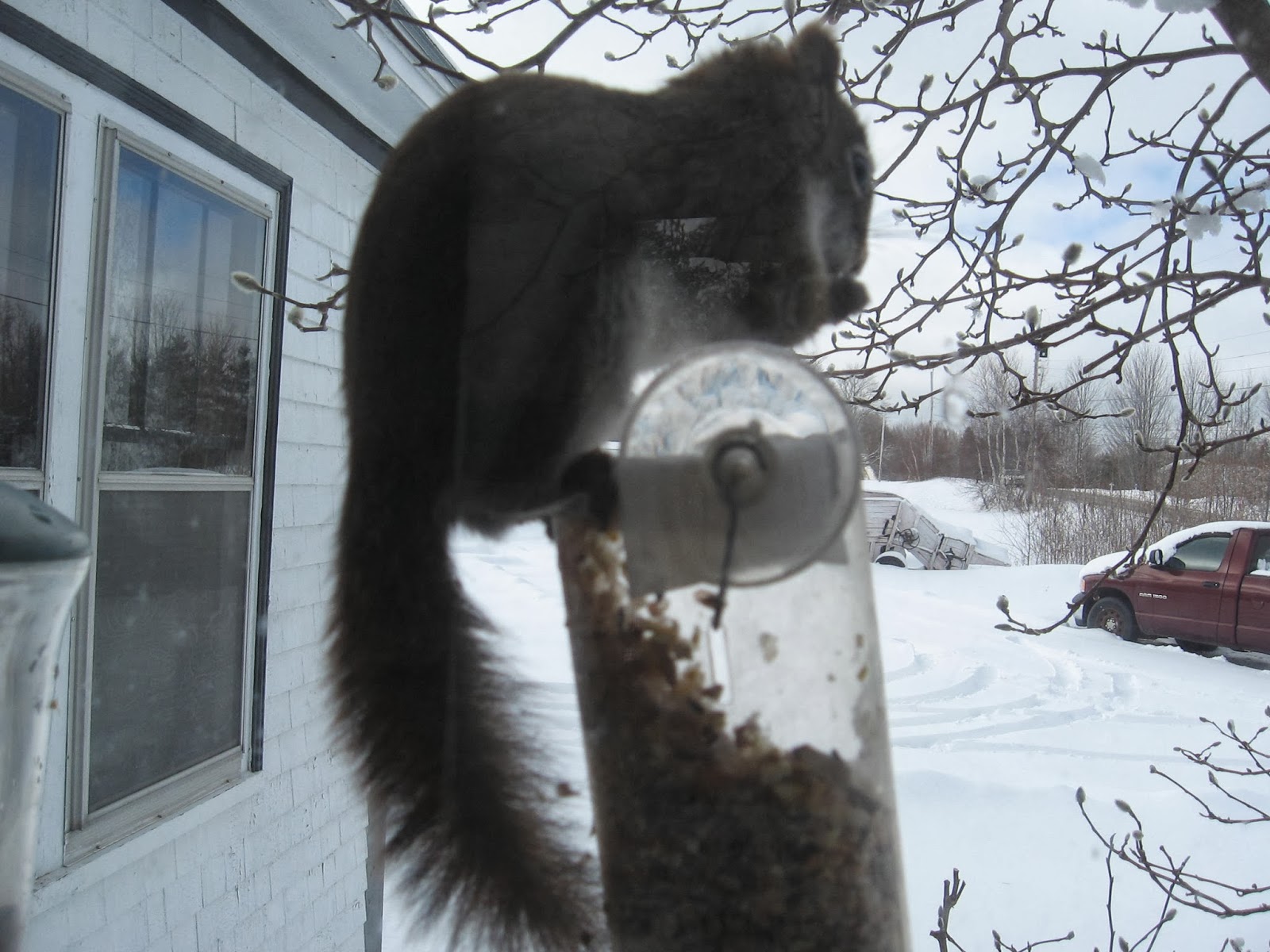 Well, that is all for now. I'll be going on a bit of a road trip tomorrow to watch my oldest granddaughter play in the Provincial Basketball Finals.
It would be wonderful if they won,
they have a great team, and it would be
a perfect birthday gift for her on her 17th. birthday.
Hoping for warmer weather soon.
Think Spring.
Stay warm.
Posted by Bonnie at 1:09 PM 6 comments:

The sun is shining and it is a beautiful day today! There is blue sky and a bare road out front. Very nice, for a change. We had rain last night, and thunder and lightening, and this morning the driveway is a skating rink, but since the temperature is above zero, perhaps it will have melted by day's end.
It is amazing how the spirit can be lifted by a little sun.

There is not much news from the mountain. One day follows another, and this past week, it has been one storm followed by another, so today is a nice respite. Little Sadie is not pleased with the skating rink, as she finds it so difficult to walk on. Her paws are about the size of a quarter, and it makes walking very difficult.
She stands on the porch looking out as if she is searching for a clear patch, and right now there is none to be found.

I have been struggling with high blood pressure, and so I bought a Blood Pressure Kit, so that I can take it every day. It always seems so high at the doctor's but this morning it was pretty good. Perhaps I am more relaxed at home. I will keep monitoring it for three weeks and see how it goes.
The doctor is trying to decide whether my almost constant headache is from the fibro, (which is what I think), or from the high blood pressure. We will see.

I have been working on a new painting, one I have thought about doing for probably a year now. It is a difficult one, and I am having a few problems. Sometimes, a day or two will go by, without my picking up a brush. It is not an abstract this time, but a picture of a woman and a horse. My mind is having a battle between I can't do this and just keep at it. It is a challenge, and that is good.

I have been watching some of the Olympics. I detest the headlines that say a certain competitor had "to settle for silver" or "bronze". My goodness, they are all Olympians, and it took a lot for each one to even get there. They should be celebrated no matter where they place.


Beautiful blue, cloudless sky
Sun shining on the melting ice and snow.
Ah, Spring, I am anxious for your coming.
There is just a month to go.
I HOPE!﻿

Yes, I have my dear old computer back and working thanks to J. Bless his sweet heart! However, we are not sure how long it will keep working. When it is turned off, it really does not want to turn back on.

I will be going on a shopping trip soon, looking at new laptops. I will miss this one, because I am used to it, and according the J. I will need to do some 'learning' with a new one. Hope I am up to it. J. thinks I am.

In the meantime it is so good to have my email back. There were quite a few waiting for me.
I am back just in time to tell you that we are in for another storm tonight. I'm not sure how hard it will hit us, but New Brunswick is supposed to get a bad one.

That is it for now.

I fear my laptop is about to die and if that happens, I won't be posting for a while. It is getting slower and slower, and doing strange things, such as not responding at all, with a black screen. I have coaxed it back a few times but one of these days.....well, you know......

I see a new laptop in my near future.

There is a slight dusting of new snow on the ground, and it looks rather pretty. We were supposed to get quite a bit of snow on Tuesday evening and through the night, but I don't think we received as much as forecast. There was enough to plow, but not overwhelming as it has been in the past.

The Olympic coverage begins today, but I am not sure how much I will watch. So much money has been spent by Russia on these games, it boggles the mind. Cheering for the Canadian team, and hoping that all will be safe, as the days progress.

I had a visit this week from a young couple, the grandson of a friend, and his wife. It was a very nice time spent catching up on what was happening in their young lives. What pleased me was that they wanted to visit with me, just to say hello. I have known the young man since he was a little boy, and it is heartwarming to think that he wanted to visit.

I have kept busy felting and painting, doing a bit of writing, and of course reading. I bought a book by Rita MacNeil, 'On a Personal Note', which I have just begun, and a CD of her songs called Travelling On. I really liked Rita, and saw her once, a long time ago, before she was 'famous'.  Dear Rita. 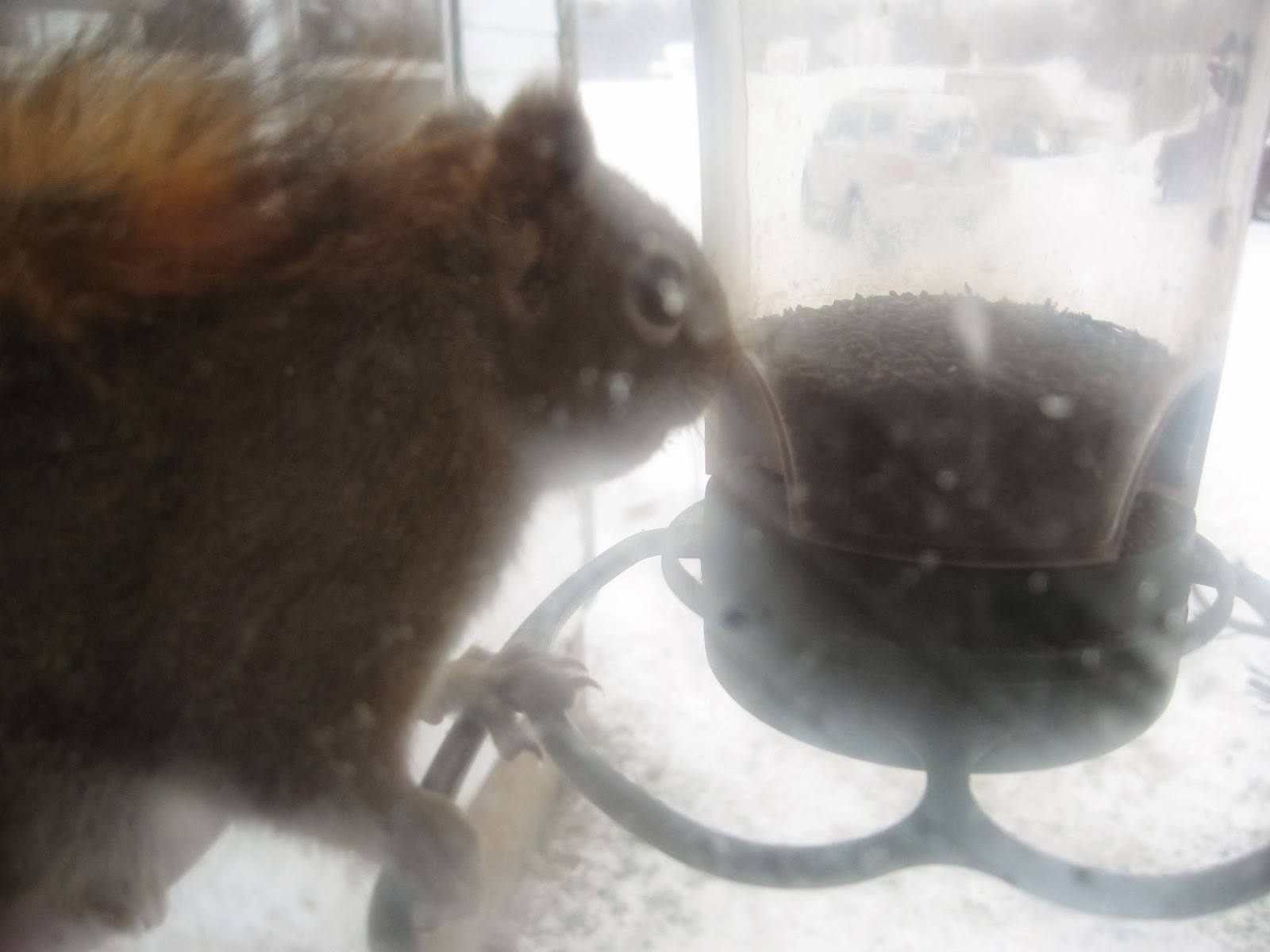 The little squirrel that has been robbing the bird feeder
He was on one side of the window, and I was just inside. 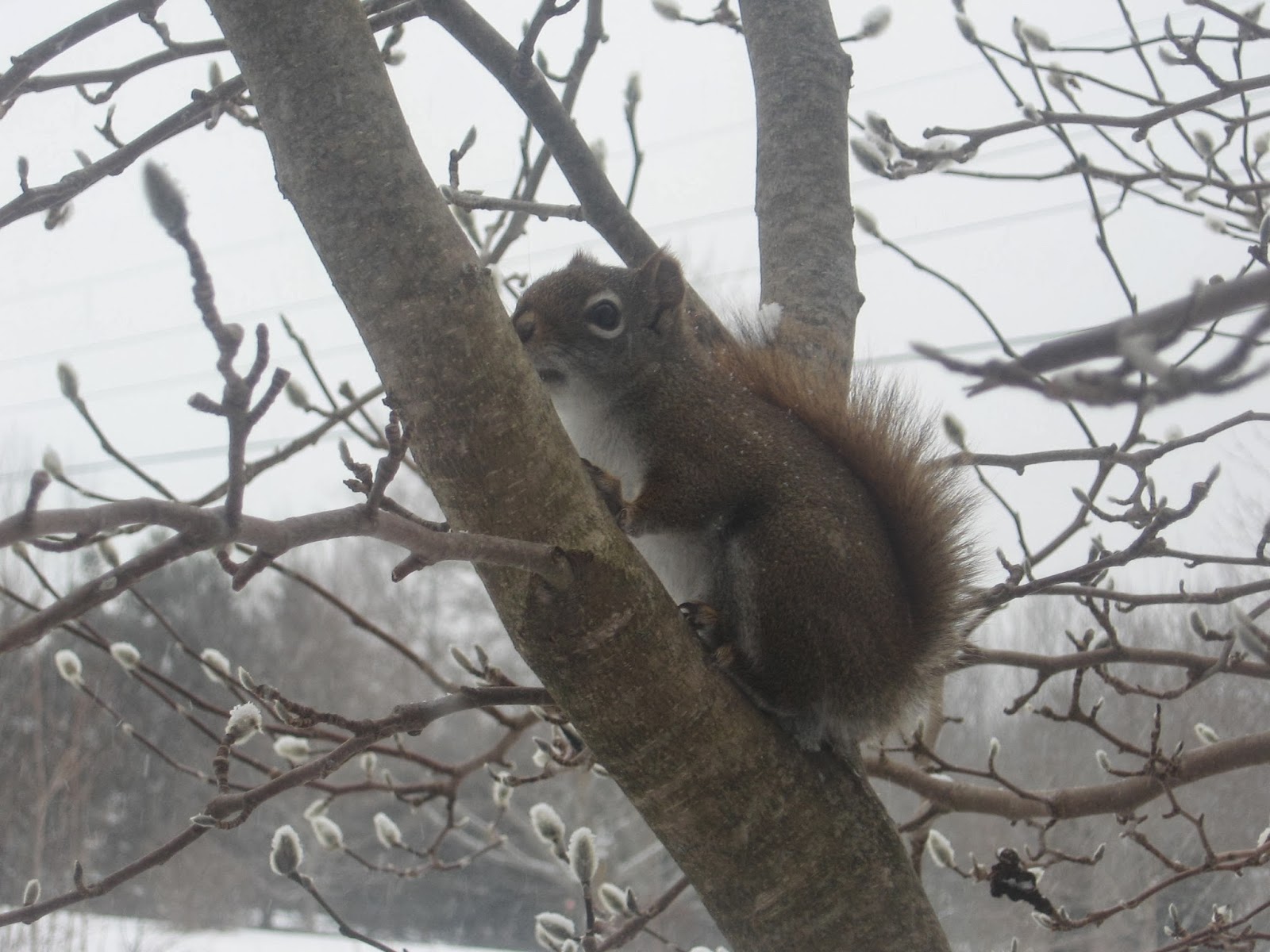 He was chattering away at me, letting me know
that he was not happy with my interference 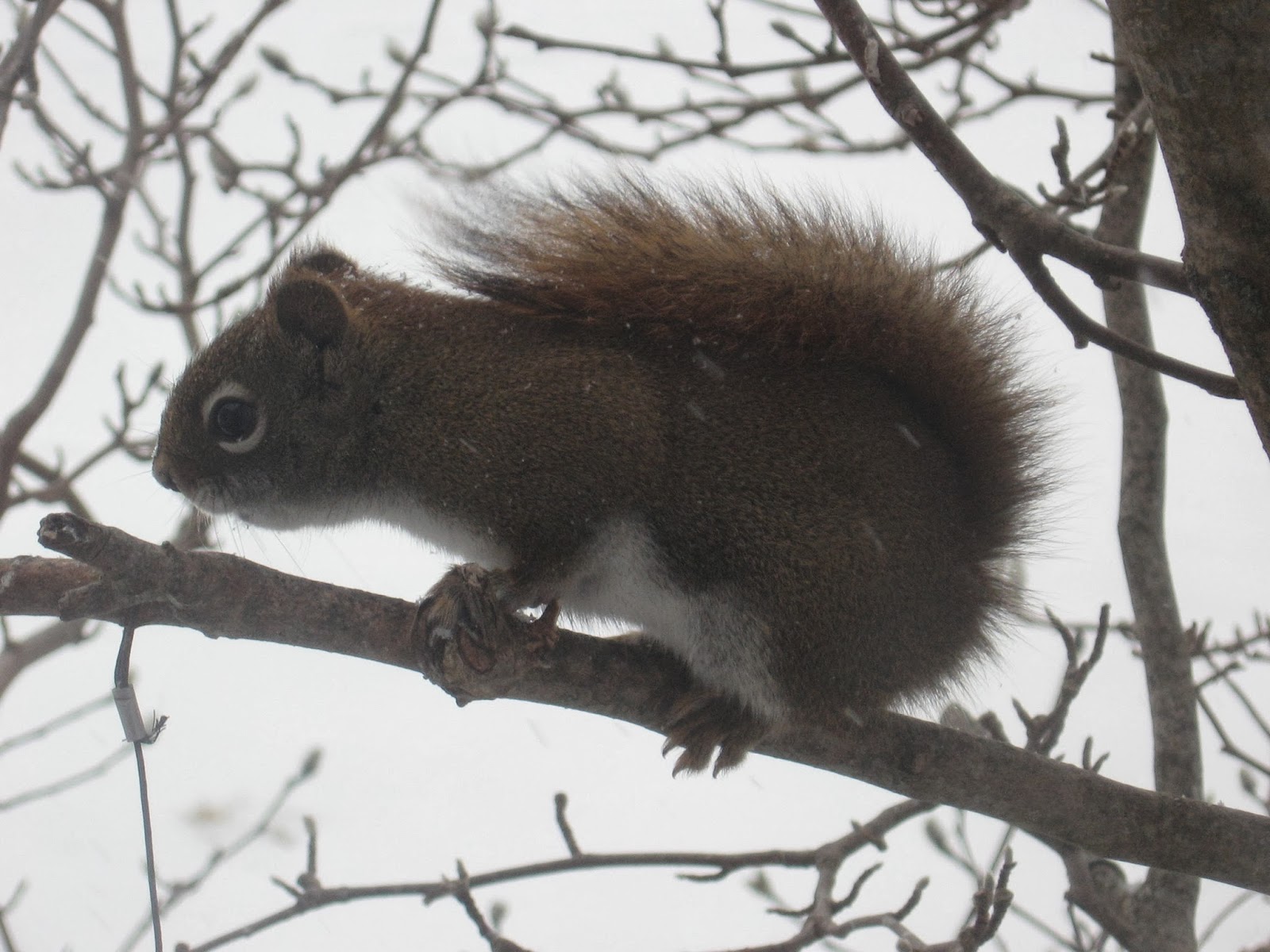 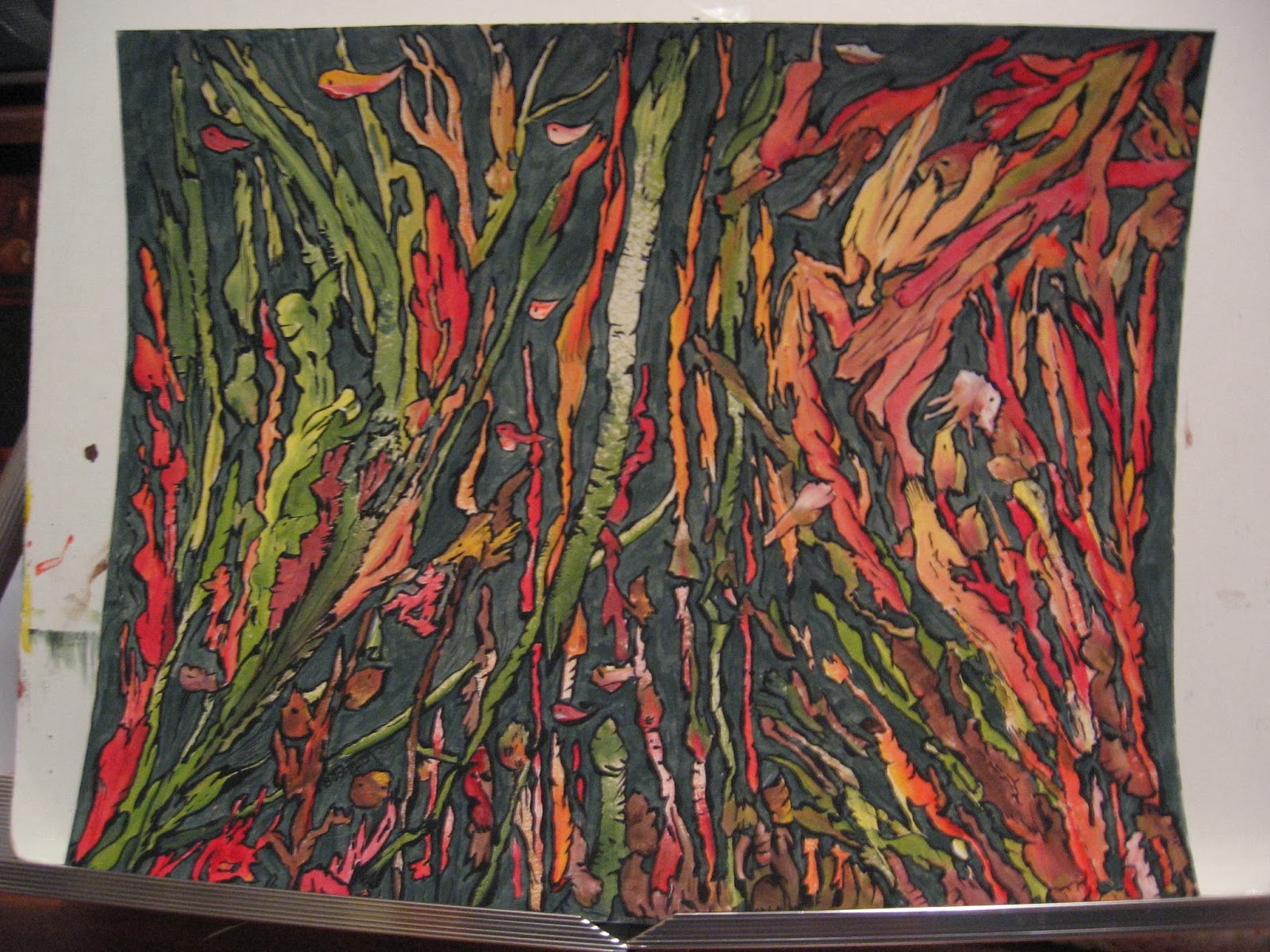 My latest abstract.
It reminds me a bit of 'under the sea', with different
kinds of seaweed, and little creatures.
It is strange what comes out of my head.
I have some Women's Institute pins to paint for a local group, so that occupies some of my time.
As I look out the window, there is blue sky above, and very little wind, a nice day ahead, though still very cold. I know that good old Spring is coming.............patience, Bonnie. Patience.﻿
Posted by Bonnie at 8:54 AM 6 comments:

February, having just made her arrival is about to dump some more snow upon this soggy land. At this point, I haven't even bothered to listen or look at how much is expected. I am just happy that January has ended.  It was not a great month, and I am glad to give February the chance to live up to Shubenacadie Sam's prediction of an early Spring. I realize that there are differing opinions from the various rodent forecasters, but I prefer the idea of an early spring. Spring....ah......C'mon Sam, I'm trusting in you. Hah!

January really wasn't a very pleasant month in several ways. The weather went from snow to rain to blizzard conditions to wind warnings and heavy rain warnings to heavy snow and back to rain, in any order you choose.

I lost another special friend in January, as well. It was one of those times where because of how badly she was suffering with bone cancer, you wouldn't want her to suffer anymore, and yet the thought that she wouldn't be around anymore was so sad. She was a delight, a very strong woman, 84 years young, and with a great outlook. She was the one who cajoled me into joining her in teaching Sunday school, where we spent a lot of years together, and then resigned at the same time. She and her husband raised 6 children on a big farm in our community, and she could master anything that had to be done on that farm, it seemed. She milked cows, worked in the woods, drove tractor, ran a Farm Guest House for years, and had boarders at different times, and was always busy in the church. She will be missed so much.

These pictures have no other reason for being posted here other than the fact that I was looking at them a few days ago. They were taken on Grand Manan last summer, and I was just remembering how nice it was. 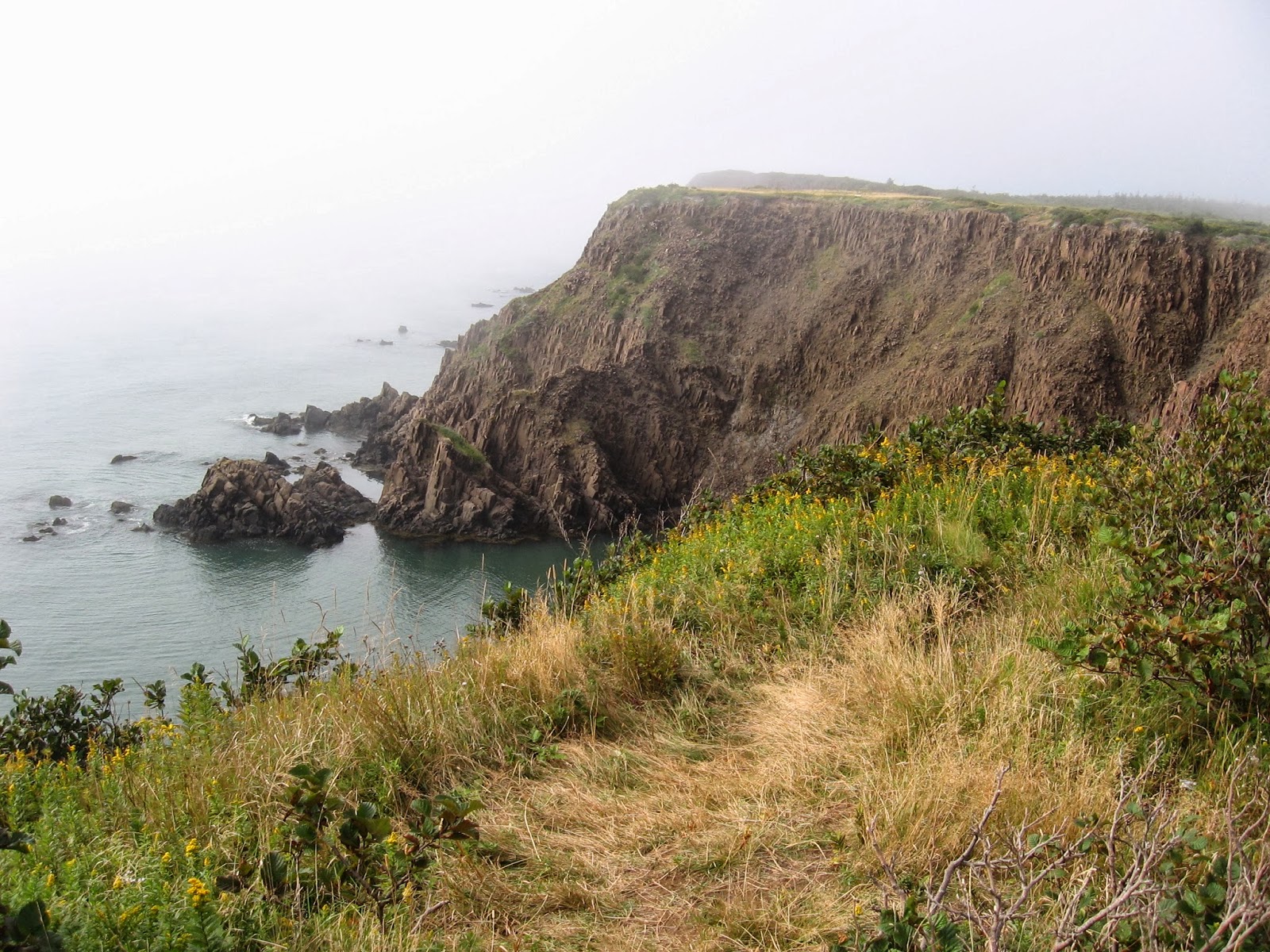 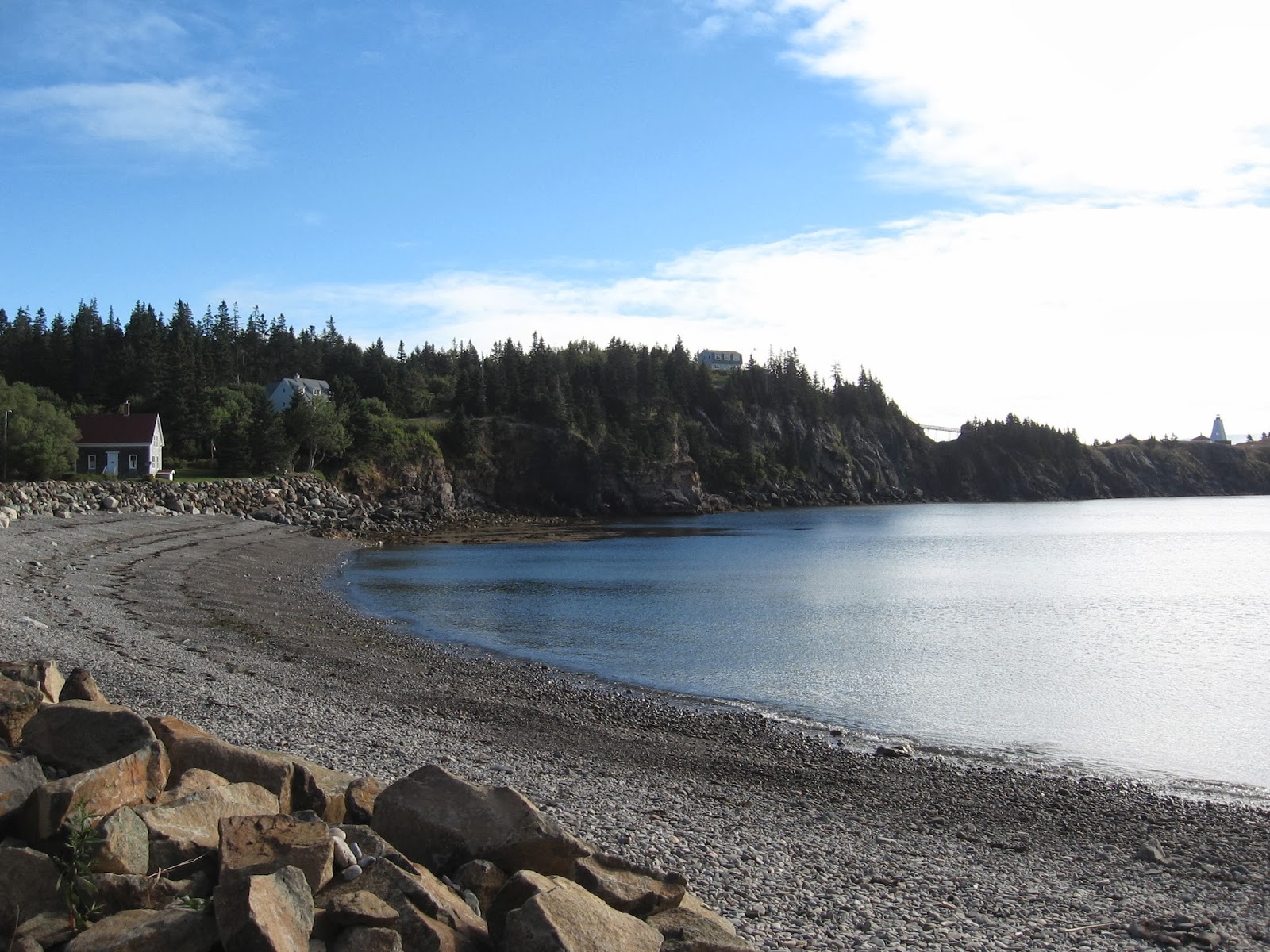 I have others which I may post if I haven't already done so. I will have to check. Any excuse to not think about our present weather.
And, I am glad to be back posting. I has been a while.