Oh my. I have already spent a good chunk of time out of my day, reading other blogs, which I enjoy so much, and I do lose track of time. I have some very interesting blogs on my list.

I was determined to write today, and now I find that I'm in a bit of a rush, to get it written, before setting off to do the items on my list today. I wonder if others make 'to do' lists. I make them all the time. That way, I can look back, and see all the things I didn't get accomplished, and then add them to the 'today' list.

I wanted to share with you our first snow. Yes, it finally arrived.....my bird friends are not impressed, Sadie refused to go out at first, but in the end could not put it off any longer, if you know what I mean. It took me 10 or more minutes to clean off the car yesterday, so I could get to church. 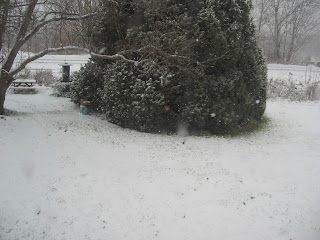 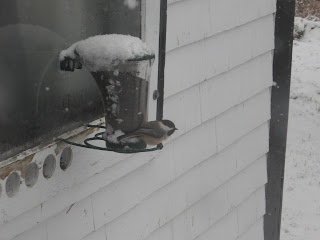 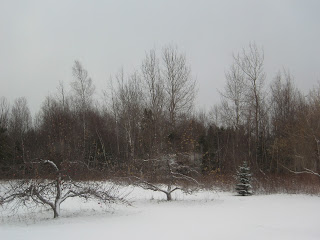 I have almost finished the decorations, some only require a string so they can be hung. I almost feel lost, now that they are finished, and it isn't even December. Now what will I do? Oh, wait, just look at the 'to do' list, uh huh.
﻿ 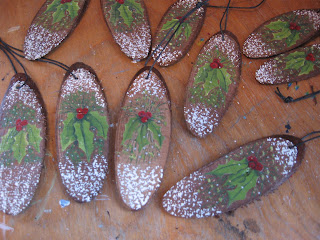 I had these wood 'slices' and decided to use them 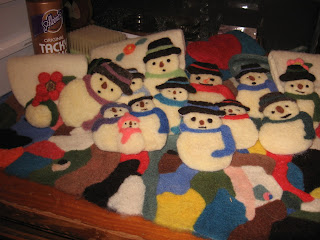 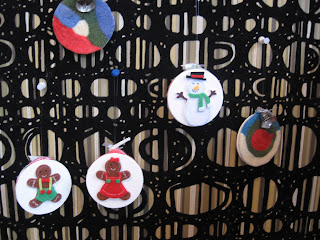 Felted on one side, painted and little gingerbread figures stuck on the other
I had felted just the circles, but wasn't pleased with them alone, so added the wooden circles 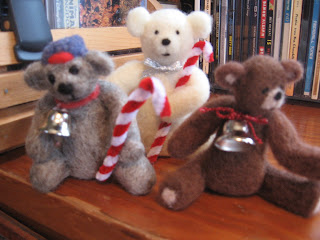 About Birds and Blossoms

The sun is shining today, with just a light cloud above. The days have been quite nice this week, and the temperature above  normal for this time of year. Last year, at this time, we had a heavy snowfall. You never know in Nova Scotia what the weather will be. It is a good time to get things tidied up in the orchard, and raspberry fields, before the snow flies.

I have just left the garden as is. It will be patient with me. It is not demanding. I do not move quite as easily in the cold, so I will just leave it.

I have been busy with painting and felting, getting ready for Christmas. I like to make little things for my friends in the Bible Study Group, and the Choir. If I have enough, I will give what is left to the little ones in church.

There is still lots of activity in my yard, around the feeders. The goldfinch are getting quite brave about coming to the window feeder. They will cling to the window frame, bottom or even side, waiting their turn. The ones on the feeder are a bit greedy, and chase the others away. Even the chickadees are coming to the window. It is the one feeder that the blue jays cannot land on. Squirrels are making a nuisance of themselves, and I am still catching hornets in the house. Weird.

My Christmas cactus began to bloom a few days ago. I am always surprised when it blooms, as I am not particularly a good caretaker where it is concerned. Perhaps it thrives on not getting water very often. I do not know what the trick is, but it blooms somehow. 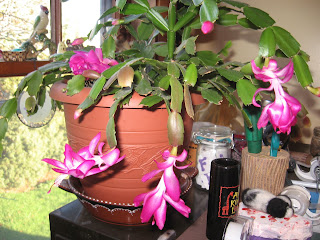 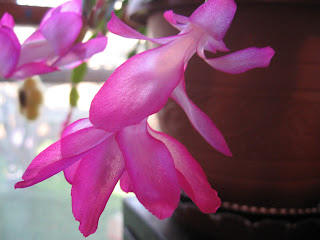 such a pretty colour 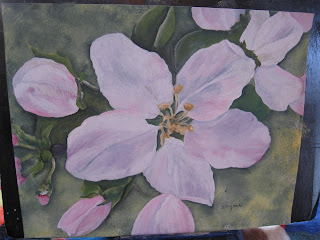 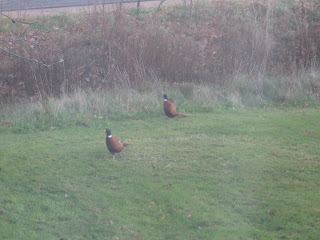 A visit to the yard by pheasants
There are several things coming up, things to attend during the Christmas season, along with more doctor appointments. I'm still taking drops for my eye, at least until the 19th of Dec. I am glad that I can keep busy, but the days go by so fast. I don't want to turn around or blink, or it will be Christmas day, and I am really not ready.
Last weekend was quite busy. I spent Saturday morning helping out at the church, tidying up the Choir room, Library and Resource room, as it was indoor clean up day. I did what I could. Then, Saturday afternoon, I went to a fundraiser Tea, for Lindsay's choir. The choir sang several pieces, and some individual children did separate performances. They served very tasty deserts.Then on Sunday evening I attended a Gospel Concert at a neighbouring church. It was a fundraiser as well.
That may not seem like much to some, but after the weekend, I am still very tired, and this weekend is about to start. Thankfully I do not have anything on but Church. I get so weary, especially if I go to more than one event a day. Sounds strange, but just the going is hard. ﻿
Posted by Bonnie at 2:56 PM 5 comments: 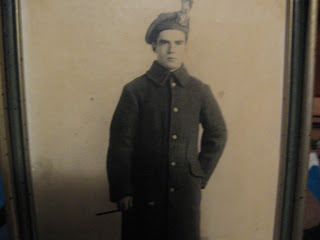 about not saying something..

that I really want to say. The words are right there on the tip of my tongue. Just four little words, that are bursting to be released.
#1 I
#2 told
#3 you
#4 so

Oh, how I want to say them out loud, within hearing distance of B.

I did mention the problem quite a while back, that if the bathroom ceiling was leaking, perhaps we should have someone take a look at the roof.
Answer: No, it's ok. I do it later.

Gradually, through rain storm after rain storm, my suggestion continued to be ignored.
Every time I collected the buckets to put under the drips, I said not so nice things in my head, but heavy sighs, and oh nos, and not agains, didn't seem to speed up the resolving of the situation.

I has been many months, perhaps years, (yes years) but finally, finally, after this last big rain, finally B had someone come and look at the roof.
I almost swallowed my tongue when I heard him say to the fellow, "It's pretty bad, so we need something done now...."
To myself....It wouldn't be this bad, if you had listened to me..."
That's when I wanted to shout it to the mountain tops ...... those four little words.... but I didn't, coward that I am.
Back in the spring we were talking to this same fellow, and I said to him that I would like to have him come and fix the roof, but, of course B said no.
It would take me a long time to explain about B. All decisions must be made by him, when he is ready. He isn't easy to live with, and since the stroke, it is worse..

Sometimes I feel, as my mother used to say, that I have the patience of Job.
You know what happens if you take a bottle of pop, and shake it up, then open it? It's sort of the same thing with B. I just never know when that 'pop' is going to fly all over the place.

Well, now that I have ranted a bit, I guess I won't worry about saying those four little words out loud, but I will know in my heart of hearts that those words are true.

I have been sitting here, questioning myself, and wondering if I should hit 'publish'.
The answer is yes, otherwise, there might be a pop explosion, and I'd have to clean up the mess.

Of wind, rain and ladybugs...

My, oh my, it is the 1st of November, already. There certainly is no holding time back. It passes like a breath of wind, and a month has gone.

Speaking of wind, we had a few days of good blows, and lots of rain, but not nearly the situation of the folks in New York, or, Toronto for that matter. I think we got away without too much effect of Sandy. She sure created a lot of havoc, and destruction. Though I really want to complain about my leaking bathroom ceiling, I can't allow myself more than a wimper, when I consider the fate of others.Those who know, say this size storm is due to warmer waters in the Atlantic, and other things that all aligned to make things worse. Global warming?

The days have been warmer than they should be this time of year, and there are lots of flies and lady bugs taking advantage of a few more days. The hornets are persisting in the basement. A good freeze is what they need, or, um....what I need. The flies, make so much noise as they batter themselves against the ceiling, or the window, and then, after a while, they lie, feet up on the window sill, or floor. I do not mind the ladybugs. They are special. (see below)

The weather eased off for the trick or treaters, last night. There was a bit of drizzle, but not the hard rain that fell earlier in the day.

I am not a great fan of hallowe'en, but I do enjoy the little ones who come to the door. Sadie, on the other hand, just can't quite get her little mind around these strange little creatures that arrive through the early evening, though she is pretty good, and doesn't bark. I had 11 young ones come to the door, 10 in the evening, and 1 in the afternoon when I was visited by the cutest little ladybug. Sadie actually took to this little sweetheart. I could not let this post go by without this picture. 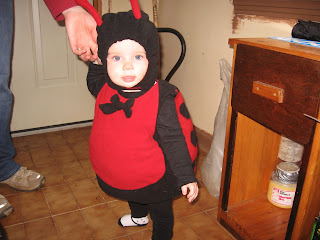 I was also entertained, in the evening by pirates, creatures of unknown origin, a witch, a devil, princess, flower child, and others. We never have a great many children up on the mountain, and last night was a dark, dreary night to be out on the road.
We are all finished in the orchard, except for a few trees that will be picked tomorrow.  Things are looking pretty bare, though the leaves seem to cling to the branches, unlike the other trees around. 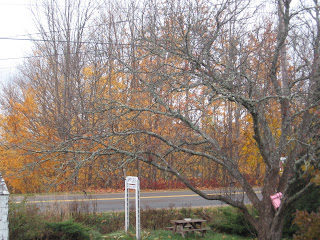 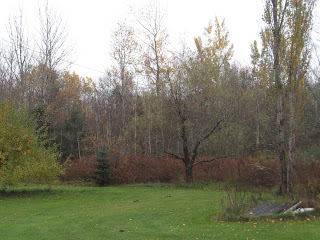