I know I said that I didn't want to post any more snow pictures, but here I am with just that intention. But I have a reason, beyond just showing snow.

I have been following a blog called The Fantastical Voyages of Flat Kathy, at https://flatkathy.wordpress.com/  where you can find out all about her travels. You will discover where she began and the interesting places she has been in South Africa, with her friend Reggie.

In the mail, yesterday, I received this beautiful postcard from Miss Kathy, and it made my day. Once again, it is the little things that give you joy. 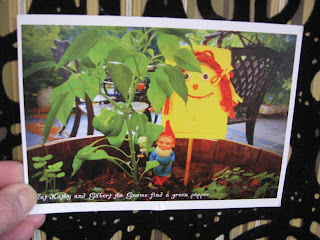 Flat Kathy with Gilbert the Gnome (who I secretly have a crush on)
Below is the scene outside my window this morning......﻿ 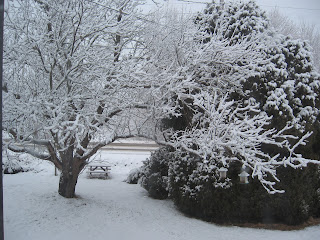 I know that I have been quite taken by the redpolls, and that I'm blown away by their presence here, let alone their numbers. I thought it would only happen once, but this morning it happened again.
I took some videos, with my little old Canon, and they aren't that great, but it is a record of what I was seeing.


As I wait for the videos to upload, (not sure they will), (they did!!!),there was another gathering, not as many, and they didn't stay as long.
And another, just now. Maybe it is the same birds, returning........
I have never experienced this before.......Amazing!
Posted by Bonnie at 10:21 AM 9 comments:

Amazing! Fantastic! I can't seem to find the words to describe what I was watching outside my window this morning.  There were at least a hundred birds, probably more, on my big tree, at my feeders, on the ground, and flying about.
They were redpolls along with some goldfinch, in the largest flock of birds I have ever seen. I knew that these birds flock together, from reading another blog, but I had never seen it until now. I have never seen redpolls until this winter, and that in itself was so wonderful.
I took some pictures, but I know they do not do justice to what I was watching, but I am going to post them anyhow so that I will have some sort of record of their visit. 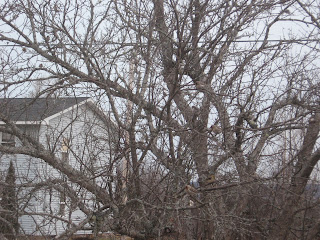 The tree was covered with the birds 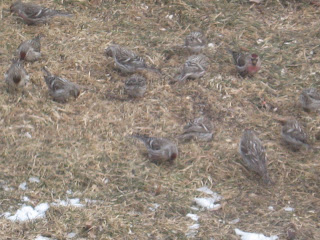 The ground was covered too 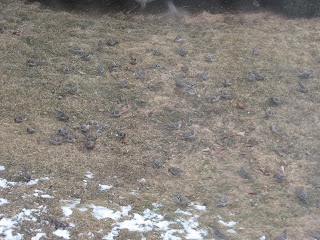 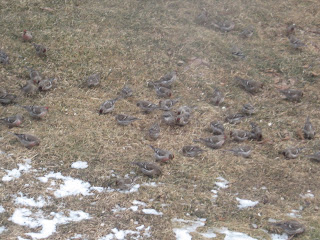 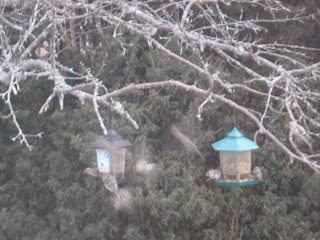 There was always action around the feeders, thus the blurryness 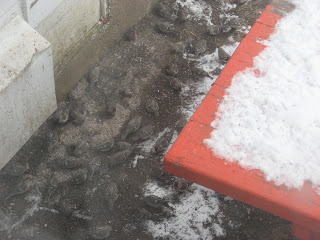 The ground under the window feeders was at times fully carpetted 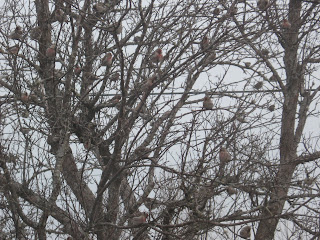 A better shot of the tree limbs
The morning light is quite dull, and I am not a very good photographer, but perhaps you can get some idea of what I was seeing. They have gone now, and the air is quiet. I could not capture the sound they were making, and wish I could have been standing right out in their midst. The pictures were taken through the window, and that doesn't help the clarity.
I am thrilled that I had this opportunity, and see an amazing sight. God's creatures, doing what they do best, being, just being who they were meant to be.
Wish it was as easy for us humans.
Have a good day. We are expecting a, dare I say it, snow storm tonight. Oh well.........﻿
Posted by Bonnie at 8:58 AM 7 comments:

There is not much going on today, but I decided to write anyway. As I write, a nice gentleman is tuning my big old piano, so I am listening to the tapping of keys, as he makes his way up the piano notes. It has been a while since the piano has been tuned, but so far, I haven't heard any under-the-breath nasty words. Looking good, or I should say, sounding good.

The sun is actually shining today, after a rainy yesterday. The rain washed most of the snow away around the house, leaving in its wake, puddles and mud. I think there is a peculiar odour to mud. Perhaps today's sun will dry it up a bit. Next week will bring with it the first day of spring, however with snow forecast for the weekend, I am not holding out much hope of a real start to spring on that particular date, but maybe I will be pleasantly surprised. Warmer and dryer weather would mean that I could start cleaning up around the place. There are shingles from the out-building that have blown off through the winter, and are now scattered about.

Yesterday was another good Wednesday. Just us gals, my two daughters and my two granddaughters went out to lunch and spent the afternoon together. So nice. I love being with my girls. Sometimes, I just sit back and listen to them and watch them, and love them to pieces. Is it ok to be proud of my girls? What a silly question. Of course it is!


An old picture, but I do not want to post any snow pictures, :)
or mud puddle picture for that matter.
Have a good day.
Posted by Bonnie at 11:04 AM 6 comments:

I was sitting, thinking, and feeling pretty good, because I had just balanced my cheque book.

I was so happy, it was so easy today, and I thought how strange it was that I could feel so good about balancing a cheque book.

Then the thoughts flowed, and I thought about how people sometimes are looking for the end of the rainbow, the big prize, the fullfillment of dreams, the pot of gold.

Now, me, I just need to be satisfied with enjoying the rainbow itself, with its beautiful colours, blending overhead. To be satisfied with the moment, even in the rain, rejoicing in the fact that I just balanced my bank account without any stress.

Strange isn't it, what little things can give a person joy.

So many things are bothersome in my fibro, depression filled life, that sometimes it is an effort to find a reason to rejoice, and then I have moments like I just had, thoughts that pull me up short, and help me to realize that there are lots of joy-filled moments. I just have to recognize them. 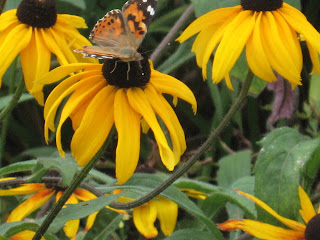 May you find the simple joys in life.

that my first grandchild is now 16. It doesn't seem possible that 16 years have passed by since she was born. What an exciting time that was, and spending the time in the delivery room with my first daughter, waiting...waiting...then all of a sudden there was this most beautiful baby girl, and grammy had the privilege of cutting the cord. As hard as it was to watch Dawn go through the labour pains, (I think I held my breath each time she had contractions), it was such a joy to be there. And now that beautiful baby is a beautiful teen, inside and out. She is a treasure. 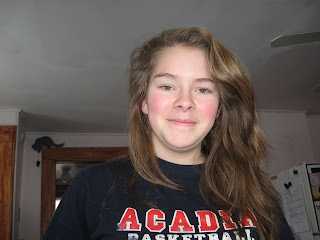 She wasn't too pleased that I wanted to take her picture that day.
Lindsay, finally was able to take off her wrist guard, after falling on the ice and breaking her wrist. She is supposed to baby it, until the strength returns. Here's hoping. She's my other sweetheart, and you never know what she is going to do, or say.
I am feeling better this week, thank heaven. The heaviness has lifted and I feel a bit more human. Last week was a lost cause.
I have taken some pictures of the birds. They are not the best shots, but I did manage to get a few of the redpolls. 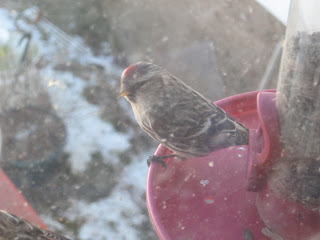 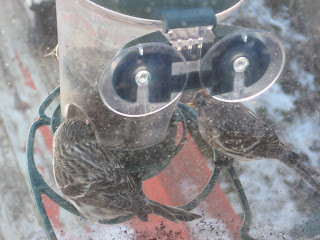 Below is my view from my window of the tree out front.
Sometimes it is full of the different kinds of birds that come to the feeders.
As I have said before, I love watching them. 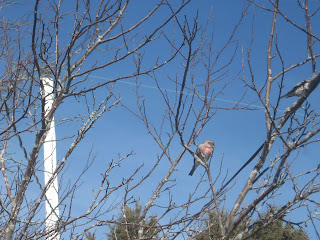 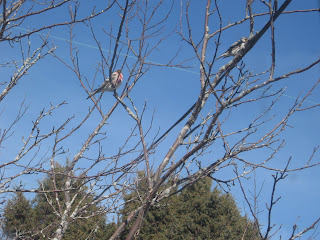 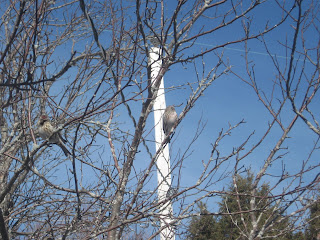 Our weather today is wet and dreary, and where there is bare ground in and around the driveway, there are puddles or running water. The grass is spongy and Sadie doesn't like the feeling. It is funny to watch herr test the wettness of the ground, before going off the last step. It is sort of like a person testing the temperature of the pool with their toes, before making the plunge.
Well, I should plunge into this day. Things to do, think about, read, wash, shine etc. etc. etc. I tend to do more thinking than anything else.....sometimes that's a good thing, sometimes not.
﻿
﻿
Posted by Bonnie at 9:50 AM 2 comments: