More about Aslan (of course)

Sunday morning and it is raining out. It looks cold, but I haven't been out yet.....later I will make my way to church. We might get a bit of snow later today, but I will believe it when I see it.

I have managed to send my Christmas card to the printers. The printers I have used for the last several years has closed, so I am using a new one. My neighbour works there, so it was a natural choice. I haven't gotten them back yet.

I have also been painting some Christmas decorations. I bought some ceramics to paint. One set is snow babies, but Dawn said they look like Teletubbies, and now I can't get that picture out of my mind. They are not finished yet, but hopefully they won't look like the tv characters when they are done.

My dear little Aslan has been more active in this last week, though he still makes the upstairs his go-to place. He has not stepped in my wet paint yet, though it has been close a few times. I quickly get my pallet off the desk when he jumps up to inspect what I am doing. I have not been so quick with the laptop, and he has managed to make things pop up that I have never seen before. Yesterday he managed to make everything elongate horizontally, but after some playing around with various settings I managed to get it back to normal. Right now he is somewhere in the basement hiding. I put the dryer on and the noise frightened him.

Heather came to visit yesterday, and Aslan, seeing her, ran and hid. Of course. After a while, I coaxed him out and brought him down to see Heather. After a bit, he settled and then enjoyed lots of love from his 'first mum'. 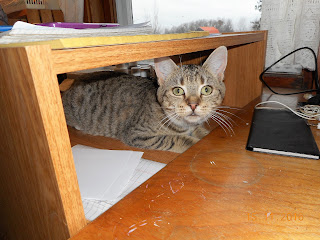 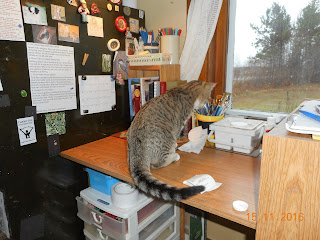 My brushes are interesting it seems 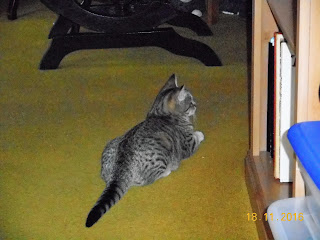 Checking out the kitchen, and watching the Captain, who he
is still not sure of. 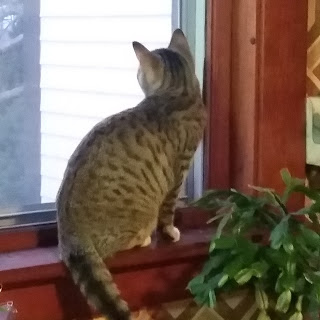 His perch in the kitchen window, watching birds 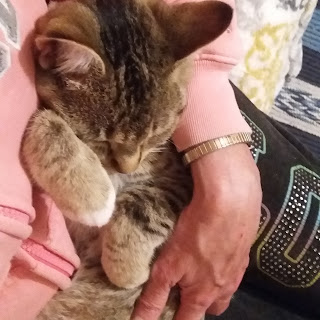 Monday
Well, I had better figure out how to get some energy this week. Next week looks to be a busy one. One night I am off to a local Home to help out with carol singing, and then Thursday and Friday, off to the school to help out with a children's Christmas shopping party, that is, if it is still on. The teachers have gone on a work to rule and extra curricular activities are cancelled as of Monday. I'm not sure if the shopping party will fall into that category. I suppose this is better than a strike. At least the teachers will still be teaching. They have been without a contract for at least a year.
Aslan has an appointment with the vet, and has to be there at 7:30 Wednesday am. And then there is the Bible Study Monday and Choir Thursday, plus a music lesson. This lethargy or tiredness or whatever it is had better take a hike, or at least limp away. I have things to do.......and I haven't started Christmas Cards though I have them back from the printers, and I still have ornaments to paint. Before I know it it will be the middle of December and I still won't have things done. Oh, and there is trying to decide what to get for my girls, etc. Wish me luck.

6635
+......sort of. He is still making the upstairs his home, but he has decided that I am not as fearful a [[[[[[[[[[[[[[[[[[[[[[[[[[[[[[.person as I was in the beginning, besides, I am bringing him his food.....
He is willing to let me pick him up, and then when he is on my lap he purrs and prods and rolls over, liking very much a back pet, ear scratch and tummy rub, all the while singing quite intensely.
It will be two weeks tomorrow, since he arrived, and though he won't venture downstairs yet I think he has made great progress. I am trying not to be impatient and let him decide the time to be brave. I did carry him down yesterday which he allowed though I could tell he was very nervous, and soon decided he wanted to get back to the safety of upstairs. 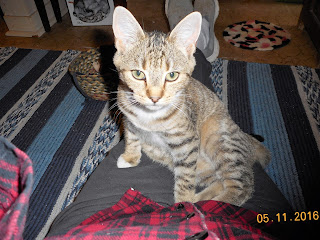 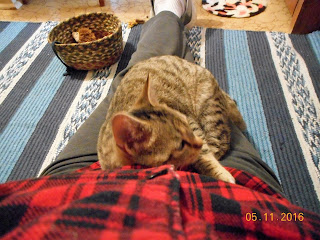 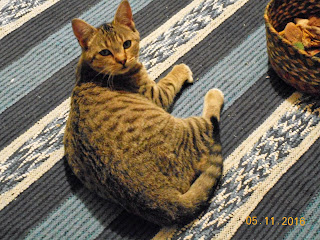 Wednesday.....five days since the above writing. Aslan has come a long way. He has now visited the main floor several times and last evening we had quite a little tour. The Captain was off to darts, and Aslan and I walked the living room and kitchen and then he and I took a little tour of the basement. He checked out all the little places and disappeared for a bit, so I called him and he ran right upstairs to me. He is now eating in the kitchen and actually came downstairs this morning without being coaxed, to have his breakfast. He still is very timid when he sees the Captain, which is why last night was a good time to have Aslan check things out. 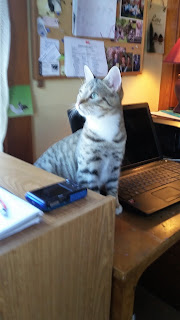 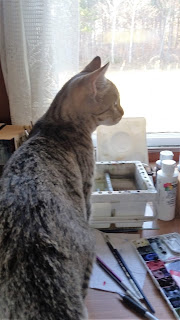 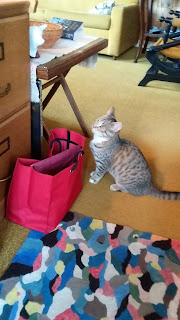 Aslan likes to be on my lap, and purrs as he flips from one position to another. He likes head scratches and chin rubs and to be held close. Oh he is a joy, and I am thankful that I decided that it was time for a new friend. He definitely needs a scratch post, since my legs will not hold out much longer. :)
As I write this he just appeared and is now sitting on my desk, watching what I am doing with the keyboard.

I was going to erase all the numbers and weird things you might see in this post, but I will leave it, as it is Aslan's message to you.

The Taming of the Kitten

Tuesday:
This is the beginning of the 4th day, and I feel I have made progress with little Aslan. I know where he is, and when I look at him he doesn't skitter away. He took treats from me this morning. He is doing rather well on his own, eating and using the litter, which is a good thing for sure. He looks at me, and I can see that he is just not ready to trust me. Time, it will take time.
He let me give him a little scratch on his head this afternoon, without backing away. Sound the trumpets....Dah dah!

Wednesday am : Success via a tweet from @1catshepherd where a cat meowed. I went upstairs and sat on the floor and played the tweet and quick as a wink, Aslan was out. I had put the food dish in the middle of the floor and he started to eat. Then he came over and let me pet him, as he investigated this human sitting on the floor blithering away at him. He purred so loud and kneaded. I don't need to tell you how thrilled I was at this progress. He stayed out for about a half hour while I was seated. 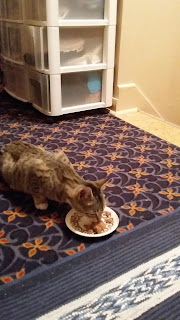 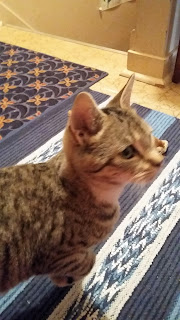 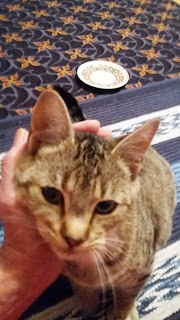 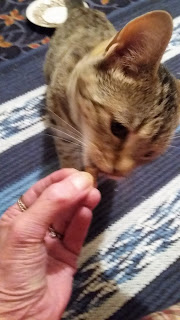 He took a treat from me hand several times 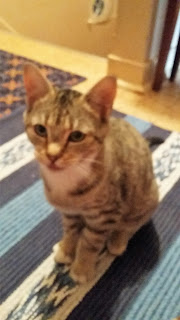 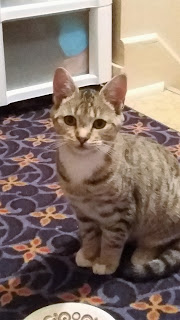 All was well until I stood up. He watched me while I swept up loose litter that he had managed to get all over the floor by his box, but then, when I moved toward him, he headed back to his hidey hole.
More progress is needed before he really feels comfortable, but it's a wonderful start to his 5th day.