It is a beautiful day on the mountain. As I gaze out the window, it is such a delight to see things so clearly, and I give thanks.

The cataract surgery was quite successful, and everything looked good at the one week check up, so I am smiling, and hoping that the healing will continue as it should. My doctor wants the healing to go slowly, and so I find myself on a different regimen for the drops. It will take me at least 4 weeks longer than normal, but at least it isn't two months longer. I do not need glasses for distance, (so long bifocals), but I am using reading glasses for close up things. I can handle that, except I find that I am always looking for them. I put them around my neck this morning. Anyhow, I am very pleased with how well I can see, and am praying for a good healing experience.

I just want to thank folks for their good wishes. I really appreciate them.

The first day of summer comes tomorrow. I am looking forward to enjoying the sun and the warmth.
I will even enjoy the rain, now that my roof is fixed. I shall no longer be singing, 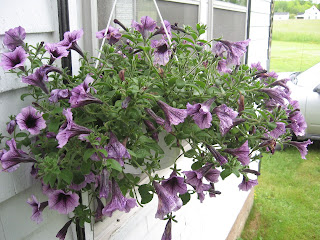 Have a wonderful day, and enjoy the sunshine!
May it be shining as bright in your world
As it is in mine.
Posted by Bonnie at 10:27 AM 7 comments:

Finally, today, roofers arrived to put new roofing on the back of the house, you know the spot, the place where the water came in and dripped into my bathroom,  It is not finished yet, but I am hoping that when it is done, I won't have to wear a raincoat to the bathroom any more. (That might be just a bit of an exaggeration.)

I thought I would share a few pictures. You will probably think me a bit 'tetched', but I thought it would be cute to put some teddybears in the garden. Perhaps I missed something in my childhood, and am just catching up, or not. 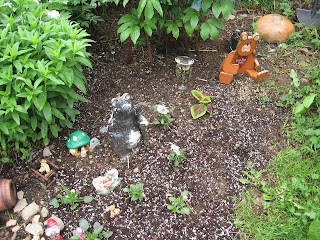 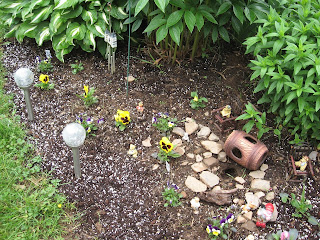 A little chipmunk has a hole here. He looks so cute when he pops his head up. 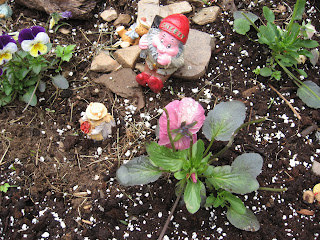 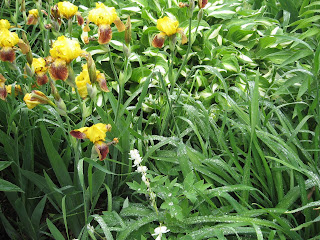 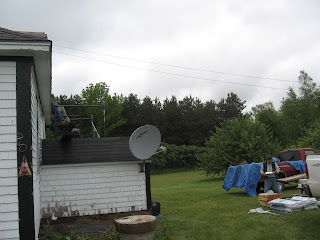 Proof, so I'll know I wasn't dreaming it. Roofers at work
In the morning, I'll be off to the hospital,
Where a surgeon will be waiting for me,
And when the dear doctor is finished
It will be the end of cataract surgery for me.
Hooray!
Posted by Bonnie at 7:32 PM 4 comments:

How High's the Water Momma?

Well, the latest post tropical storm has just passed through my part of Nova Scotia, and it has rained pretty hard. I didn't think the wind was too bad, though it might have been in other parts, that were harder hit. The sky is still heavily overcast, but there is a bit of a brightness, that tells me that the worst is over.
Here is a picture that Dawn took yesterday morning. I noticed the strange, yet beautiful clouds too, but wasn't prepared to go out in my jammies to get a picture, and didn't want to take it through the window. 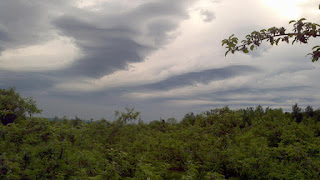 Here is a shot of some of our raspberries, being worked on by Kayley, who is far in the distance. 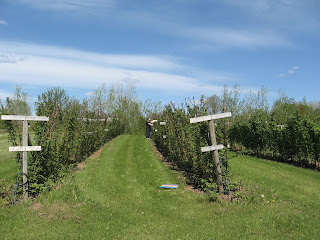 It's amazing how many blues there are in a sky.
Every day is different.
The clouds never look the same.
Heavy rain means showers in the bathroom
As once again I set out the pots.
Filled a litre ice cream container,
I would say that's lots.
Buckets here and towels there,
Until the raindrops stop.
Then empty the pots,
pick up the towels,
And grab the big ol' mop.
Rain......... nature's was of forcing me to practice patience.
I'm learning.....
I'm trying........
I'm tired of trying...
Posted by Bonnie at 5:16 PM 5 comments:

It is time for another post, if I don't melt away before I am done. Since I did so much belly-aching about the cold, I dare not complain about the weather we have had this weekend, but I will just say that it has been hot, hot, hot! Did I mention that it has been sweltering hot? I am not complaining, but rather giving a true description of the weather in the valley. It has been a great weekend for the Apple Blossom Festival, so that's a plus. It is going to cool down as the week moves along, and rain is expected. After being baked, the gardens will be refreshed.

The blossoms didn't last long on the trees. The wind took care of them. It would be nice if they lasted a bit longer, just because they are so pretty. 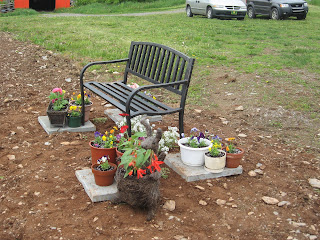 The beginning of Dawn's dream garden.
Naturally a bench is needed after the weeding.
(which I volunteered to do) 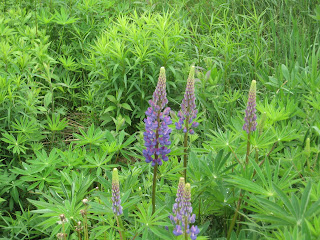 I noticed my first Lupens flowering.
Soon the ditch will be full of them. 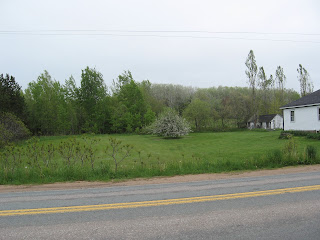 I usually take a shot of the barn from the house,
but this is a shot of the house from the barn.
..................................................................................
I took a trip down memory lane on Friday, when I delivered Lindsay to Girl Guide Camp. When my daughters were young, they were involved in Guides, and so was I. I stayed longer than they did. When I think about it now, I don't know how I did it. That happens quite often when I look back on things. I was probably a leader for 10 or 11 years. We had such great fun at this camp. It's a little ways back in the woods, and in those days we had the old ridge tents, a big boiler fire for dishes, and this lodge in the picture below was where we cooked on rainy days, ate, and did crafts, and had fun.
I remember one night, there was going to be an eclipse of the moon, and most girls wanted to stay up and watch it. That was the way it started, but gradually the watchers thinned out, until there was just one girl left, and me. That was a very short night. We would usually go for a week, and Dawn, another guide and myself always seemed to spend our birthdays there.
Campfires were always a fun time too with guitar, singing and skits. It was just a wonderful time.
Lindsay is a 3rd generation camper at this guide camp, and taking her there brought all these thoughts.
I am sad to say, that the camp area is not as nice as it was way back then, although, trees were cut to allow for a view of the lake. There were always loons on the water, and it was so neat to listen to their calls.
The other thing that made me sad, was the logging that has been going on along the road into the camp. It looks so ugly.
﻿ 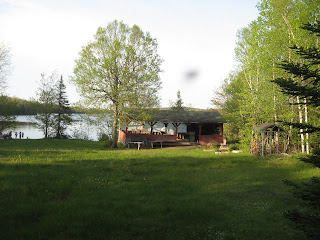 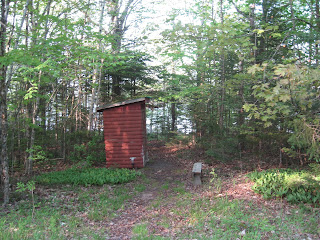 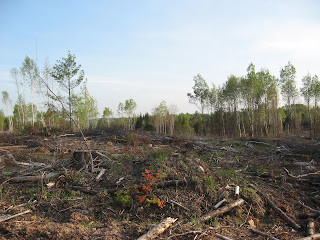 This is just one area. It looked like this most of the way in.
I guess times change, but that doesn't mean I have to like it.
Well, all this walking down memory lane has tired me out,
so I'll say,
so long
for now.
Day is done, gone the sun,
From the lakes, from the hills, from the sky.
All is well, safely rest,
God is nigh.
Posted by Bonnie at 8:20 PM 8 comments: