I suppose it's to be expected. The weather has been very changeable, with snow, then rain, and back to snow. I am just glad that I don't live in Buffalo, where they have been hit with a great pile of snow.

Last weekend I took some pictures of the snow, and it has taken me this long to settle down to write. 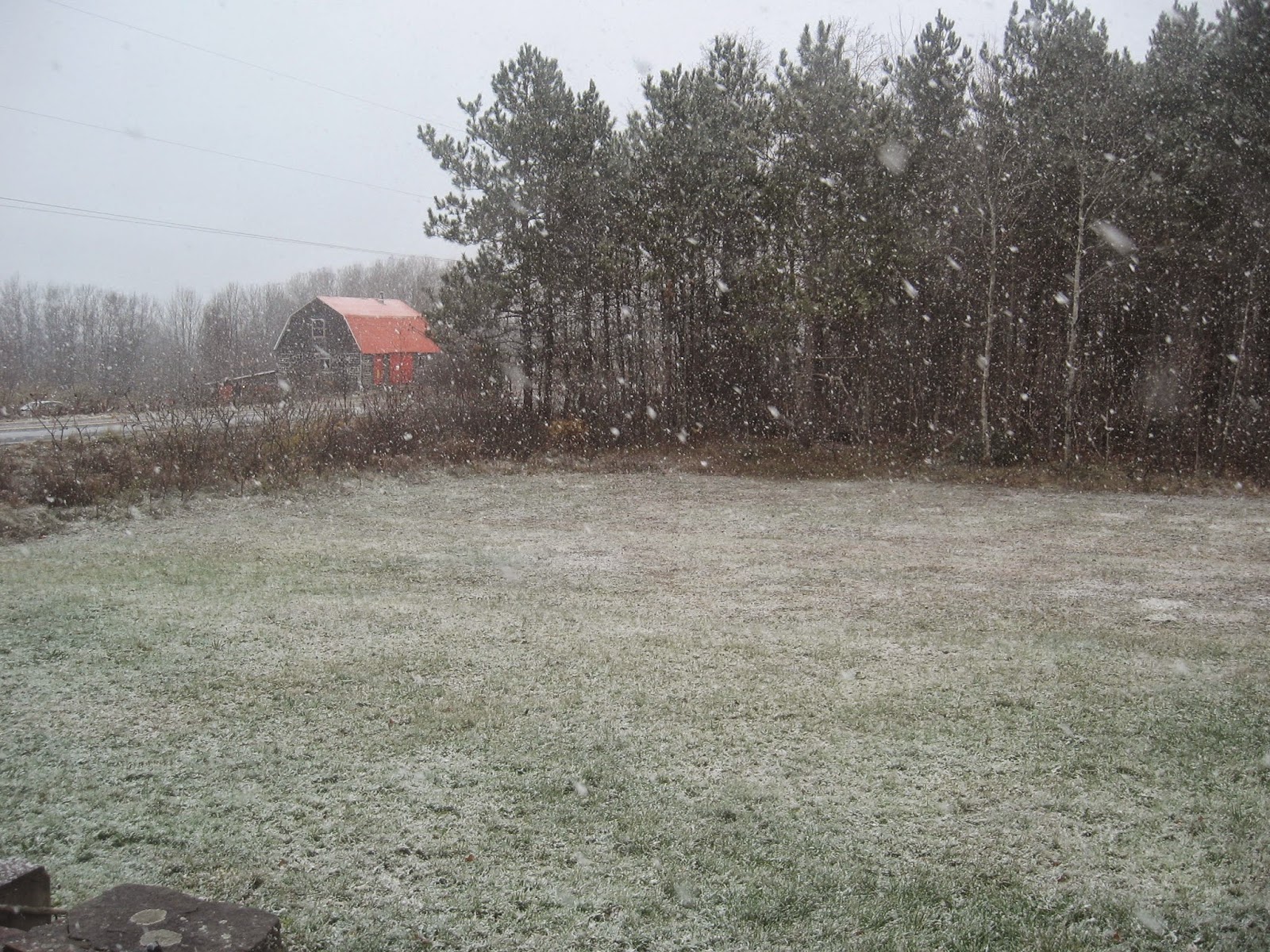 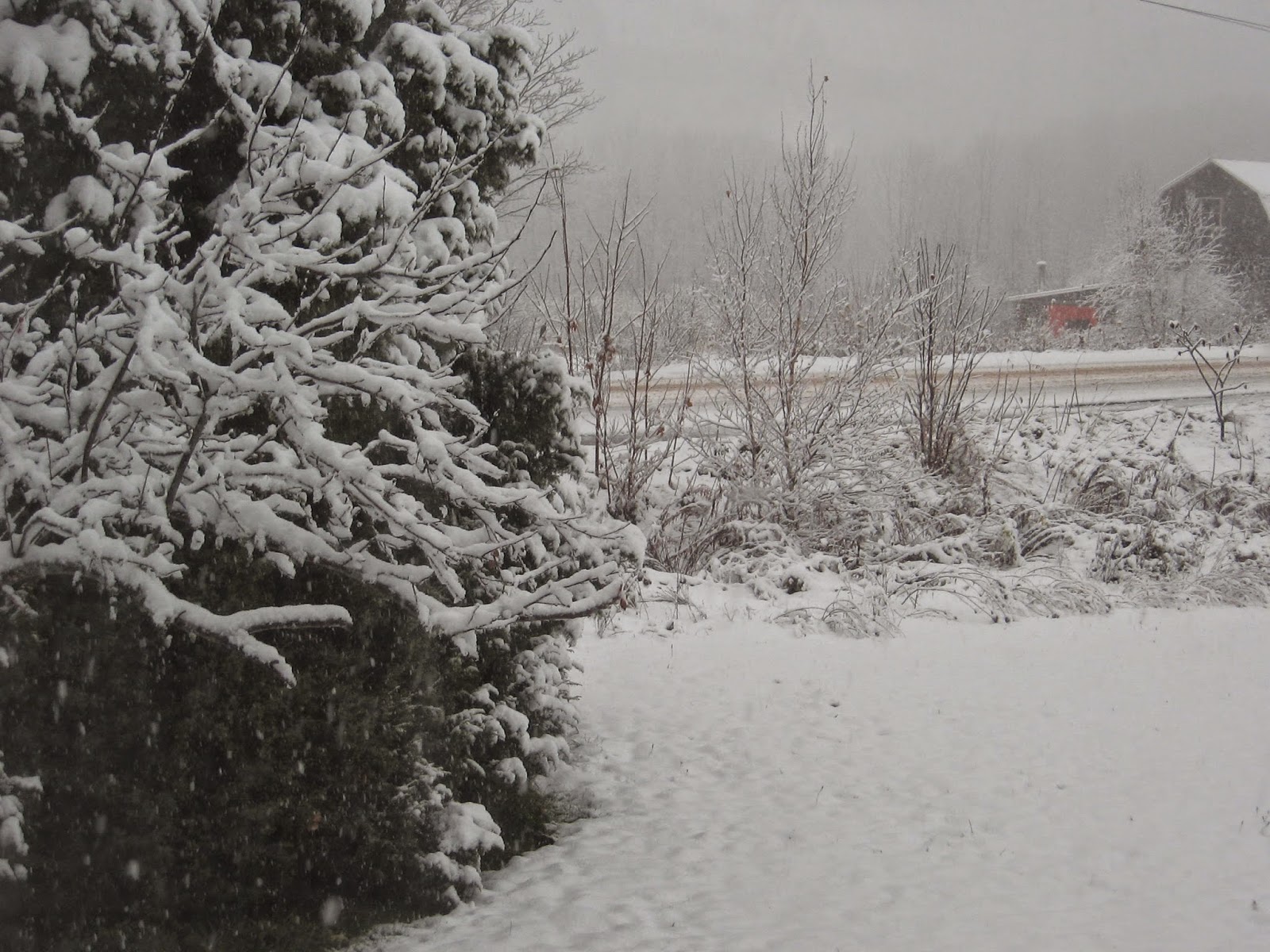 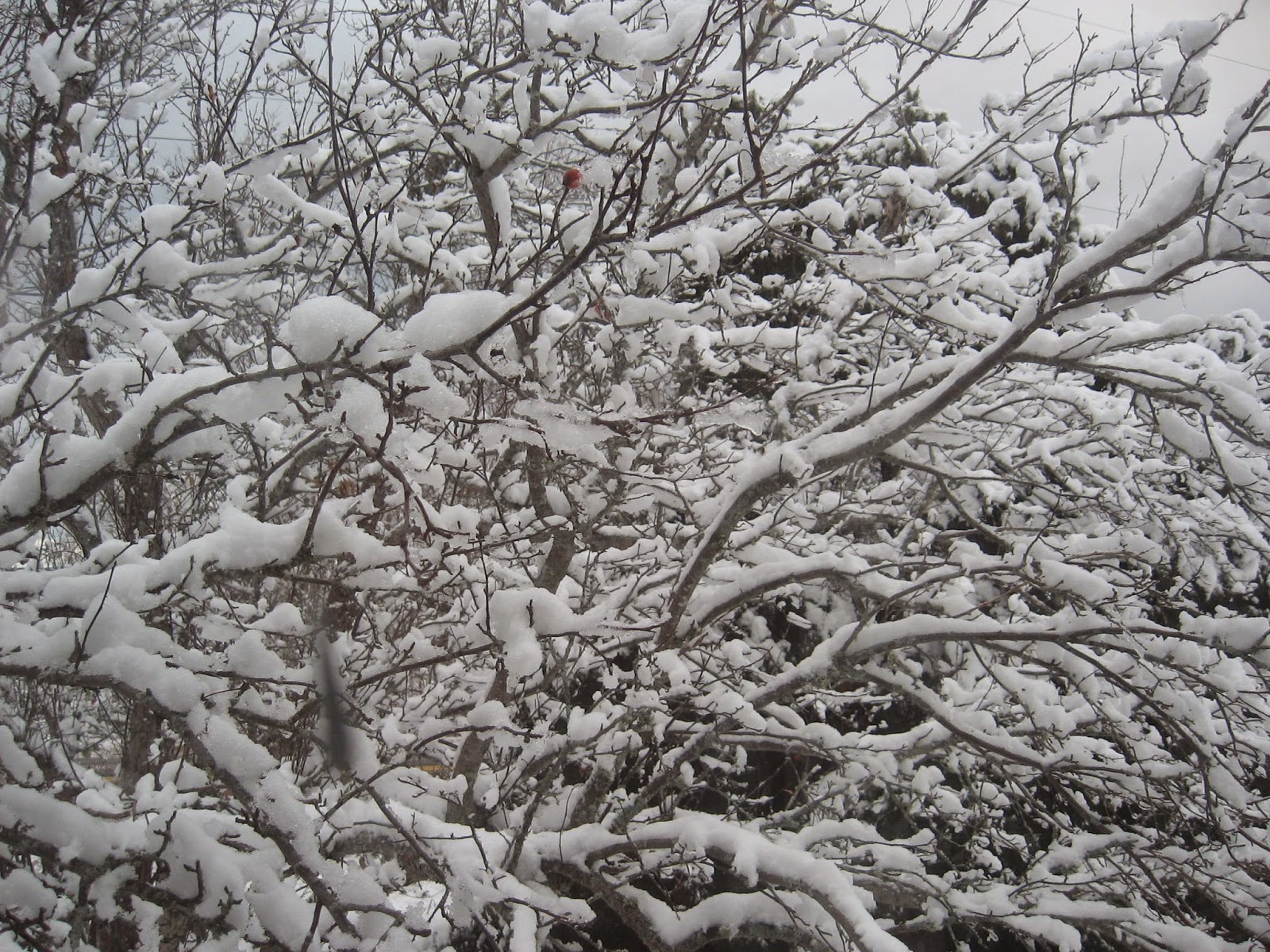 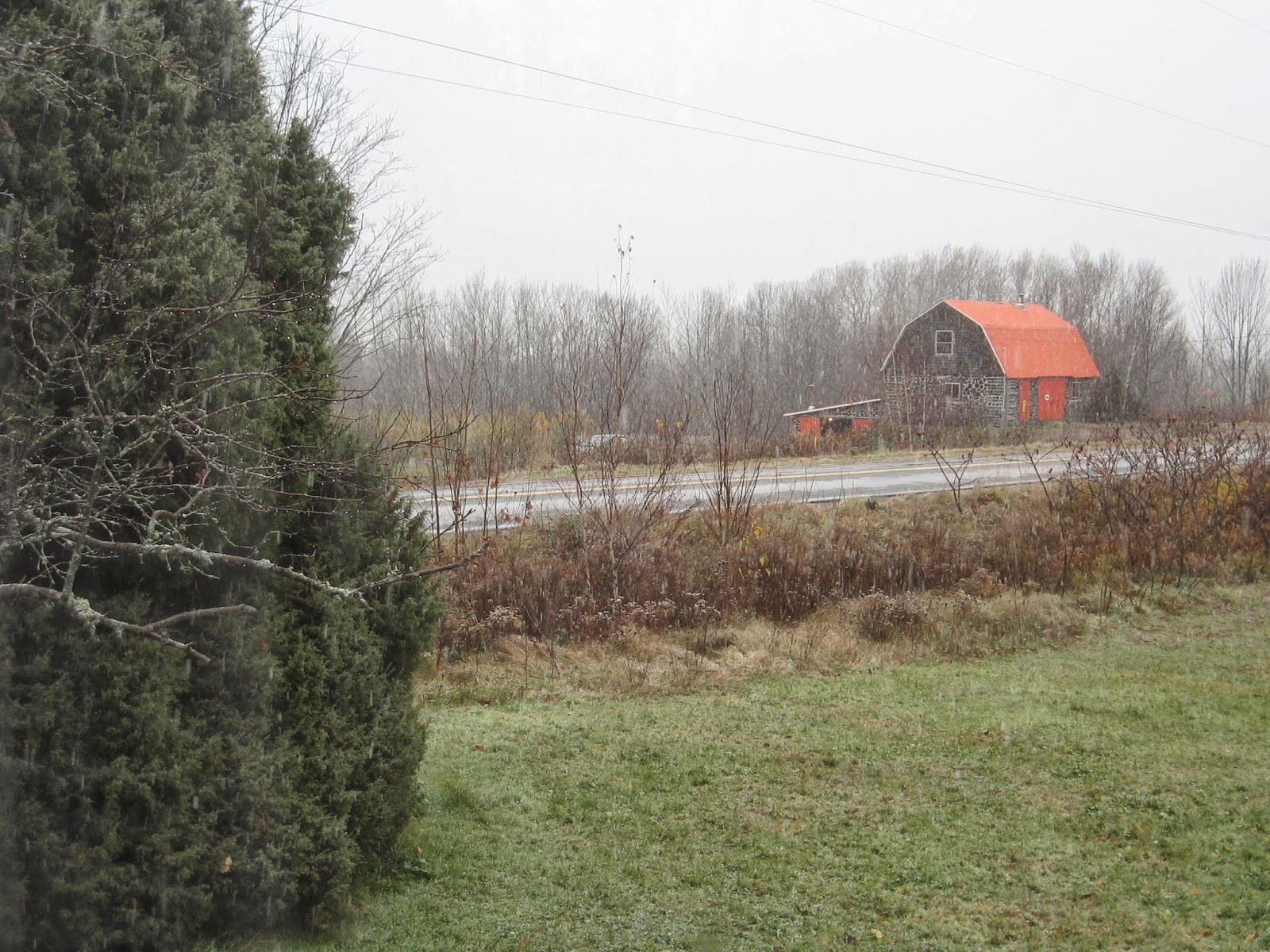 This should have been the first picture, taken just
as the snow was beginning, and then the above 3
came in order.

Sadie is still hanging in. She sleeps quite a bit now, and has become very talented in spitting out one of her pills. Her tongue does all manner of twists and turns, as she works to get rid of this little white half sphere of medicine. We have not been sleeping well at night, because she finds it necessary to relieve herself in the wee small hours. If she makes it until 5:30 am, I stay up, since there is not a hope I will be able to go back to sleep. Yesterday and the day before she slept till 8, but had been up at least twice through the nights.

I am doing a little felting still, but have pretty well finished all I wanted to accomplish. I really need to begin thinking about Christmas shopping, though I don't buy a lot. Christmas music for the choir has all been planned, and that is a good thing, as there are a few Christmas events coming up that I will be helping out with, and along with other 'to do' things, I did not need to be concerned every week about what the choir would sing.

My cards have not come from the printers, but I am hoping to get them early next week, then the addressing and writing can begin.

There are certainly lots of things that need doing, so I am hoping my energy doesn't give out on me. I am finding that small afternoon naps have been a necessity lately.

Yesterday, I felt I had sufficient get up and go to run a few errands.....well, it started out that way. I decided that I would take the Captain's empties to the recyclers so I loaded 4 cases of 24 bottles into the car, and headed for the recycle place. Upon opening the trunk of the van, a rushing waterfall of green bottles came roaring out of the car and onto the ground, smashing and crashing, before I could get the door closed. Oh my! I thought I would cry...but I didn't, though I did stand there for a few minutes....looking at the mess on the ground, and wondering why I just hadn't stayed home. Anyhow, I asked the folks inside for a broom and dustpan, and proceeded to sweep and pick up the broken glass. What a mess! I thought I could be part of an old Carol Burnett comedy sketch. The story of my life. As it turned out, one of the boxes had fallen on its side and 18 of the 24 had fallen out, only 6 of which survived the plunge. I meekly returned the broom and dust pan inside, having put the broken glass in a coffee can that just happened to be in the back of the car. The gal inside gave me a hand bringing in the other boxes. When I came out, I just sat in the car, feeling like a truck had run over me. Did I feel able to carry on to the Library, store and favourite coffee shop? I turned the key, and backed out, heading directly home. I had had enough, and it was time for one of those afternoon naps!

I've been busy for the last little while felting Christmas items.
I know, some people don't want to think about it yet,
but when you want to make things,
you have to think a little bit ahead.
It is preferable to watching the rain fall and hearing the wind blow.
I just go into my little world, and shut out the rest.
Sometimes, it is the only way to get through the day. 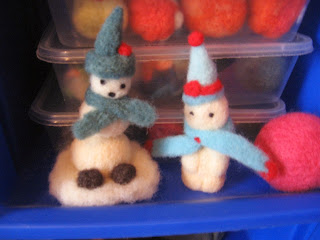 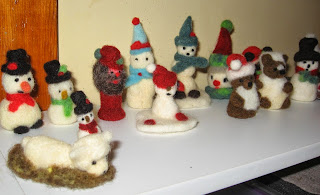 The little snowman behind the lamb is about an inch
and a half high. 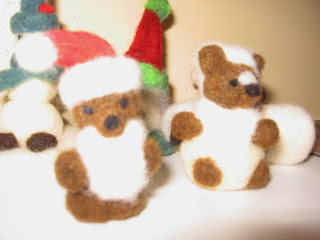 Sometimes I get carried away with my sillyness.
The little bear on the right 'just rolled down a snow covered hill
(in my mind of course) 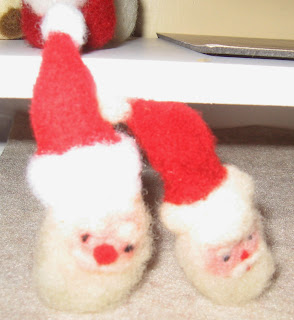 I also finished the paintings for the Children's Wish silent auction. I haven't heard how they made out, but I hope they made a substantial amount. They do such marvellous things. 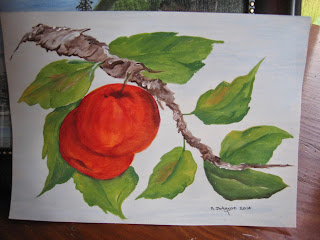 You can see that I am not a very good photographer, or I would have realized that my camera was reflected in the picture below. It is a painting of a shoreline close to us on the Bay of Fundy, Victoria Beach, though there really isn't a 'beach', but more rocky shore. 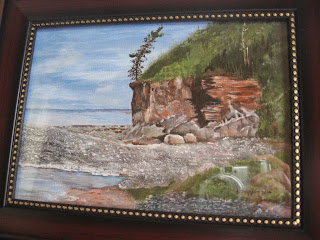