I'm sitting here, using my laptop, and gazing out the den window at the barn. The sun is shining on the front of the barn across the road, whispering that Spring has arrived. Yes Spring is here, and with it will come a snow storm, forecast to hit us tomorrow. Spring in Nova Scotia. I know the warming temperatures and the bare ground was just meant to lull us into thinking that the snow had left for another year. Well, we shall see what we shall see.
I am glad to have my laptop back, though there were still a little bugs I had to work out when I got it home, but things are better now.
We had a time change here, and it is now light later in the day. We lost an hour last weekend, and I am still trying to find it. :)
This past Monday marked the anniversary of Sadie's death. I found it hard and thought about her a lot. It is hard to believe that she has been gone a year, though I don't hear her little nails clipping on the floor as much as I did, but every time we have chicken I think of her. My didn't she love chicken.
I have not considered having another pet......

I see that I started this on the 20th, and it is now the 22nd. What was bare ground is definitely white now, and the wind is cold and blowing hard. However, if I just look at the sky it is quite blue, and beautiful. Two robins just flew into my view. I can't think that they are too impressed with it all. 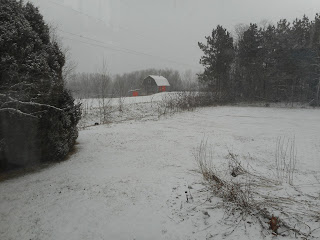 Yesterday, when the storm began 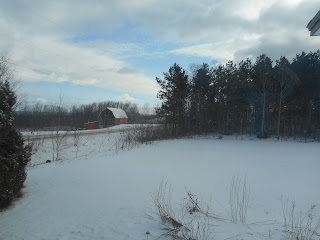 and today, or earlier this morning. Not too much snow,
but it is cold. 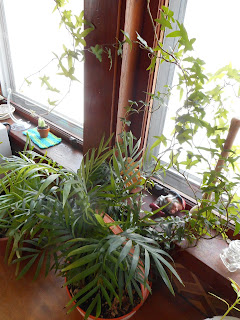 I wanted to put this picture in because it is of the plant
a friend gave me when Sadie died. She said, 'I hope it lasts a while',
and here it is a year later. The vine has really grown, and I have one
of the plants rooted in water, which I hope to get potted soon.
It's a living reminder of my little girl. 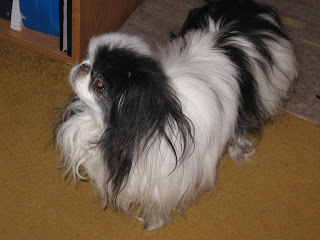 Well I must say that I am experiencing something different  as I write this. I am trying to post this from my phone (which I just  purchased a week  ago ) I takes some getting used to, that's for sure. I have made quite a few errors but am gradually making headway.
Unfortunately I managed to give my dear little laptop a drink of coffee early one morning more than a few months ago, and since then the keyboard has been slowly dying. I am waiting for a new one now...thus my attempt using the phone.
It is nice to have this as a backup but is not as easy as the laptop.
I just stopped by to say hello and to say that I am trying to keep up with my blog reading.
I am off to make my own version of scones.
Have a good day..... I shall return when my new keyboard arrives
Posted by Bonnie at 1:54 PM 6 comments: