Well, I must tell you of my adventure last evening.......

I had picked up granddaughter L from her after school Drum Line practice, and we were chatting about school and playing the drum and classes, just regular stuff. As we passed my house, L said "Grammy there was a hawk by your porch."   I hadn't looked so didn't see what she saw, but couldn't believe that there was a hawk just sitting by my porch. L said it looked like a lawn ornament.

After dropping L off, and returning home, sure enough, there was a Hawk by my porch. I approached it carefully, knowing that it must be injured. That would be the only reason that a wild bird like that would just be sitting there. I walked right up to it, within a foot and it watched me, but didn't move.

"Camera," said the little voice in my head, so I went in, put my purse down, grabbed my camera and went out. The Captain had gone out to have a look not believing at first, what I told him. I took my pictures before the Captain went out,

Now, there is a guardian angel of wild life here in Nova Scotia. Hope Swinimer is the founder of a wildlife facility, where they rescue injured wildlife, give medical attention, and rehabilitation to injured or orphaned animals, with the hope of releasing them back to the wild. This special place is called Hope for Wildlife, and is in Seaforth, near Halifax, quite a ways from where I live, almost two hours away. (www.hopeforwildlife.net )

Really concerned for this beautiful bird of prey, I called Hope for Wildlife, and talked to Hope. I told her about the bird, and described it's action, as it had now started to hop across the yard, dragging one wing. I think we had made it nervous with all the door openings. Hope thought that it should be brought in to get the help it needed, and while she would try to get a person to come the distance to pick up the bird, she suggested if I could, to see if I could get it into a box, to contain it until someone arrived. I took a blanket (not a heavy one, just the handiest one) and a big box and went out to secure the bird. It was frightened and did not realize that I wanted to help, and it went into the bushes at the back of the property, finally coming to rest on the branch of a fallen tree. Again I was within a foot of it, talking to it as though I could make it understand that all I wanted to do was help. Its beautiful eyes seemed to be filled with fear, its beak open as though it was panting. I wanted to cry. It was so beautiful and so badly injured, a badly broken wing. My first try at covering it with a blanket in order to capture it, went awry, and it got caught up in blackberry branches. Having it partly covered with the blanket, and being the complete novice that I am, I thought I could just move it into the box that I had laying on its side as best as I could in the brambles. I am not sure now whether it was the beak or a claw that caught my finger through the blanket. Ouch! That hurt. The poor hawk was really frightened now, so I thought I had better leave it for a bit, to let it settle. I also realized I had better do something about my finger, which at this point was dripping blood. I managed to stop the bleeding, wound some gauze around it, and grabbing some heavy gloves, and  trying to slow my heart rate, I was off to make a second attempt at capture. The frightened hawk had clutched the blanket in its claws and by lifting the blanket with the bird attached I was able to get it into the box. I carried the box with its priceless life inside, to a spot near the house, that was in the shade. I put a cloth over the top, and hoped for the best.

I then went in and got supper ready, as if I hadn't had an incredible hour of rescue. D and L came up to have a look at the bird, as I had texted L to tell her she had been right about seeing a hawk.

Hope had told me that someone would call me regarding a pick-up of the hawk, but I hadn't heard anything by 7:30. I had known it would be hard to get a volunteer to drive all the way to the valley, but also knew that Hope had remarkable volunteers who did just that. Anyhow, I called Hope back, and she was still unable to get someone, and had also had three other injured hawk calls since my first call. We considered my keeping the hawk over night, which I would have done, but it was in pretty bad shape. I wondered if we could meet a volunteer half way, in Windsor. Hope jumped on that, and again put the call out. I had just hung up from talking to Hope, and the phone rang - the volunteer driver would meet us in Windsor at 9:30. She told me her name but I can't remember it to personally thank her.

My daughter D had earlier suggested that she would drive the hawk to Seaforth, (she had taken an orphaned raccoon in last year). I now called her to see if she would be willing to drive to Windsor with me to meet the volunteer. She willingly agreed and she, L and I with the hawk, that was now sitting up in the box, set off for Windsor, about 45 minutes away with D driving.

After a short wait in a Tim Horton's parking lot our rescuer arrived. I gave her the information she needed, and thanked her, and off she went taking the hawk to Seaforth. I told her how wonderful it was that she would do this. Then we headed for home.

I had initially thought that the hawk was a female Northern Harrier, after checking my bird book, but the rescuer took one quick look and told us it was a juvenile Red-Tailed Hawk. Checking my faithful bird book again after getting home, I realized that a Red-Tailed Hawk is a big bird, and was glad that this one was a juvenile, or I might be missing a finger today.

Here are the two pictures that I was able to get. Such a beautiful bird. I hope it makes it through the surgery last night. I cannot predict the outcome for this creature, but am thankful that I was given the opportunity to help it. Some might say, 'let nature take its course', but perhaps they haven't looked into the eyes of a helpless creature. 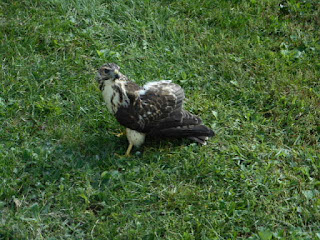 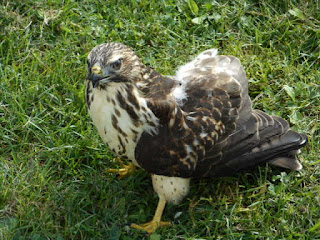 I hope things went well for you Red-Tail

Thanks to D and L for helping me to help him.

And an extra special thank you to

for all that you do.

September…. A time for back to school adventures… a new grade, and a new school. My youngest granddaughter set off to high school early this morning, and the oldest one will leave for university on Sunday. Even when you know it is coming, it is still hard to settle it in your mind that the little ones have grown up so much. 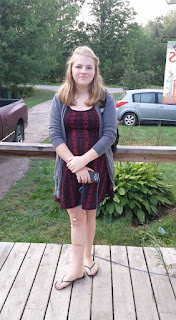 Soon it will be time to get back to my regular activities, choir practice and Bible Study. I have to start revving up my mind to thinking about these things. 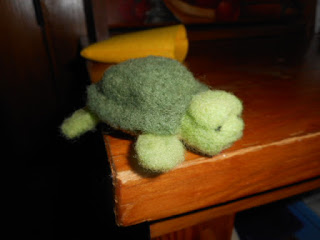 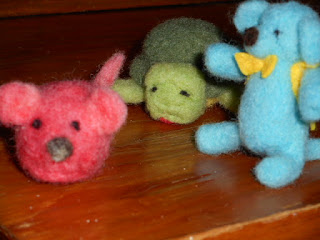 I have also been doing some painting, and hopefully will get it done before too long. I am working on a picture of a deer in the woods.

A little update on the card from the last post. I counted years, even on my fingers and am sure it could not have been my 29th birthday, as neither one of the girls could have made it when I was 29. Perhaps they were trying to be kind, and took 10 years off.  Very strange. J 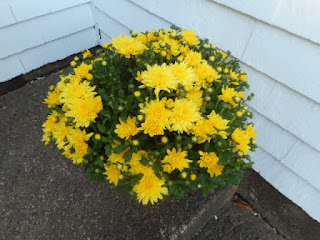 I was able to have a little get together with D, R, L and R’s friend C and his mother C. It was a nice evening, and I was happy to do it as a way of wishing them a good year. C’s mother brought me lovely potted mums. So pretty.

Have a great week and best of luck to all the young people who read this blog. Blessings as you return to school.