The Iles de la Madeleine are located in the middle of the Gulf of Saint Lawrence, and part of the Province of Quebec. There are about 12 islands, five of which are linked by long thin sand dunes. From northeast to southwest is around 88km. They are quite simply, beautiful! They are very different from Nova Scotia, as there are not a lot of trees, except in a few places. Nothing like the miles and miles of woodland we find here. It is a vista of sand, sea and sky, salt marshes, different coloured houses, cliffs and caves. The wind is a constant companion. Spellbinding.

If you are fit, the way to see the islands is to bike. In our case, the car had to surfice. In one of the many lagoons, we came across kite surfers. The kites are huge, and as the wind catches them the surfers are carried along, at a pretty good clip. Some pros were doing tricks, and others were enjoying the speed as they skimmed the water. It was so neat to see the sky filled with colour and the surfers going back and forth racing along the water.

In English, we say the Magdalene Islands, but in French it is Les Iles de la Madeleine, which initially confused me, because there is no 'g' in Madeleine. In 1629, Samuel de Champlain wrote on a map, 'La Magdelaine'. The name, Iles de la Madeleine, was given to the island archipelago, in honour of Madeleine Fontain, wife of Francois Doublet de Honfleur, concessionaire of the Islands, in 1663. (From theOfficial Tourist Guide). During the "Grande Derangement", when the Acadians were deported from Nova Scotia, some made their way to these islands. The French spoken on the islands is rooted in Acadian French. The Madelinots, as the islanders call themselves, are warm and extremely friendly.Those with whom I attempted to speak in my old high school french were very patient, and the conversation usually ended up with laughter, and sometimes hugs. Delightful.

There is so much I want to say about the islands.I will share a few pictures, and you can see what I saw. I was disappointed when I got home, because the shots do not do the islands justice. 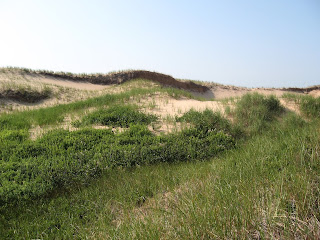 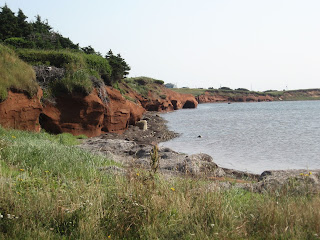 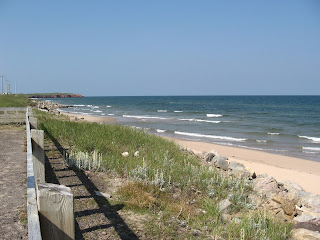 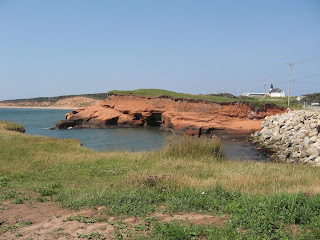 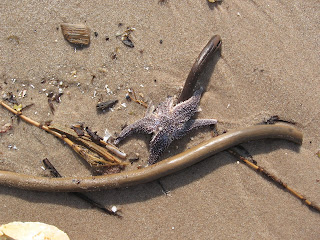 Little starfish trying to make its way back to the water. 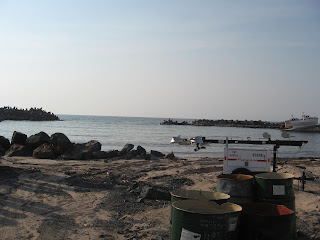 Working of a new wharf 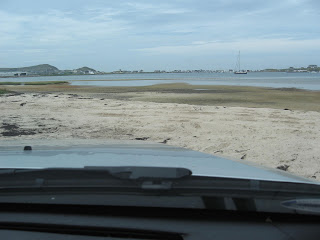 I have more pictures to share
and stories to tell.
It will take time for
me to do it well.
Au revoir.
Posted by Bonnie at 7:51 AM 1 comment:

The Captain and I took a little trip a while ago, and it has taken me a while to just sit down and write about it. Before I begin though, I would like to thank my readers for your very warm and kind comments on the previous blogs.

We left on the 30th of July for Souris, Prince Edward Island, from where we would catch the ferry to Iles de la Madeleine. Neither of us had been there before, although the captain had flown over it during his years in the airforce.

We took a ferry from Nova Scotia to PEI, and stayed at the Lighthouse and Beach Motel that evening. This is the view from the porch looking down across the grass, and Sheep's Pond. 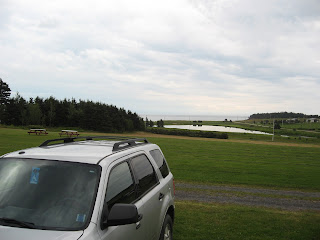 Since we had a few hours the next day, before the ferry would be leaving, we visited some friends, and then went the East Point Lighthouse. On the Admission price list, there were the initials "A.W.E." and when we asked what they stood for the nice young man told us it meant "Adults With Experience", that is, seniors. I like that. 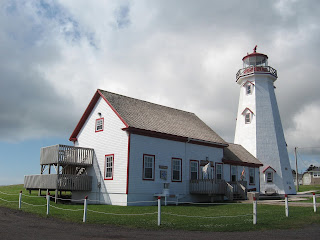 Then we headed for the Souris dock as we were to be there an hour before the ferry left. 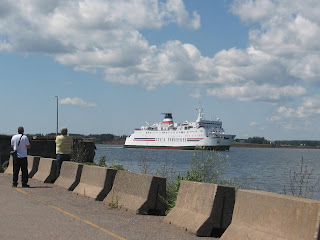 The Ferry Comming in 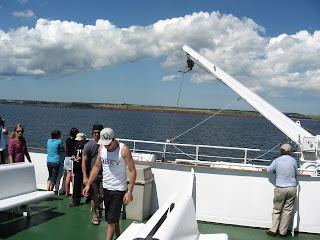 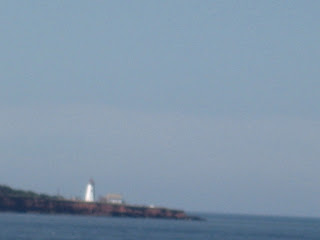 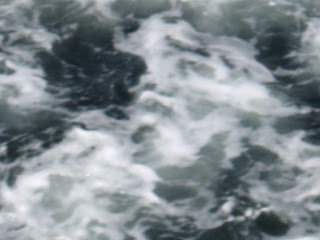 We are churning, on a five hour ferry ride to the Iles.
So much to tell you, but not tonight. I had to make the effort to start this. Now it won't be so difficult to get back to it.
Posted by Bonnie at 8:51 PM 5 comments: