So, I see that my last post was in April. I have to read it to see what happened. I think that since then, we have both gotten our 2 covid 19 vaccines. I'm happy about that.

The Captain did not get his first shot as planned. He went into the hospital the night before he was to have it and was in for a week. He was not impressed, since the hospital is the last place he would want to be. However, it was necessary. Along with a few other things he had a stone in the bile duct, and had to go to the city to get it removed. He would not have anything else done, and so was discharged. He does have homecare once a week now, to help him shower.

My legs and feet are still giving me problems, but I shall unload on my doctor next week, and see what happens. I don't know if it is Fibromyalgia or not. Guess I'll find out.

We are expecting the remnants of tropical storm Elsa to hit us tonight with heavy rains and wind. Hope it isn't too bad.

The last Sunday in June, we were able to have in person church again, with masks and social distancing, but in person. We had been closed down for about 8 weeks again because of the covid variant. The province is doing fairly well, at this point.

Today, the 2nd of August, leaves me wondering where July went. Is it just that I am getting older that the time passes so fast, or am I passing out for 2 or 3 days during the week. It seems like summer just got here and it is half gone. There was so much I wanted to do outside but didn't get to. My legs will not let me do very much. The Doctor is a bit concerned and I will be seeing a vascular doc to get some tests done, since she thinks part of my problem is circulation. That would not explain the problems I've had over the years. Anyhow, I imagine it will be a while before I get an appointment, as things have backed up due to Covid.

A few pictures to end off with. My garden is a disaster area this summer, but the flowers still find their place to bloom. 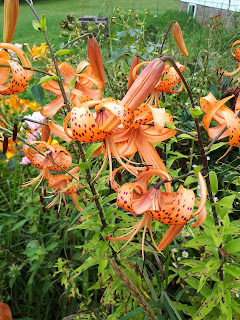 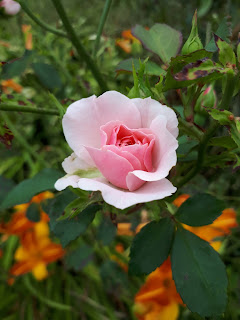 Some fun I had with coloured pens. I could spend hours just testing, trying things out. 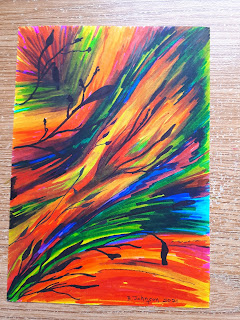 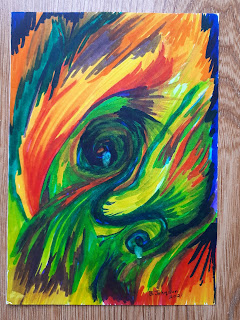 Summer is so hard on a poor little kitty. 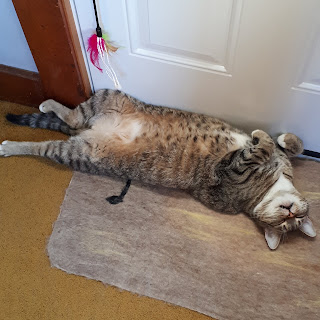 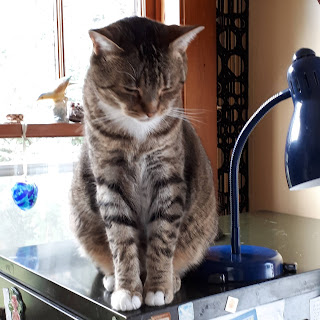 Well, time to stop. I've got laundry in the washer and the dryer, and I'm pretty sure they won't move on their own. Guess I'd better get moving.
So long for now,
Aslan & Bonnie