When I inquired about taking a few pictures in a cafe where we were eating today, the gal asked me if I  had a food blog.  If I hadn't have been in public I might have choked. Now....., those who know me best, are now probably rolling around the floor with laughter......Bonnie?  Food blog???? The funniest thing they've ever heard.

It's  not that I have anything against food blogs, or food for that matter, it is just the idea of me writing one. I do not like to shop for groceries. I am not great in the kitchen, and getting worse as time goes on, and I do not care if I eat. Well, I do eat, but not much.
But.......
every once in a while I do enjoy a meal, especially if it is a Belgian waffle, with whipped cream and
strawberries, and an excellent cup of coffee. 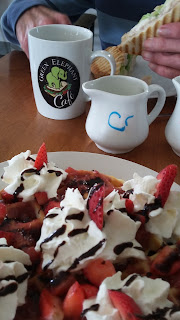 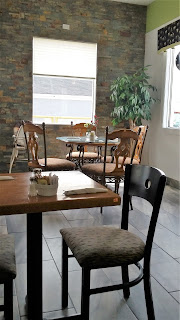 I took a few pictures with my phone, but I have a big problem holding the phone still, and not jiggling, and these are the only two that aren't blurred. This is the Green Elephant Cafe in Kingston, They have just added an addition, which is the picture above. It is bright, and welcoming, and they have the friendliest waitresses. I should have taken a picture of them. One gal, J, had run the Bluenose Marathon in Halifax on the weekend....she totally amazes me.... That is quite a feat. Maybe I will take my camera the next time and do it up right. Anyhow.....it was absolutely yummy and tasted like more, on another day of course.

It has been nice yesterday and today, with the sun shining most of the time, though there was a little shower this afternoon.  Yesterday I took my walking stick and went for a little walk in the orchard. I don't know how far it is to the pond, but I knew I would need the stick. I took a few pictures but my favourite is the snapper. 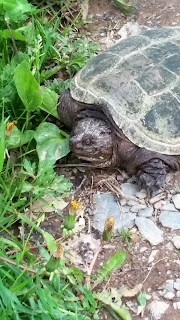 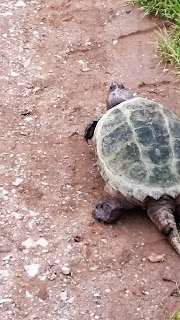 I am not sure if he/she was headed to the pond or not, but it went into the grass instead. 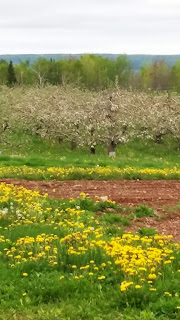 Lots of dandelions and blossoms for the bees 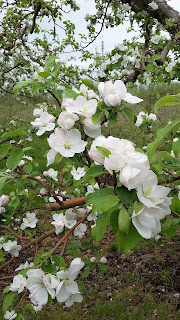 These are Gravenstein blossoms 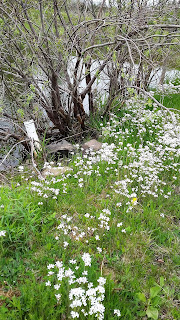 The edge of the pond has lots of these little white, four petalled wild flowers

As long as I am writing about food, here is a little squirrel who is
always checking out the bird feeder. 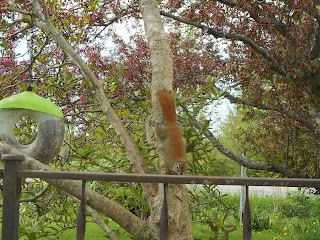 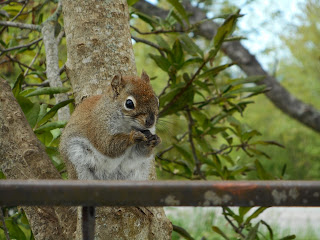 Needless to say, he/she is fearless

And then there is this delight.......yummy 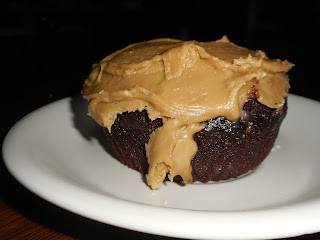 A gigantic wildfire is burning in one of our western provinces, Alberta. Perhaps you have caught a news broadcast about this. It is the Fort McMurray fire. Though it seems to be the biggest and has displaced a whole city there are many more wildfires burning in our west, with at least  80 fires burning in north eastern British Columbia. The pictures from around Fort McMurray are horrendous, and it is hard to imagine driving in your car between walls of fire being unable to see be cause of the dense smoke, fear gripping you as burning embers fall on the road and your car. This is exactly what I saw on the news yesterday.  Today, they say that the fire is growing larger, and could double in size by the end of today. It has been burning for five days.  Thousands of people have lost their homes and possessions and have made their way south to Edmonton, and other places of safety. Some people had earlier gone north, but with little in the way of accommodation and supplies, the Mounties are bringing convoys of cars back south through the burned city to get them on their way south. People, once they get to safe areas, the families can find their own places to shelter, with friends or family, or even strangers who have opened their homes to evacuees or there are also places opened where families can stay if they have no other options. It is beyond belief. Some of the pictures just break your heart. Such devastation. First responders are under great stress, and are overwhelmed. The fire has been described as a monster, eating its way through thousands of hectares.
A great many maritime people had gone 'out west' to find jobs, and now some are coming home, jobs gone and no expectation of one after the fire does its worse. Homes, jobs, livelihoods gone.

Monday, 09th
I'm not sure when I started this, but the fire is still burning though it has moved north east away from the town, but is burning through hectares of boreal forest.

I had a really nice spur of the moment trip back to Ironwood, yesterday. Dawn suggested we go and I jumped at the idea. Again, it would be a short visit.....had to get home by supper, but I was happy to spend the afternoon with my girls and the grandbaabies. The weather was nice, warm and sunny. I took 56 pictures, but I won't share them all here of course. It will be hard to pick out the best but I shall try.  Heather gave Dawn and me flowers and then when I got home, Rae and Colton brought me some tulips. So nice. It was a good day. 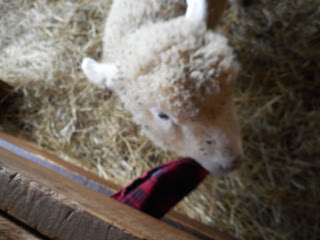 This is little 'Stinky' and he liked my shirt 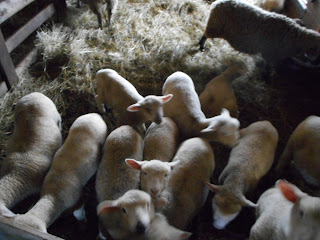 These little ones are looking for their bottles, since
they were bottle fed, though not as often now. 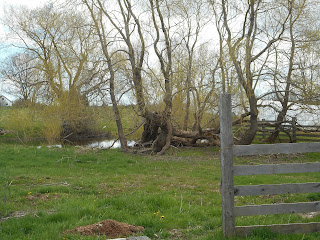 One of my favourite views on the farm 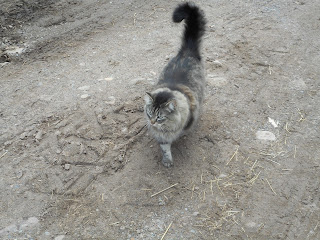 Meet Franklin. He joined us on our walk to the barns 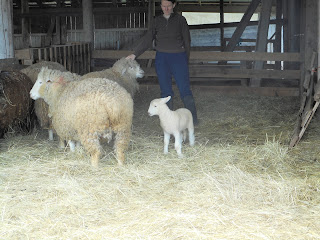 This little lamb was born a week and a half ago. He was a
little timid. 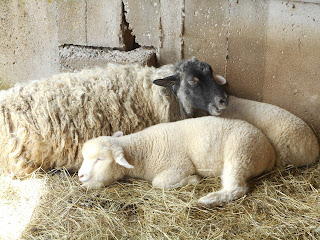 These little lambs(twins) stick quite close to their mom. 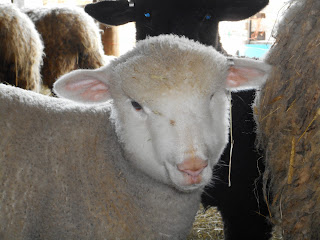 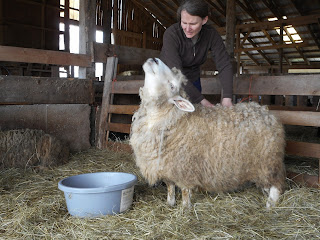 This ewe just loves to have a good scratch. You can tell she's
enjoying it and H is working hard to do a good job 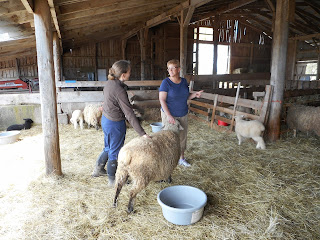 Dawn and Heather giving a little rub to the ewe
and having a conversation as well. 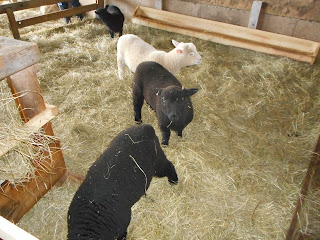 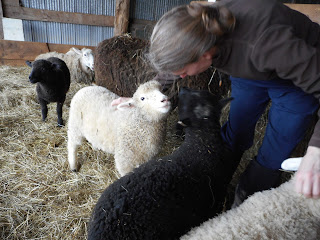 They look like they are paying close attention to H
We all talk to the ewes and lambs as though they understood
every word, but I think they do understand H

Friday, the 13th........
A few days later.........the wildfire has moved away from Fort Mac and the cleaning up has begun. It will be at least two weeks before the people can get back in to see what is left of their homes.
I am still having difficulties settling down to do anything specific, but am feeling better, so that's a good thing.
I thought I would finish this off before too many more days passed. As it is, it is old news.

The leaves are beginning to pop on the trees,
and even with the cooler mornings
Spring has finally arrived.
Grass is a dark green
Dandelions a brilliant yellow
Sky, varying shades of blue
The sun warming.
and the peepers peeping.
Ah, Spring
Welcome

Short Visit to the Farm

A week ago Saturday, serendipity stepped in and I was able to get out to my daughter's farm, where I finally saw the many little lambs that have arrived this spring. My goodness, but they grow so fast. In pictures they appear so small, but in a matter of a few weeks, they are quite big. They are so sweet. I could watch them for hours.
It was a little chilly Saturday, but the rain held off until the trip home. 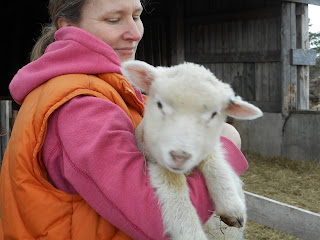 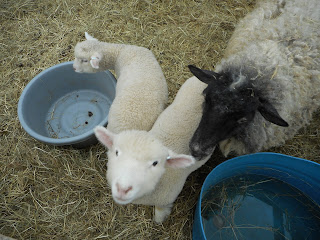 For some reason, I didn't take a whole lot of pictures.
Guess I was too busy just watching.
The day was cool, but it was wonderful to see all my lamb grandbaabies.

It is a new week, and I am managing to feel a bit better, but have yet to really take interest in things I want to do. I do what I have to, and hopefully as the days go by, and the sun shines more than the rain falls, I will begin to do more things. Depression is a thorn in the side, but I am in hopes that this low session has passed and brighter days are ahead.

As I type there is a great amount of noise over my head. We are getting our roof shingled. So many shingles blew off through the winter, I began to wonder if there were any left up there. I guess there were enough to keep the snow off the upstairs ceiling, but it will be nice to have the roof done (if the rain holds off).