Despite the weather, the trees have bloomed and everything is going along as it should.

Sadie and I took advantage of one of the rare days when the sun shone and the wind was not chilled, and we took a slow walk down into the orchard. It is always so beautiful when the blossoms cover the trees, and you can hear the buzz of the bees as they do their job of pollinating. 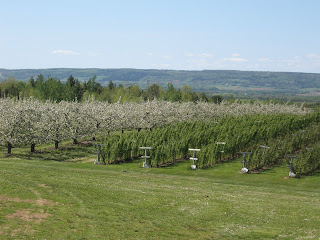 The raspberries are awaiting their turn 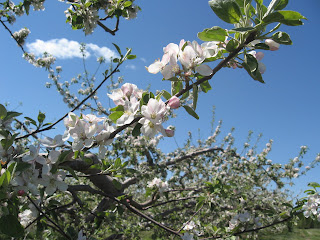 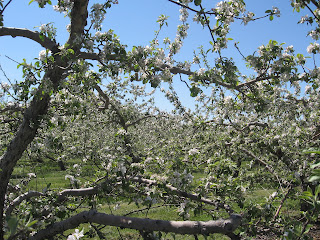 Looking through the branches 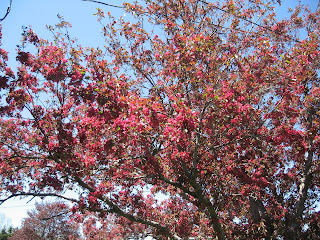 The flowering crab tree, on the lawn 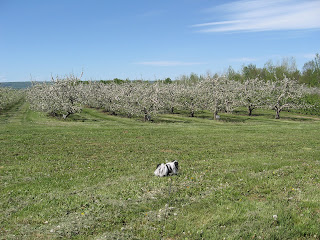 Sadie and another view
There are lots of things happening on the farm now, and Dawn has some plans for a garden.
I will share those as we go along.
The Captain is no longer farming, and the orchard is now under Dawn's loving care.
She is doing a great job.
I can't wait for her garden to come to life.
Have a great day
Posted by Bonnie at 10:59 AM 4 comments:

Oh my. It is cold today, I mean chilly. No, I really mean cold. A brrrrrr kind of cold. It is 6 degrees Celsius , or 44 F, and the wind is blowing. I even heard that word,......snow...in a forecast on the radio. Somewhere in the Maritimes there is a possibility of the white stuff......not here...I hope.

I was able to spend a few hours in the garden this past week. Wednesday, I spent too much time bending over, (I never learn) and so my back was not pleased, nor my legs. Thursday, no garden work, then spent a bit of time yesterday. I have a very small flower garden, with perennials, so it was more a case of pulling weeds and transplanting a few things. I really like to get out there and do a bit. Even though it is not the best garden, it is my garden, and I enjoy the flowers. One of my bird friends has planted a sunflower seed, I see. I'll leave it there and see what happens.

Yesterday, the first hummingbird of the season visited the feeder. It must be shivering today. This morning I heard a tap, tap, tapping on my door, and looked out the window to see what it was. I saw, what I think was a Yellow-Bellied Sapsucker. Beautiful red on the head and throat. First time seeing one of these. Unfortunately I didn't get a picture of either bird. 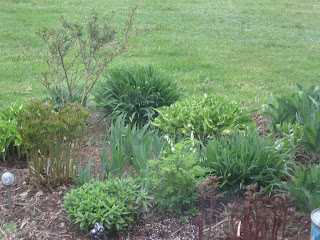 It ain't much, but it's mine
The sun is actually trying to shine right now. The sky is very cloudy, but every once in a while
a blue patch makes an appearance. Come on sun, come on warmth.
Lots of things to do.
Hope  springs eternal!

I just took these shots, and thought I would share.
Such a strange but beautiful sky.
It has been showering off and on all day,
and there have been thundershowers all around.

And then this beautiful rainbow. 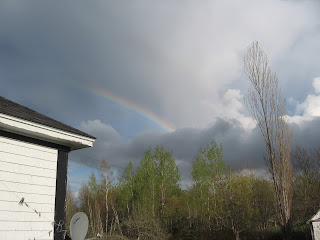 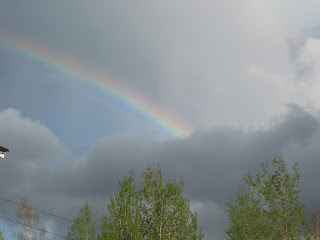 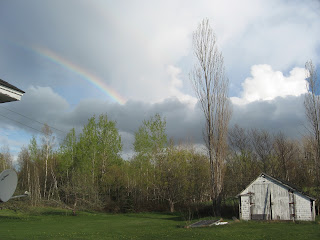 The last few days have been beautiful, with lots of sun, and a bit of wind, but so nice. The lawn has been mowed once, but the grass is growing fast and soon we won't be able to keep up with it.

The trees are greening and the work on the farm picks up as Dawn tries her hand at running the whole kit and kaboodle. She has her dreams of what new things she wants to try, while at the same time, doing all the regular things that keep the orchard going. 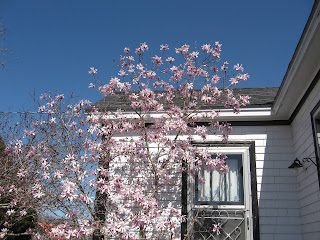 The magnolia tree is in full bloom, and some of the petals have even begun to fall. The pink colour does not show up well in this picture.

I spent a little time working on the garden, such as it is. There are some weeds, but not nearly as bad as last year. I just have to go at it slowly, a little bit at a time, which is better than nothing.

Hope the sun is shining in your life.﻿
Posted by Bonnie at 3:17 PM 6 comments:

A Visit To Ross Farm

On May 1st, we drove to Ross Farn, about an hour away from home. Ross Farm is a part of the Nova Scotia Museum system, and is a wonderful place to visit. Here is the website
http://rossfarm.museum.gov.ns.ca/

This farm was settled in 1816 by Captain William Ross, who was asked to settle this area, along with other disbanded soldiers, who were given land for their service. The settlement was called Sherbrooke, but is now New Ross.

Five generations of the Ross family have lived and worked this farm, from 1816 until 1969, when the New Ross District Museum bought the property, and turned it in to a museum.

It is a working farm to this day, open year round, and visitors are treated to a life-style far removed from present day. The interpreters are dressed in period costume, and work on the farm as it was done in the 1800s.

I have been there several times over the years, and have always found it an interesting place. As it says on the farm brochure, "Every day is Special", and indeed, this is true. I have only been there in the warmer months, but they hold various activity weekends throughout the winter. There are lots of hands on things for visitors to do, and many school classes take advantage of this.

On the farm, there are heritage breeds of animals, that would have been common when the area was settled. 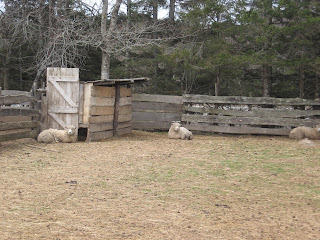 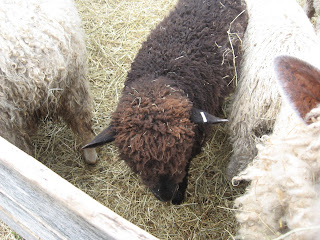 There are not many black sheep born, usually they are white.
This little one's special. I should have written down the breed to be sure
but I think they are Cotswold. Their wool is very long. 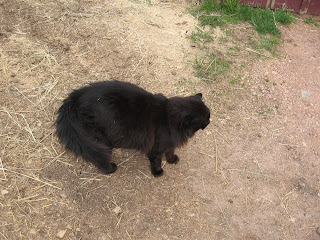 Not a heritage breed, but very friendly.
No working farm should be without one. 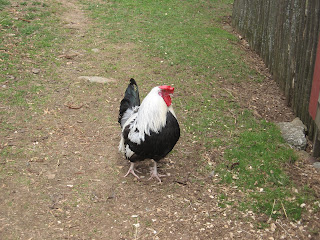 This fellow was strutting his stuff 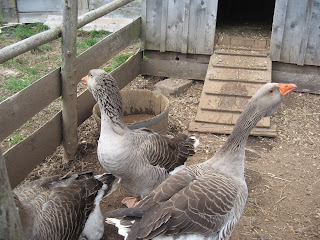 I had a great long chat with these fine feathered friend.
Actually, they did most of the chatting (read honking) 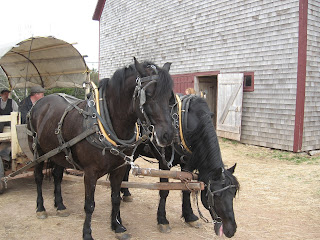 Horse team and wagon, with driver Andrew.
Had a great talk with him, as he explained how different things
were done, and what work was accomplished in the winter months.
It was the first day out for the team, and the younger horse, (on the left), was feeling
quite spritely. Andrew figured he'd settle down a bit after lunch. 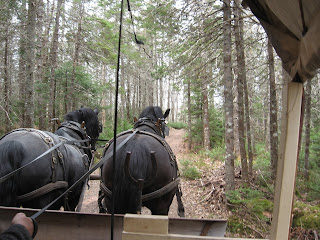 A wagon ride through the woods down by the lake.
Very nice. 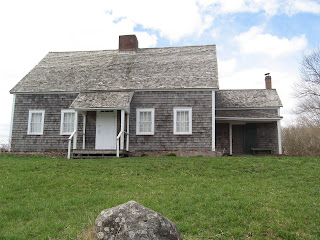 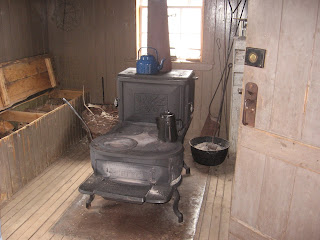 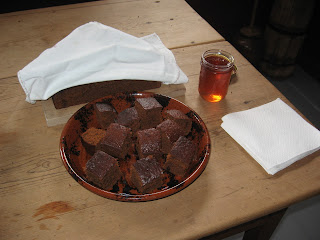 At Rose Bank Cottage we were invited to have a cup of tea and
a delicious piece of molasses cake baked in the summer kitchen
stove oven by Vanessa.  A pleasant surprise.
Vanessa shared a lot of information with us as well. 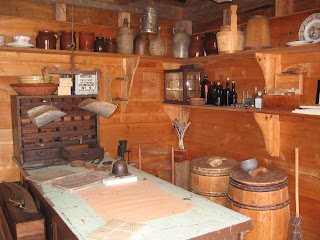 This is the store where folks would have purchased or perhaps
traded for needed supplies. Definitely not a Walmart. 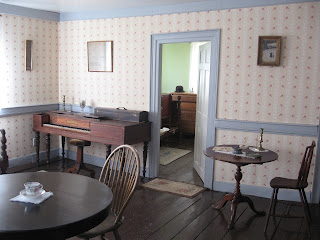 One of the rooms in the house, probably the parlour 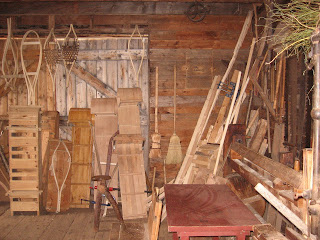 This is the workshop that stands beside the store where we were given
a lot of information about the wood used to make the various things, and how they were made.
Aubrey was the interpreter on hand to share his knowledge.
The oxen were not out that day, but they would soon be out and working on the land. 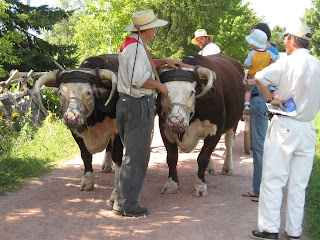 This is a picture taken a couple of years ago.
A great day with friendly people and lots to learn about our Nova Scotia
Heritage. A living museum.
I know I'll be going back.
Have a great day.
﻿

I have been wandering around in the shadow of fibro for a while. It has led me to have little interest in doing anything. It threw me down and hit me with headaches, backaches, sore mouth, sore legs and more. I haven't really felt like doing much, least of all blogging. If I got through the things I had to do, that was good. Weariness just took over.

But enough of that! I decided today, that I would just get back to blogging, and try to enjoy the beginning of spring here on the mountain. The sun and the green has finally arrived, and it will hopefully give me the boost I need.

My 'not done' list is as long as my 'to do' list. There are just too many things that I want to do, and as the days move along, and the sun warms them, perhaps I will be able to tend to at least some of these things.

My youngest granddaughter celebrated her 12th birthday last week, and she asked if her mom would take her to the auditions for The Next Star. This is a TV program for the young, which is why I hadn't heard of it. It is sort of like Idol, only for the under 15 age group. Well, Dawn took Lindsay to Halifax and spent the day standing in line or waiting in a room for Lindsay to have her turn. I guess there were hundreds of hopefuls there. Lindsay had the time of her life, and enjoyed the day even before she got in to sing for the judges. She didn't make it past the first level, but it didn't matter to her. She just had a good time, talked to a lot of people, met and had her picture taken with one of the stars of the program. She said, "It was the best day of her life". 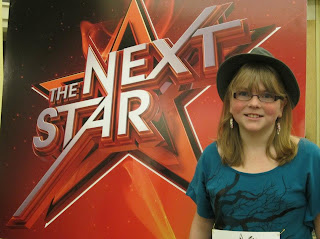 A reminder of a great adventure.... 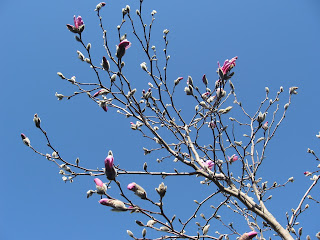 Buds on the Magnolia, bursting forth 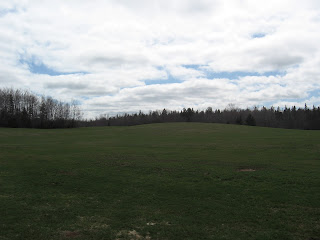 The greening grass in the hay field.
This is the extent of my post today. I hope to follow up with another post tomorrow.
Have a good day
Posted by Bonnie at 4:41 PM 5 comments: