Bumps in the Road

I totally understand that there always will be bumps in the road, and things don't always turn out the way one would like. This is especially true in my life what with the fibromyalgia and depression always hanging around, ready to pounce on me without notice, but the Captain is different, until recently.

I had great plans of posting at least every Sunday in this new year, but that fell apart, as I see that my last post was the end of January. I keep forgetting that I started this blog to help myself, by writing things down, and lessening the stress in my life by doing something for myself...... ah.......yes. Most of the time it does work, because I write about, what else, the weather, or nice things that I have experienced, showing pictures of where I live and where I have gone, and bragging about my granddaughters. It's not really very exciting, but it is what it is. I also greatly enjoy reading blogs that I follow, as they are a window on other parts of the world that I can never hope to see in real life.

The Captain, a few weeks ago, had a bit of a spell. I don't know what else to call it. It only lasted about 10 minutes, but it scared his friends enough that they called the ambulance, and came and got me. (He was at darts at the community hall). The Captain, being a very stubborn man, declined to go to the hospital, though the paramedics strongly encouraged him to go with them. Since he said he felt okay, he wouldn't go. I called the doctor the next day, and she wanted him to go to the hospital then where he would have tests done to see what the problem was. Again, he refused, and therefore, because of the doctors thoroughness, and the Captain being asked not to drive until an answer was found, we have spent the last four weeks driving to hospitals and doctor appointments for the tests that could have been done, had he gone to the hospital when it was suggested. He has had an ECG, a CAT scan. a 24 hour heart monitor, blood tests and several visits to the Doctor. Still to happen, a visit to the stroke team and an appointment with a heart specialist. There is, at this point no clear answer, but a strong possibility he has been having mini strokes. I didn't mention that he had had 2 or 3 of these spells before the last one, and of course hadn't told me or anyone else, including the doctor.

And that is where we stand now......at a bump in our road........definitely not knowing what the next bump will bring. Here I sit rehashing all that has happened and realizing that considering how tired I have been during the past weeks, I have managed to do all that was expected of me. My patience has been tried, as the Captain has a short fuse, and misunderstands what I say, or doesn't get everything that is said to him by the doctor. I am being worn down trying to answer the one word question, why?
Heaven help me, I don't know all the answers, and it is funny, well not really, but when I do answer the question, the Captain then questions my answer or says I'm wrong. Give me strength, Lord.
I know that if it wasn't for my girls, my church family and my friends, I would be bouncing off the padded walls in a locked room.

I don't usually carry on so on this blog, but I guess I have to get it all out, before the top of my head blows off, hits the ceiling, goes through the roof, and then I would have to clean up the mess, as it is actually going to rain today on top of all the snow we've had.

And that's life on my little part of the mountain....such as it is..... Things could be worse. So many folks around are facing difficult health issues, death of loved ones, and loss of a home because of fire. I need to count my blessings, go around the bump and keep going, one day at a time, which has always been my motto.

I try, but there are some days it is a real test. 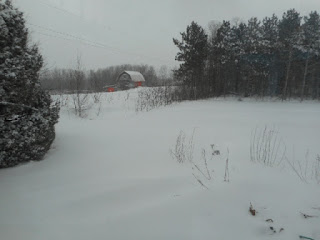 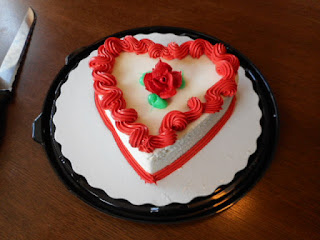 My dear Heather visited on Sunday, and brought
me a valentine cake. A time with her was just what
I needed, after a long four weeks.

Sometimes words flow from the brain to the fingers,
and it is hard to rein them in.
I wonder, should I let them run,
or start all over again?
No- I'll leave it as is written,
For this is who I am.
Stressed, sore muscles, weary and concerned
I can just do what I can.