Having just finished my second cup of coffee, I decided that now would be a good time to write a little bit for the blog.
Nova Scotia has finally welcomed winter, and this what it looked like out my window yesterday. 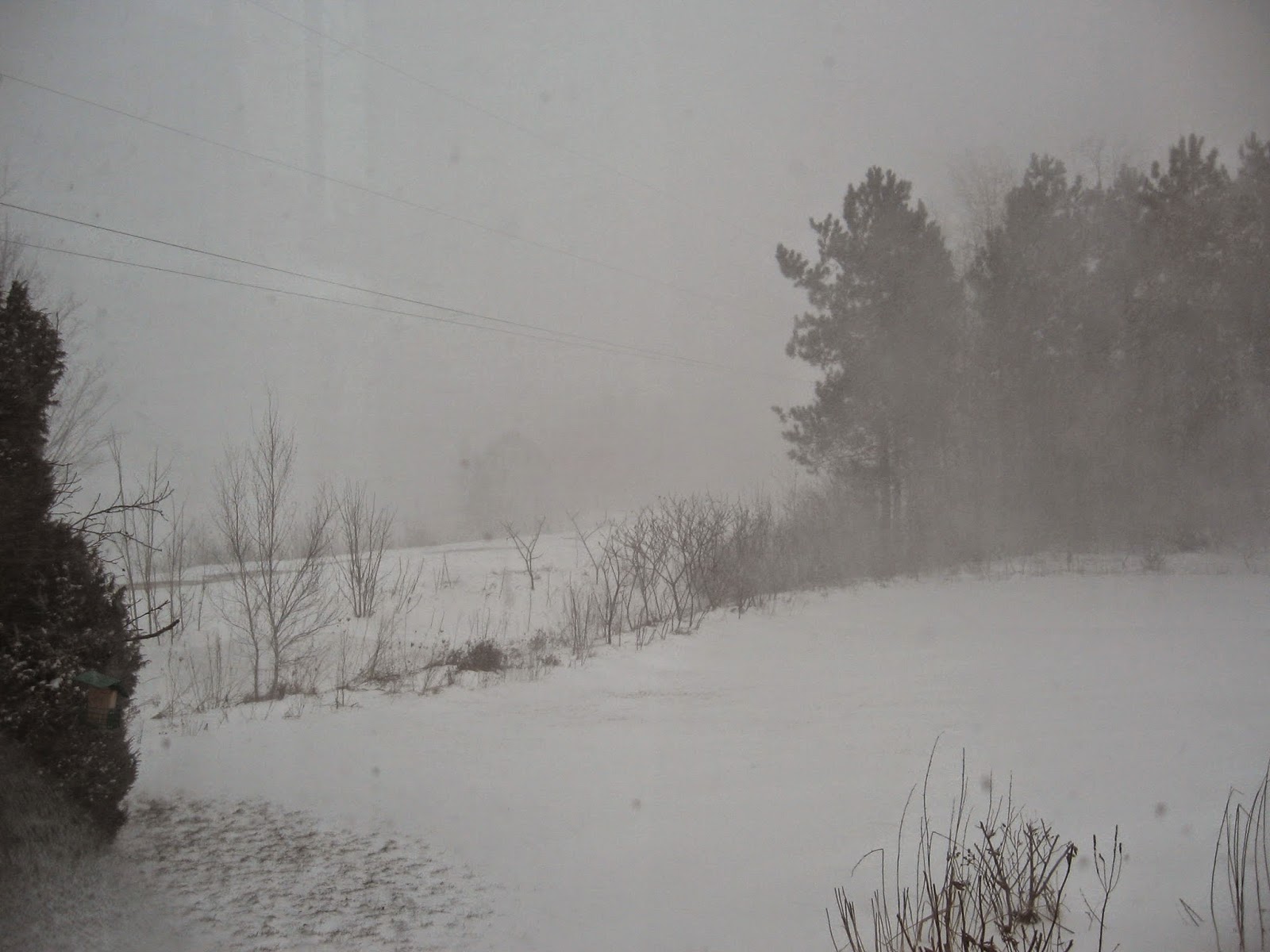 The windows rattled as the storm raged with gusting winds and
blowing snow. Almost everything was shut down for the day.
The border between New Brunswick and Nova Scotia was closed, as the highway
was impassible.
The poor little birds had great trouble getting their food, between
the wind and the snow cover.
Not a very nice day. Above is a picture out the same window, this morning.
It is coated with ice.
Today, once again the schools are closed, and the roads dangerous.

I did not accomplish very much yesterday. A bit of vacuuming was about all. Not that I didn't have plans, but I just didn't seem to have any energy. I don't know what it is about storms, but they leave me feeling lethargic. Sadie too. She was not pleased with the snow hill on the back porch that she had to climb down and back up. She managed quite well, though.

Just listening to the news, and there are cars in ditches, and a school bus has gone off the road. I'm glad the kids under our school board are home for the day. Our back roads can be pretty awful after a storm.

More snow for the weekend is in the forecast, so perhaps we are getting the winter we didn't get before Christmas. I'm wondering what we will get in February.

Sadie and I are playing a little game......take the pill.....find the pill.....retake the pill. She has become very good at spitting up her pills without me realizing it. This adds a new meaning to reuse or recycle. If I find a pill on the floor, it is given again. She is definitely trying to tell me something.

There's not much else to write about today. Sunshine tomorrow? Here's hoping.

Rain, rain and more rain yesterday, washed most of the snow away. I gazed from my window upon a new pond which had developed in the side yard. Seeing that, I knew what I would find in my basement. It took a few hours, but soon the streams were running, and the sump pump busy doing its job. I'm glad that the power didn't go out here, though some people up the valley did lose theirs.
You've heard the story about the little Dutch boy who stopped the leak in the dyke with his finger.
I tried......it doesn't work.........not enough fingers.... 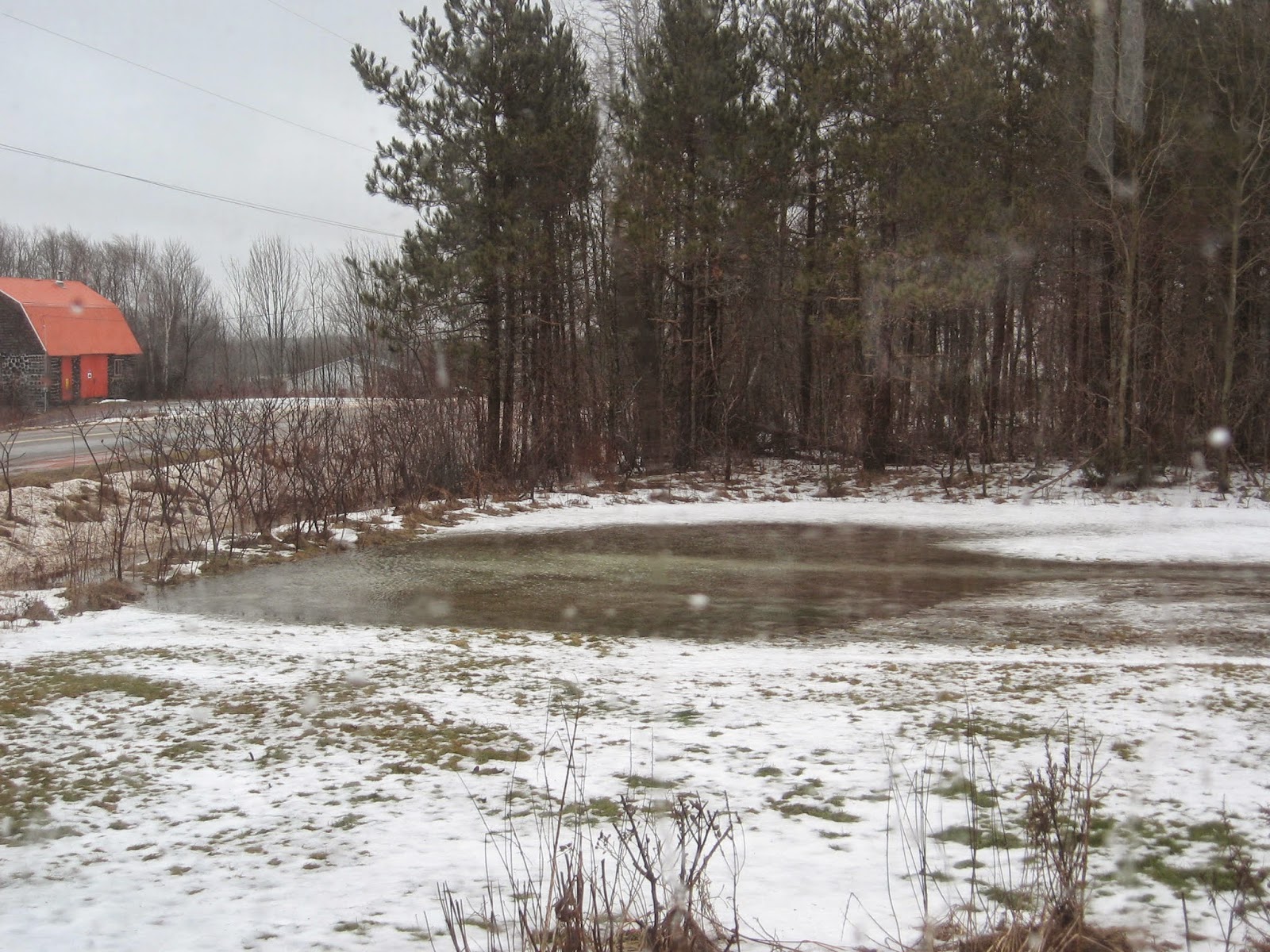 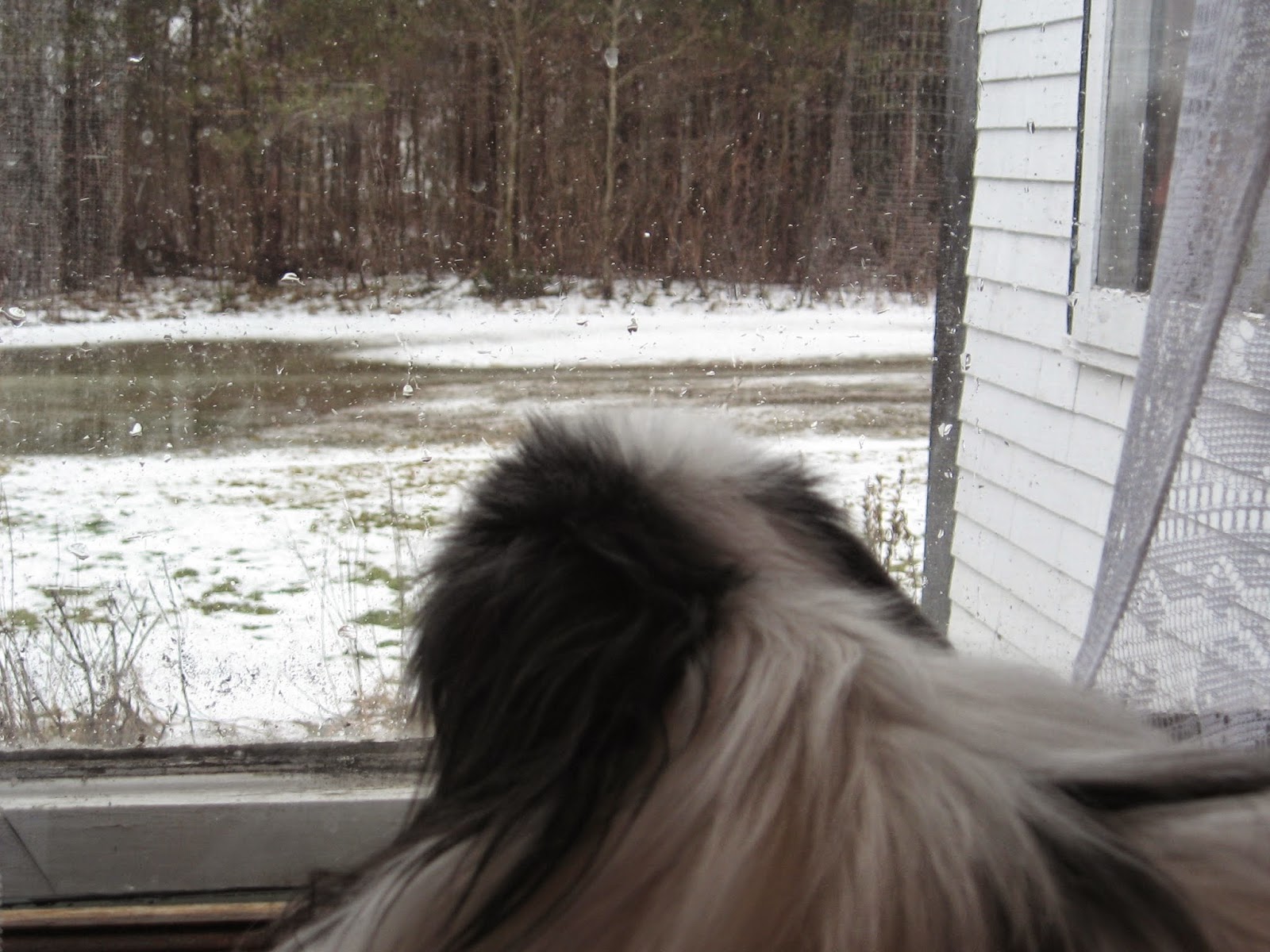 Sadie watching for any pond creatures that might appear...
None did.... 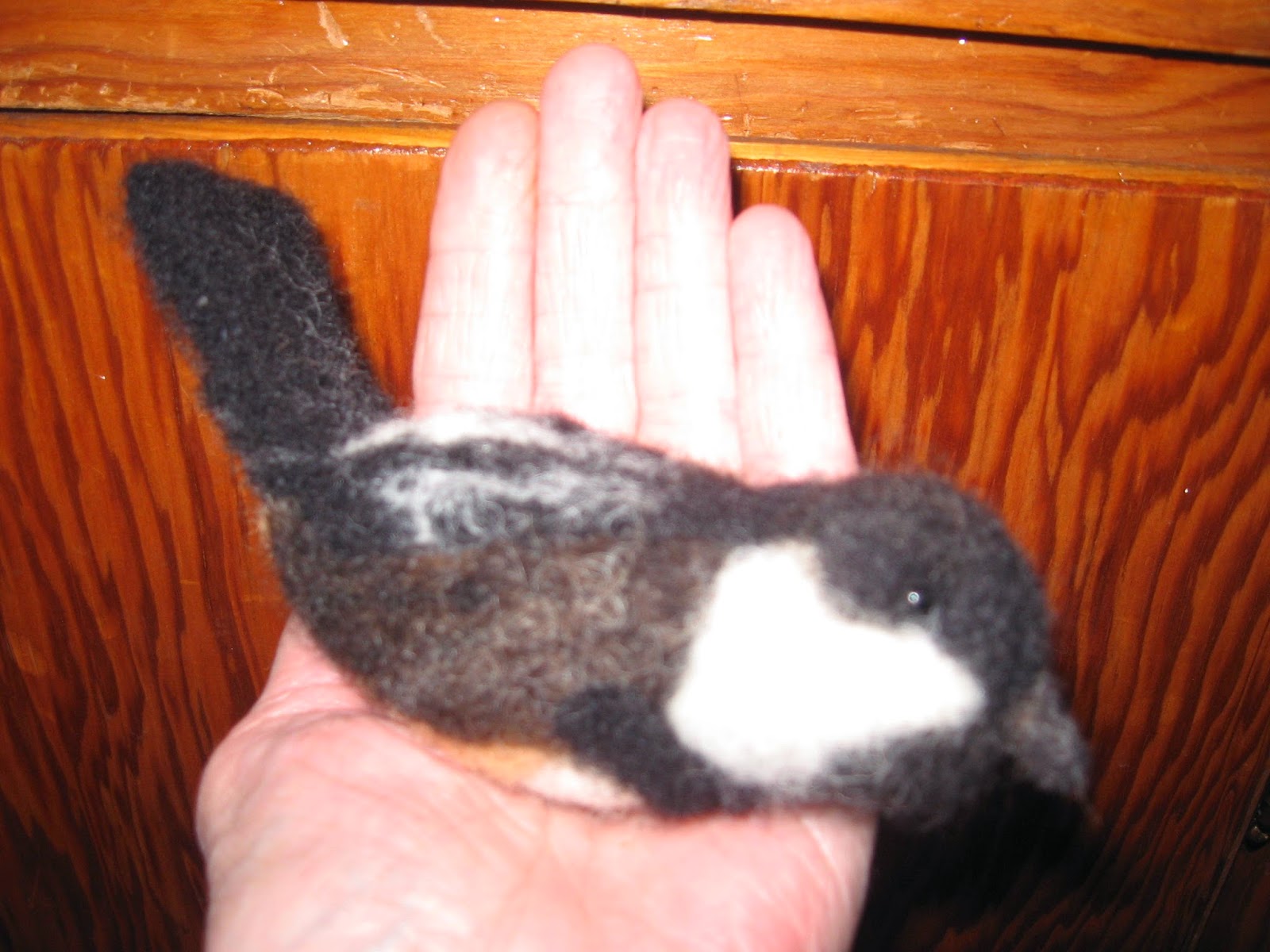 Oh look a tame chickadee....with no legs....Haven't
figured out how to make them yet.. 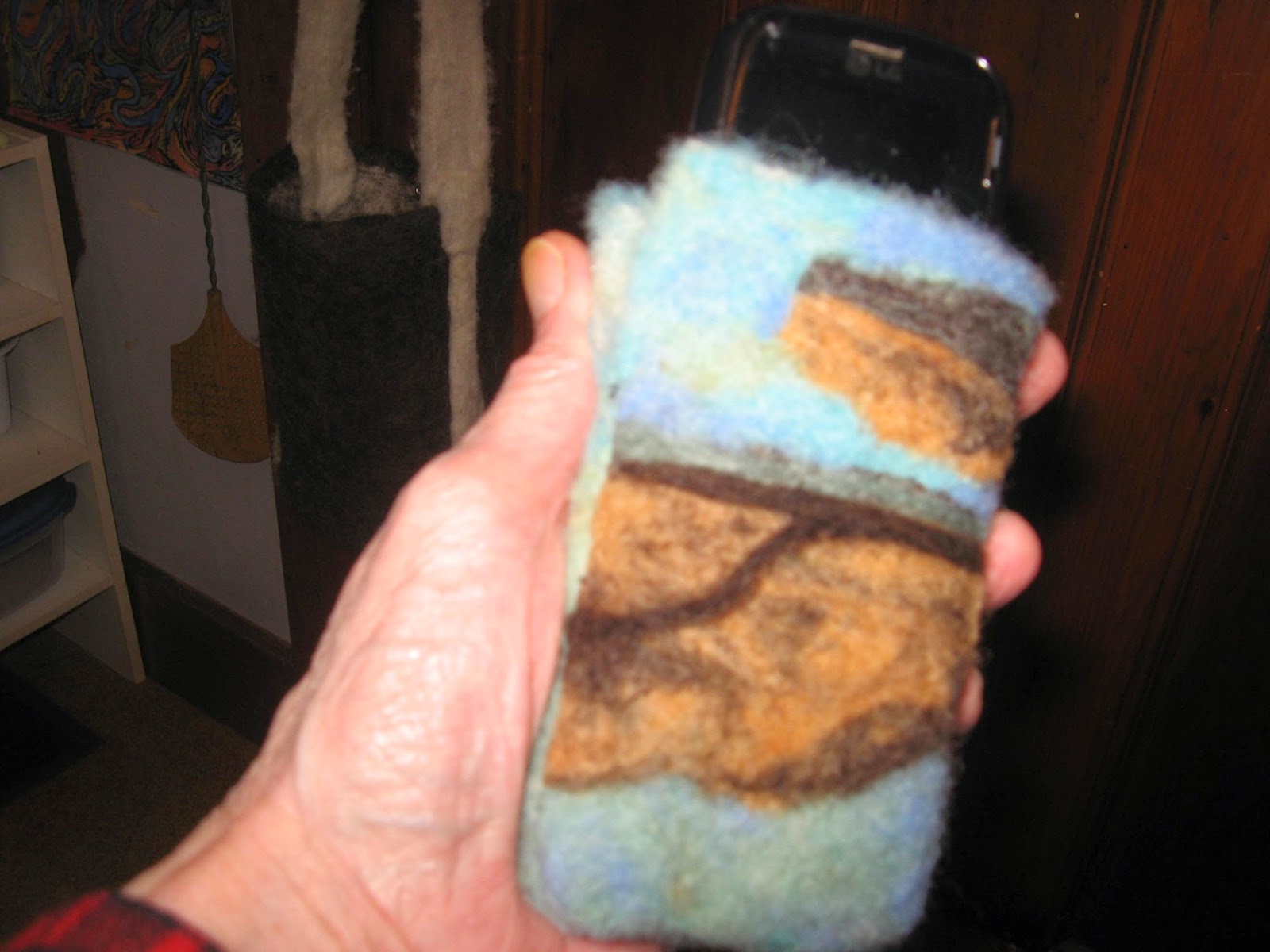 Sewed this closed..upside down.. I shall take it apart
and close the other end. It is for my phone. 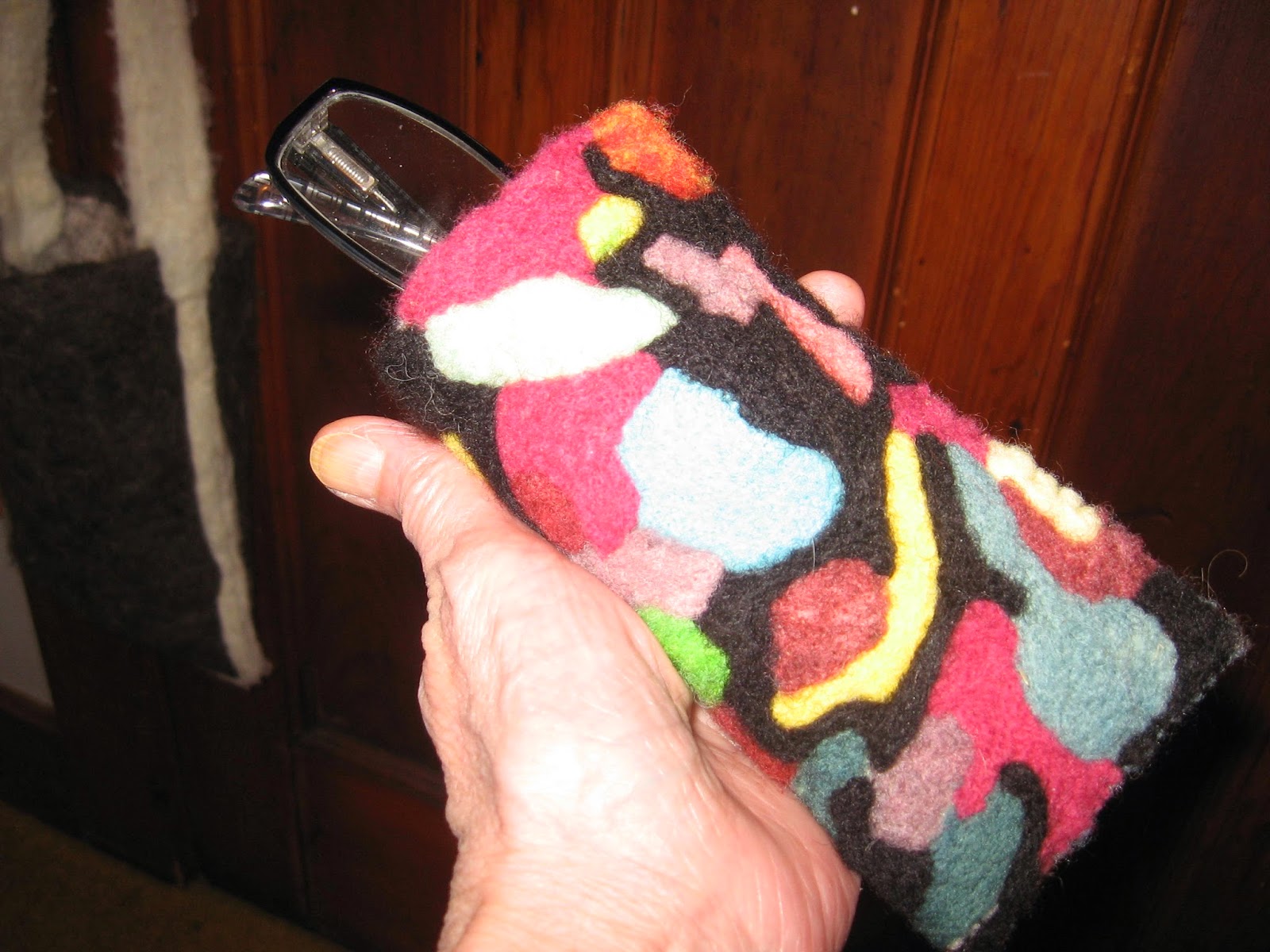 This one doesn't matter because there is no up
or down. It's for my glasses when I have to carry them.

It is still cold, and the wind is blowing, but the sun is shining.
It looks warmer than it is.

I am making a "Long Range To Do List".
You would not believe the things I already have on it.
Most things concern my beastly basement.....it is drying out today - yay.
I was walking around looking at everything and I thought,
I would feel so guilty if I died and the girls had to clean it out.
I just couldn't do that to them....so....
my Long Range To Do List.......
I shall have to stick around for quite a while to get it all accomplished.
Glad I didn't call it a Short Range To Do List. :)

...I was going to write this post a couple of days ago...it was going to be a rant, but I waited a day, then it was going to be a vent.....and now that I have settled down, it is close to a whine...
I hate it when things happen, such as a water pipe springing a leak, a little hole that allows water to spray out in a fine mist, causing water to drip from the wood ceiling, and then you notice it, when you hear the drips.

Then, in order to fix the pipe, the dear plumber, God bless him, came the day I called, (I think). If not, it was the next day. He asked if I could pull the fuse on an outlet that was very close to the spraying water. WELL, one would think that this would be an easy thing to accomplish. Not true in this house. The fuse box is in a little cold room, which has always been used, except for the first couple of years when my canning? was placed on the shelves. It is now full of stuff that I don't even know about.  It was the stuff, that I had to climb over to get to the fuse box, and then I had to decipher the writing showing which fuse was which. The headache that had started early in the morning was beginning to sink its claws in deeper.  After a couple of tries, I pulled the right fuse, and the plumber carried on, and fixed the pipe.

During the past several weeks or so, because of the cold, cold, freezing, weather, the back door, which is the one we always use, decided (not that a door can decided anything) that it would make my life difficult, by refusing to latch unless you slammed it with all your might. This of course became a bit of a game for the Captain, who found great mirth in the fact that I had such trouble shutting it.

Anyway...... Tuesday evening, as the Captain was off to Darts, he found he couldn't get out of the door....and I couldn't turn the knob at all. It seemed to be frozen. Being the good wife (not), I put my rubber boots on, after I emptied them of black oil sunflower seeds, that a wee mousey had put in there. I hadn't used them for quite a while.... This caused a round of laughter by the Captain. I was not laughing... I exited the front door, making sure that I closed it (this is important). Oh yes, the Captain went out using this door, before I closed it. The back door refused to open, so while he was warming up the car, I went to go back in the front door. Now, it is an aluminium door, and the push button, .... wait for it.....had......you guessed it.......frozen. Right! Now I was locked out of the house. Wonderful....... At this time, I was not counting my blessings, or the stars, but the number of steps I thought there were in the pitch black back stairwell to the basement, which I managed to navigate and got into the basement.

Being the real home expert on things that go wrong, I got my handy, dandy hair dryer, which I haven't used to dry hair for years. Mostly I use it for quick drying my varnished crafts or paintings, or defrosting the freezer, and now I can add, thawing out the back door nob. I managed to do just that, but had to stay up until the Captain got home, to make sure the door would open, and not need a little heat.... It was okay, and I took my aching body to bed.

We bought a new door knob and the carpenter who had come while we were out, replaced the old knob and said that it was totally worn out and broken. He fixed the door frame so the latch would catch.
Did I tell you about the flying window, and the reason the carpenter was here? I can't remember, but it would be too much to tell you today. I am tired just reliving the events thus written.

Blessings on plumbers and carpenters everywhere!!!!

My sweet little Sadie had her 11th birthday yesterday. A time to celebrate her endurance and will. 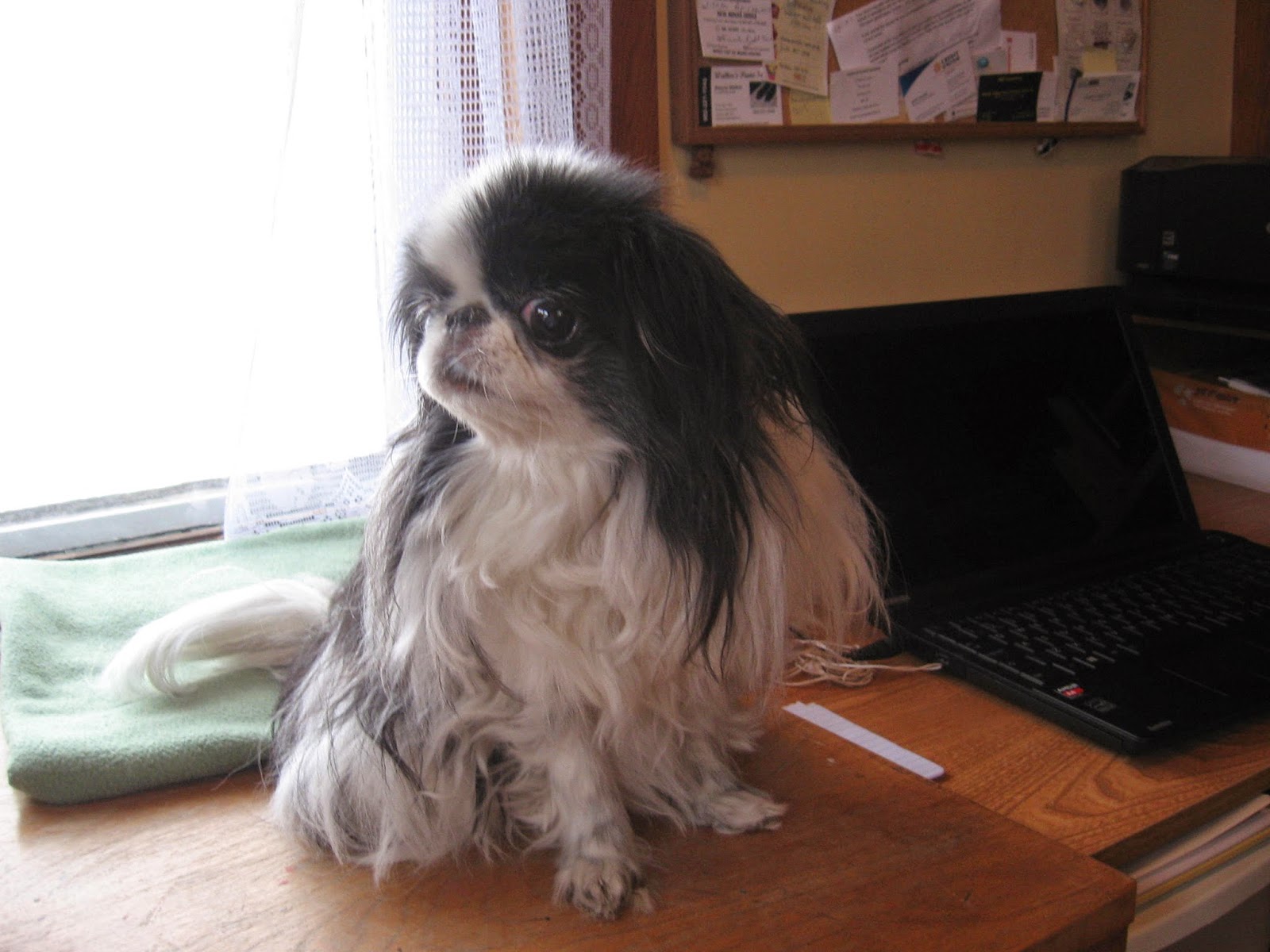 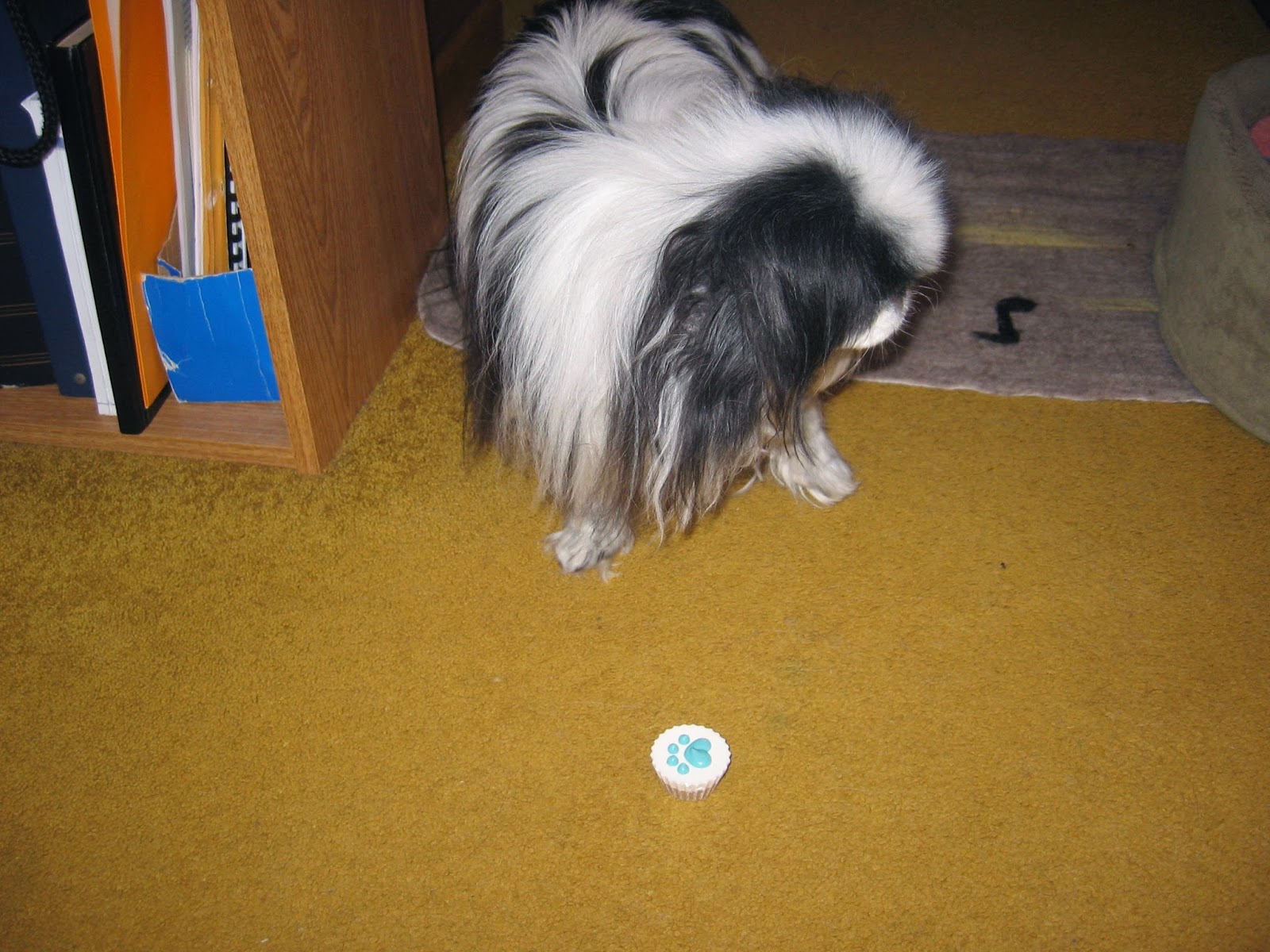 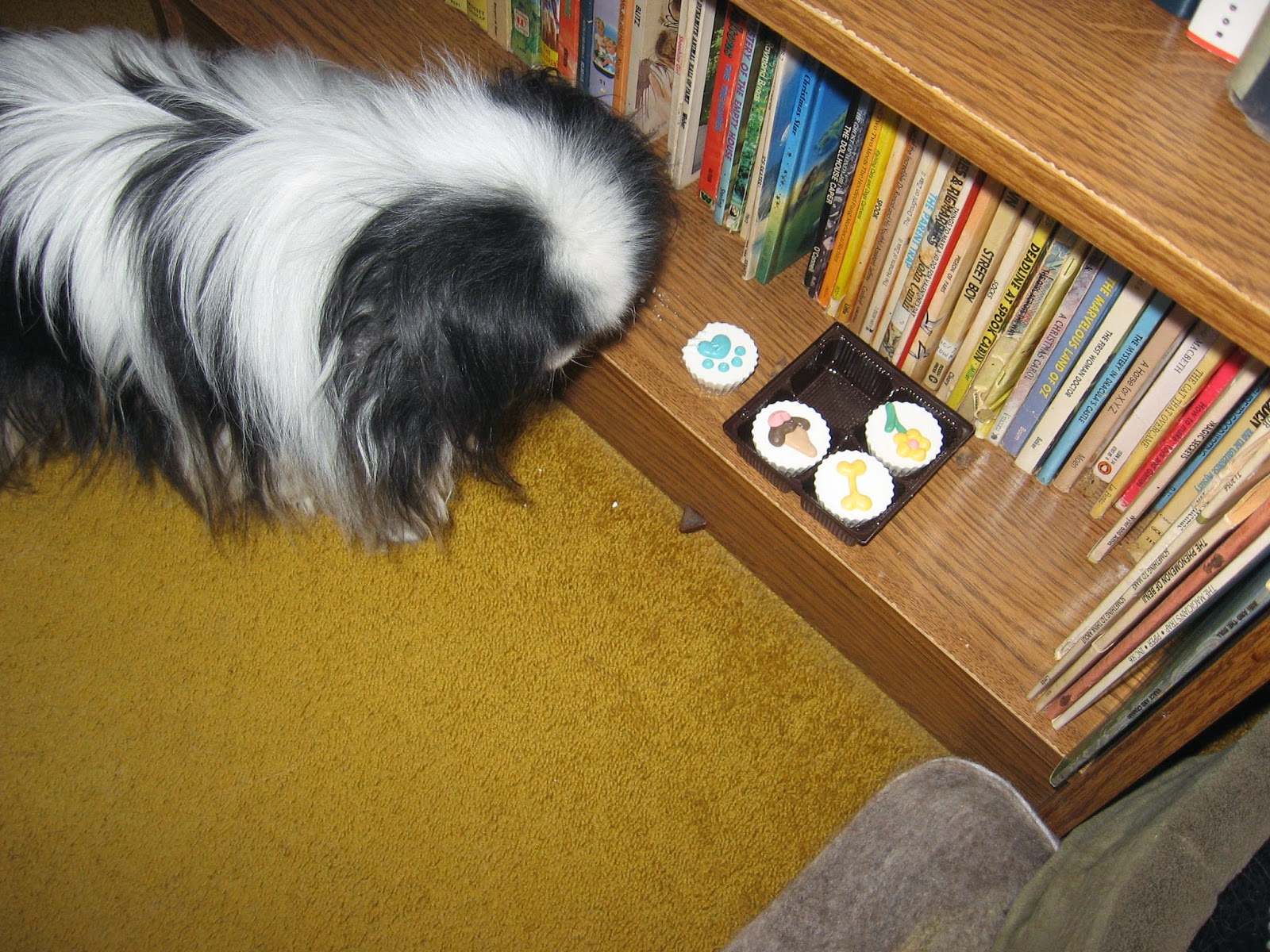 Actually there were 4 teeny tiny cakes,
which in turn had to be cut in teeny tiny pieces.
She only ate part of one. She's watching her weight. 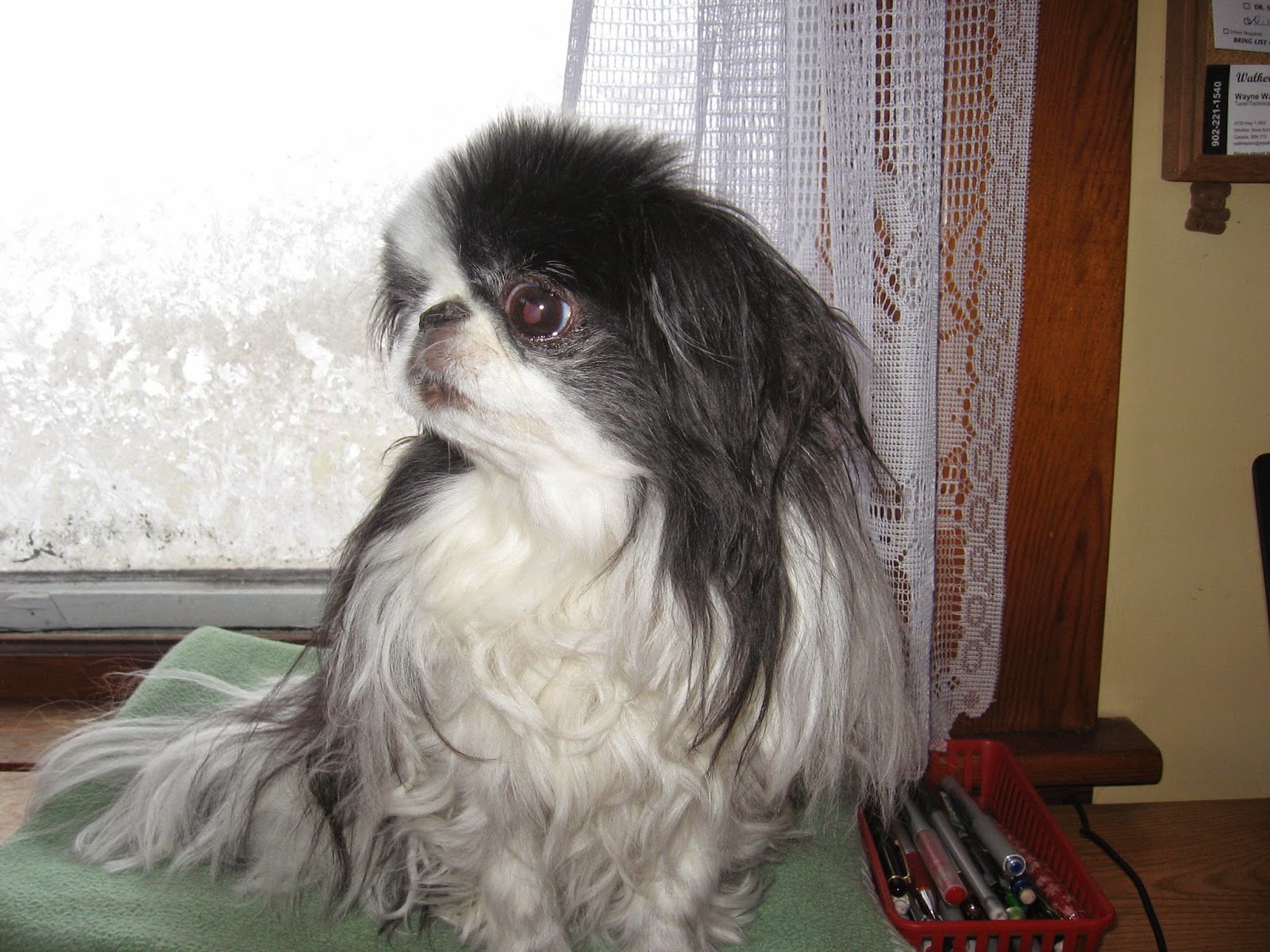 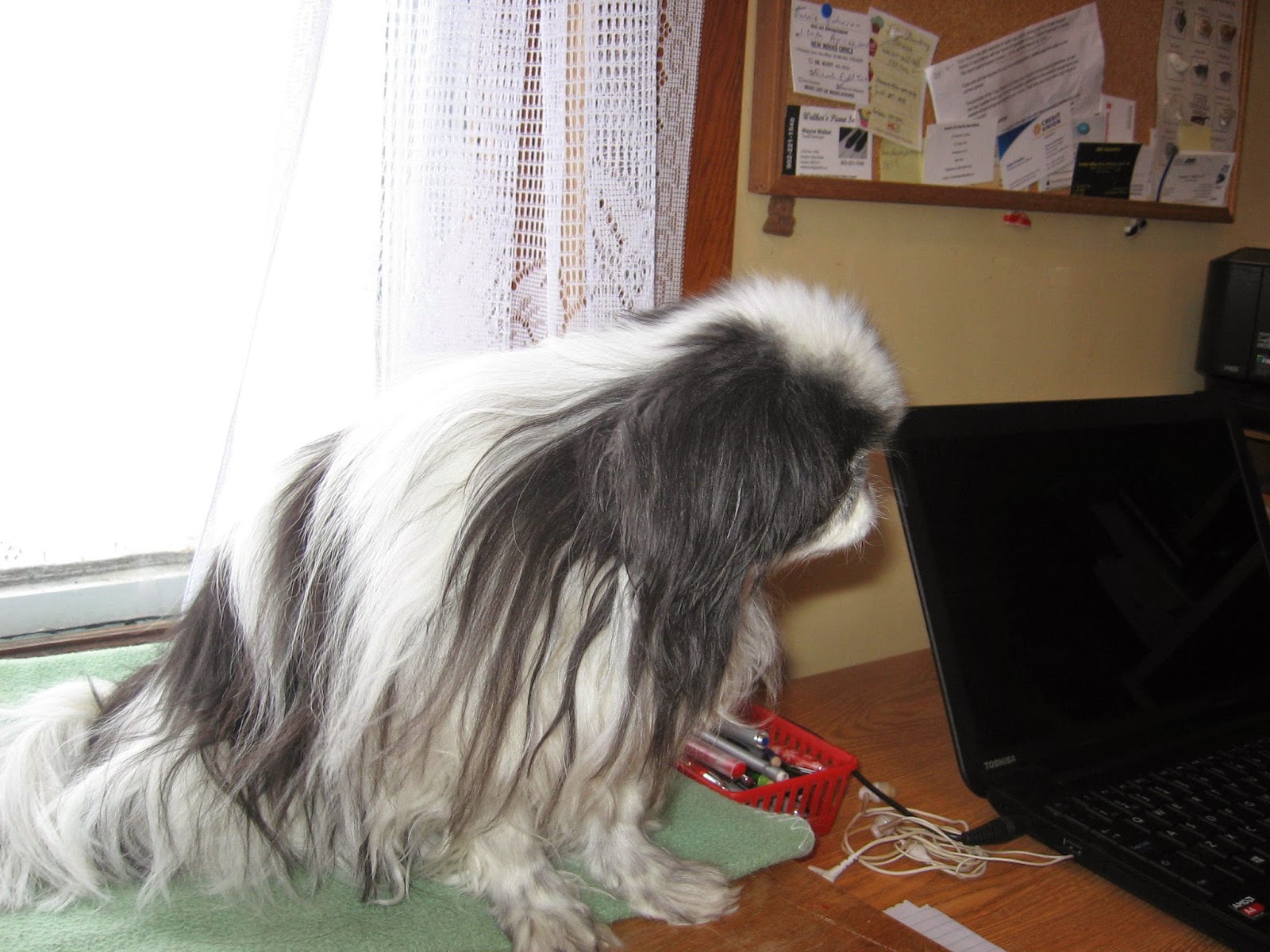 She is quite happy to sit on my desk, and look out
the window, except when it is frosted over,
then she watches me.

I think she may have celebrated to much yesterday,
as she is having a good nap this morning.

It is a 'storm day' here, and schools in the valley are cancelled.
I'm glad that I do not have to go anywhere today.

Went to the doc's yesterday and I'm good? for another 5 weeks. :)

Have a good day wherever you are.
Take it as it comes.
That's what Sadie & I do.

It is the first Sunday in January, and my first post for the New Year, 2015. It is my hope that in the next few weeks I will remember that it is 2015 when I write cheques.

It seems to me that last year, in January, Church was cancelled the first Sunday of the year, and now, with snow, ice pellets, freezing rain and wind this morning, our service is cancelled today. As I look out my window, it doesn't particularly look that bad, but it is totally overcast, and something is falling from that grey sky. Asked what I thought about cancelling church, I said that I would rather not be driving in freezing rain, if I had my druthers.  Sadie is thinking the same thing about going out.....
and has decided to sleep as long as she can. Right now she is lightly snoring. That is much better than coughing which she does, mostly when she is awake.

So today would be a good day for reading and perhaps adding a chapter to 'Barney and Belinda'. Just a few more lines to add for next post. I am determined to see where these characters lead me. They have been in all manner of situations in my head, and I am not sure where they will take me. Best get writing things down soon.

Whoops. Sadie just popped up and is coughing and bouncing at me, so it's time to stop now. She is definitely a spoiled little pooch. 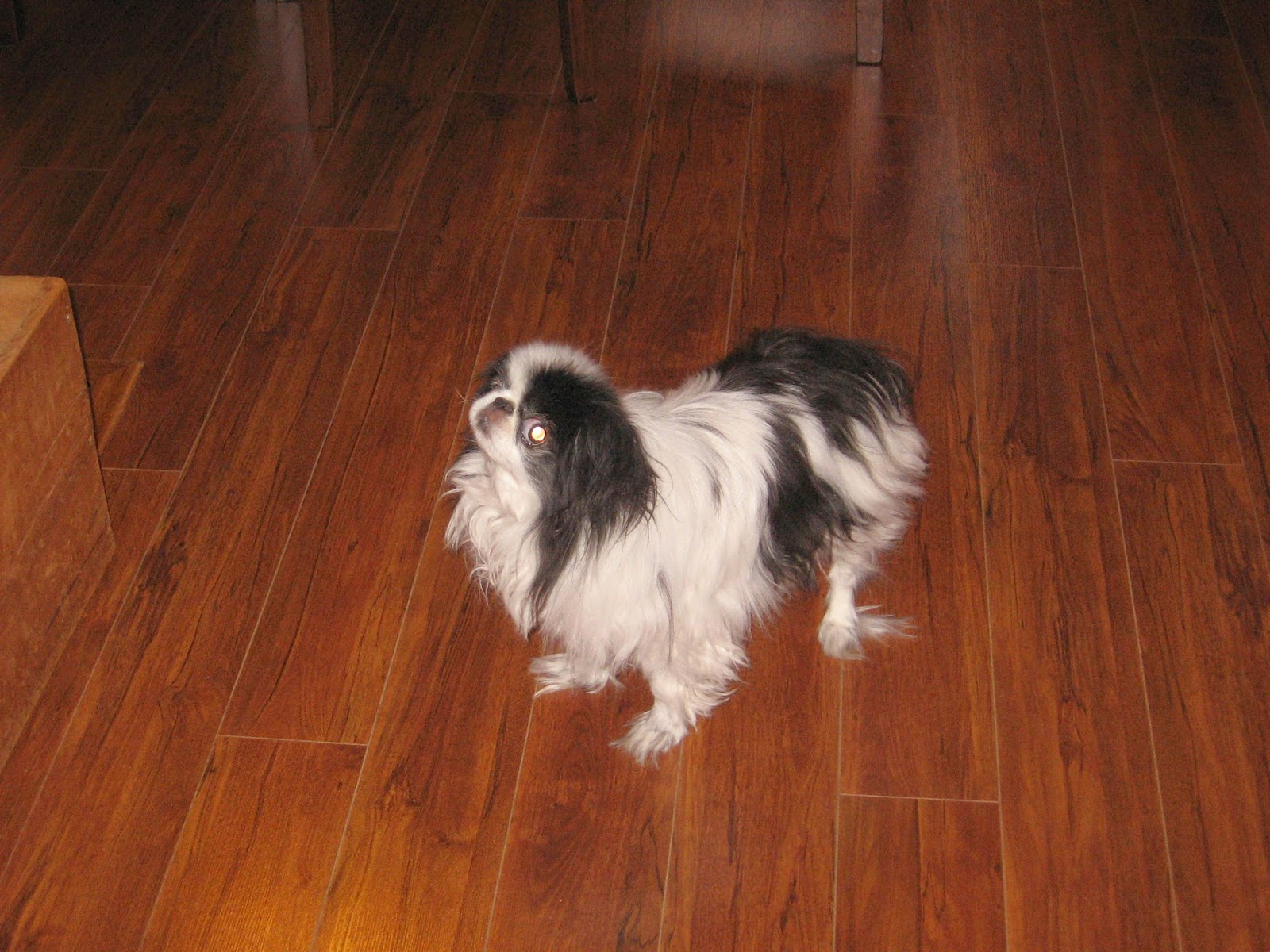 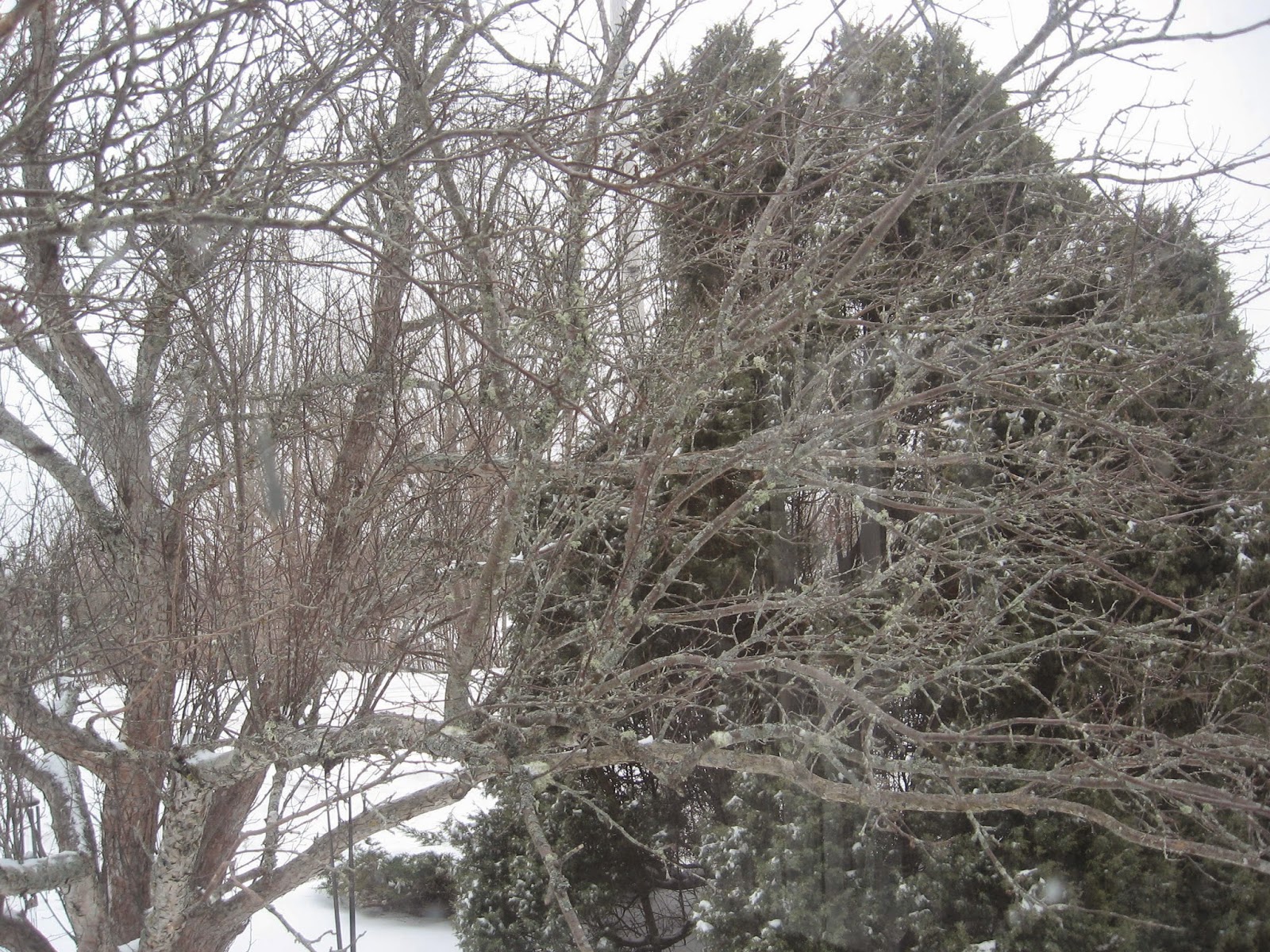 This picture is from this morning. We had our freezing rain, and then rain, and so the roads
are now wet, and the slush has been cleared off on our road.
Fog is settling in now.

Sadie was very appreciative of her special friend L who shovelled off the porch so she could make her way out. She wasn't long doing her business, and was right back in .

I don't plan to be going anywhere soon. I am tuckered out. Things will start up soon enough. As for now that hibernation cave is looking more and more desirable.

I'll leave you with an a quote from that famous person, anonymous :

Because we can't call people without wings angels,
we call them friends.
Posted by Bonnie at 4:41 PM 3 comments: