.....the first day of Spring.  The 1st day of Spring came with snow, freezing rain, rain, wind and school closures. Ah Spring, you disappoint. Perhaps if I wasn't so impatient for the change of the seasons, I wouldn't be so disappointed. Just when it gets a bit warmer and dryer, the weather changes and voila.... cold and snow.....

I have been very lax in posting, and it isn't the first time this has happened. I could blame it all on Aslan, well maybe not all of it, but he does take over the laptop as soon as it is turned on. 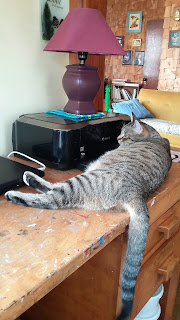 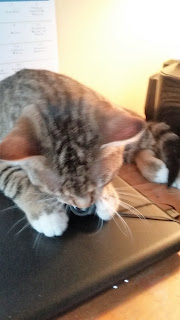 Here it is a week later, and it is about time I finished this 'draft'. I honestly can't seem to get done what I want to do. This is my 3rd week with a cold. I can't seem to get rid of it. I am functioning at a low level, but I wish that it would leave and I would get more energy. It seems I am always wishing for more energy. Perhaps Aslan would share some of his with me. The little rascal is a going concern.

Except when someone comes to the door and he runs and hides, or he is having a nap, he follows me around, checking on everything that I am doing. It is like he needs the attention and wants to be a part of what is going on. I was trying to get a card painted, and as he was sleeping somewhere, I thought I would have no problem.......I get my paints, water and brush out, and begin.......suddenly out of no where, in the blink of an eye, Aslan pounces......on the paint tin (thank heaven it was water colour), grabs the brush in my hand and here we go again. It put him on the floor and as quickly as I can, I put the things away. It matters not that I keep putting him down when her interferes....he certainly does not take NO as a threat.  I feel that I shall have to lock him in the bathroom, or in the basement, but I really wouldn't feel right about doing that.....time will tell. If I stand still for a minute he will jump straight up to my chest and expect me to catch him, then he purrs and rubs up against my face as though this is what I am meant to do. He is a riot, and one good thing about his antics is that he makes the Captain laugh.

Ah well, he is still a kitten, and I hope that as he matures he will be less of a pest. He is in hiding right now which enables me to write this without interruption, because someone came to the door. 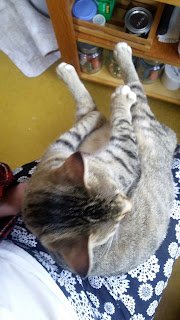 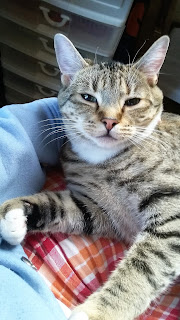 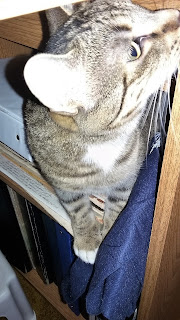 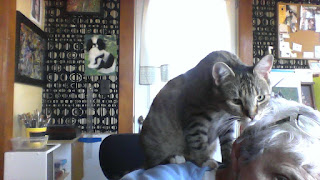 And so I bring this post to an end.
We had more snow last night.
Spring is dragging her feet,
though she will soon have to make an appearance,
Soon....let it be soon.